Has anybody any experience of Guardian Avionics?

It looks like you can connect up a pair of wires to the “worlds worst” GUI on the JPI EDM 700 (and the whole range). Also you can connect the Gamin G5 – both of which I currently have installed. It would give a nice engine display on an I-pad mini and it also it looks like it stores the engine data and puts it into the cloud when you have a Wi-Fi connection (ie one could set up a hotspot on your phone to dump the engine data)

Have I got this right? It could be so much better than the EDM700 display. 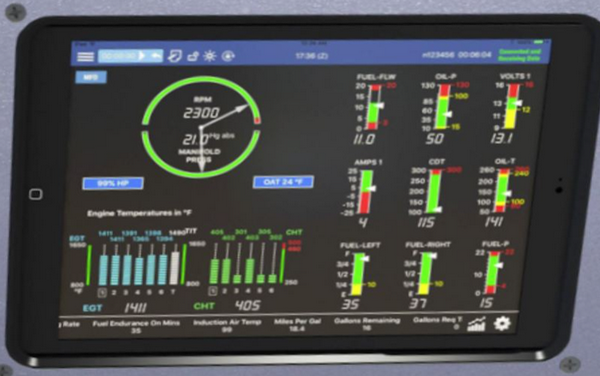 I haven’t checked that out, but my brother has programmed a Raspberry PI to store the data which comes out the EDM700 connector. The EDM700 just continuously puts out the data it obtains, in a plain ASCII format, including all the sensors which might be connected to the EDM700 (like fuel flow). Once the data format is understood the rest is simple. We put in another GPS receiver to have position, time and altitude. Prop RPM would be next thing to join in. For the moment, we just store the data to analyse it, but he already has plans to visualize the data during flight.

This is just “hobby”, which started as I asked him that I want to re-balance my GAMIjectors (where one cylinder seems to be slightly off, limiting my LOP operation). We just got it to record fine, and I just plug in the Raspberry PI and store the data from engine monitor. But the Raspberry can easily deliver the data on wifi, there are lots of pre-programmed tools for that. And as the Ipad is now capable of multitasking a visualization doesn’t seem to be a big step. However, as I said, it’s just hobby, and for me data storage was more important for now..

Can’t really read the numbers but that looks like a pretty big spread on the CHTs. Is it injected ? Also 405 would be higher than I’d like at only 23/21. Just wondering ?

This is a demo picture, exaggerating a bit so that anybody looking at the picture thinks that he really really needs such a monitor, just in case that one cylinder is so out of range.

UdoR
Germany
4 Posts
This thread is locked. This means you can't add a response.
Sign in to add your message