Meaning of SA and FT

A friend of mine is about to finish his PPL training and is now doing the ELP.

The preparation sheet looks as follows and he asked me what SA and FT meant. At first I answered “SA” is sand (which is IMO the metar code for sand indeed) and FT I wasn’t sure… feet obviously, but that makes no sense.

He then suggested that the SA represent the METAR and the FT stand for the TAF and that indeed makes sense looking at the information that follows the SA and FT prefixes. FT could be terminal forecast. SA no clue? 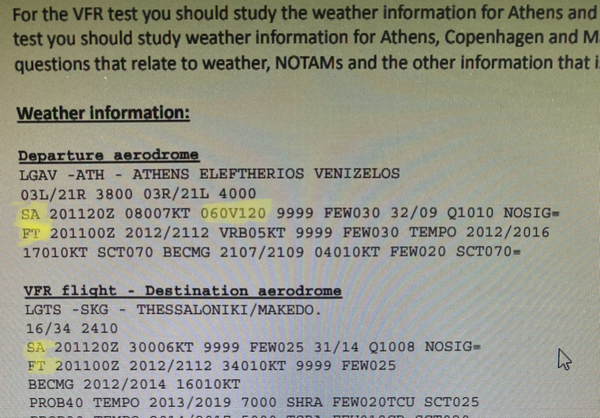 Has anyone come across this?

Yup, http://moratech.com/aviation/metaf-abbrev.html lists “FT” as both “feet” and “terminal forecast”, and “SA” as “Surface observation”.

I don’t remember ever coming across this before.


FT could be terminal forecast.

So I guess that is the limit between the two? Doesn’t seem to contain the FC/FT nomenclature, though.

I haven’t seen those abbreviations used in years. They were invented at a time when reporting was distributed via TELEX/Teletype and brevity was key. Since these reports are from 2000, some international weather offices must still be distributing their reports in this format. Many North American and EU countries have now replaced SA with METAR and FT with TAF. But the remainder of the message content is still in the same format.

The first two letters or word (METAR/TAF/SPECI etc) indicate the type of information (forecast or report). Weather phenomena are described within the report. The format and order of presentation of each message type is always the same.

SA stands for the aviation weather report at a station and corresponds to the currently used METAR.

There also used to be FA’s (Area Forecast for a given region), FD (Upper winds and temp forecast), and FL (Sigmet).

ICAO Annex 3 describes this, but there are national differences. These should be described in the MET section of any national AIM. Many countries have a brochure that describes all the various codes and format for that country’s met reports. E.g. for Switzerland (German version). The METAR/TAF message formats are described on pp 2-4. MCH_Flugwetter_Web_de_pdf

For someone looking for an English explanation, there is a good clarification of TAFs and METARs in the Transport Canada AIM MET sections 7 and 8 beginning from page 151. Note that this has some Canadian variations, but the vast majority of the information is internationally standardized.
AIM_2022_1_TP14371E_pdf

Patrick
Hungriger Wolf (EDHF), Germany
6 Posts
This thread is locked. This means you can't add a response.
Sign in to add your message