Slow and Safe on Twin Engines

What’s the C162 doing here? If it must really be discussed, cannot it be moved to a thread of its own?

BTW for safe flying on two engines, I think nothing beats the Cessna Skymaster concept. Why was it discontinued, and have no look-alikes?

Why was it discontinued…

Totally inefficient, because the rear propeller is operating in a combination of slipstream from the front propeller and the wing. About the most turbulent airflow one can imagine. So at best, it is an 1 1/2 engined aircraft when both engines are operating. And I am told that the maintenance of the rear engine is a real nightmare for the mechanics.

what next
EDDS - Stuttgart
Jan Olieslagers
13

Yes, I had wondered the same (about the aerodynamics). Still if the front engine quits than the other one will have less perturbed airflow to work on. The push-pull idea can’t be THAT bad, it was used on many seaplanes in the interbellum, and even on some fighters of WW2, like Do-335 ISTR? Actually, wikipedia even has following on this Do-335:

For safe multi engine flying you really need one of these babies:

Bwah, that’s a nice plane for sure, and it has the great merit of having actually flown. But to see this concept applied to the full, check out http://www.fantastic-plastic.com/BelGeddesAirlinerNo4Page.htm
Not that it has much to do with general aviation… 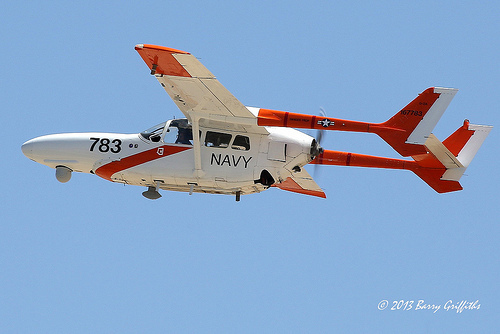 The worst of both worlds! I had a long chat with the pilot who flew these, and he said the aircraft was a poor performer, and much much worse than the original 337, with the rear engine failed!

The Air Cam really intrigues me, though is certainly a fair weather aircraft.

BTW for safe flying on two engines, I think nothing beats the Cessna Skymaster concept. Why was it discontinued, and have no look-alikes?

It turned out to be no safer than conventional twins. (Others have pointed out the efficiency problems. They are also very noisy. I knew someone who owned one and no one complained about his farm airstrip till he started operating the 337).

The thing is with the 337 the only way to know for sure which engine has failed (without pulling a throttle back) is to watch the EGT and see which one is falling (don’t forget that the constant speed prop will keep the dead engine turning quickly – probably full RPM if the engine hasn’t yet failed completely, and manifold pressure will stay at its full power setting). With a conventional twin you can instantly tell from dead foot = dead engine, and then can verify by pulling back that throttle. With the 337 you have to either observe the EGT and then verify by pulling that throttle, or guess and if you’re wrong try again with the other one – neither option is quick or ideal if an engine conks just after takeoff, both are slower and more hazardous than “dead foot dead engine”. You also got the situation with the 337 of people trying to take off with the back engine stopped (yes, this usually implies a lack of a power check) and running off the end of the runway or failing to climb above obstacles etc.

is certainly a fair weather aircraft.

In its present form, yes. Given an enclosed cabin and a slicker wing profile (neither of which requires big magic) would make it a decent VFR tourer, though. With (for a twin) very acceptable fuel burn, and still the added value of being a twin. Poor man’s P2006, it could become.

Then of course there was Burt Rutan’s Defiant.

Those planes were always in a category of their own. Such a pity they never got the push (or the pull?) of an able commercial department and/or investor.

You’re forgetting the failed Adam 500, developed by Rutan no less.
They used it as a drug running aircraft in the mid 2000 flick “Miami Vice” – even worse than the series…

It really amused me when they “upgraded” the twin boom push/pull piston configuration to a twin engine jet layout, dubbed Adam 700. Retaining the twin booms because that’s what they had… Talk about stupid design ideas.

Krister L
ESSB, Stockholm Bromma
29 Posts
This thread is locked. This means you can't add a response.
Sign in to add your message

Twin performance
Elba as our southern alternate
Does a long continuous descent save fuel?
If you were doing it all again....