Getting transits through French military areas and the Paris TMA

Yes indeed France has a lot of DAs and RAs but there are not so many “PAs”, especially in the west of France. Most areas marked P are nuclear power stations or high security prisons and they are very rarely a large area or go to a significant height.
DAs are as most outside the UK ie you can enter them at any time but if active you might be a bit daft to do so.
Crossing RA’s is normally pretty easy with a call on any of the frequencies mentioned in the complimentaire and are often very easy to transit otherwise either above or below.
I don’t know why @Peter seems to have so many problems navigating in France but as I learnt here and do most of my flying here I am not the best judge.

seems to have so many problems navigating in France

You can listen to the videos. ATC nearly always refuses a shortcut through these. Nothing to do with anything I am doing, AFAICT

There is no “navigation” issue as I use GPS.


You can listen to the videos. ATC nearly always refuses a shortcut through these. Nothing to do with anything I am doing, AFAICT

I suspect that the difference arises due to the flight rules.

The difference is likely to be significant. Under VFR, you’ll be contacting the controller who controls that piece of airspace, and asking directly for a clearance.

Under IFR, you’ll be speaking to an enroute controller, asking them to contact the relevant controller to relay a clearance.

You’re always, as with anything in life, more likely to get permission by asking the person with the authority to give it, rather than asking an intermediary.

In intermediary controller might not have the time to ask, might not explain what you want as clearly as you could, or might not be willing to act back and forth in a negotiation (eg, I can’t give you that track, but could you accept this track instead?). Far easier for the busy IFR controller to just say it’s not available.

But for the VFR pilot, talking directly, this is much easier.

Actually I fly both IFR and VFR in about equal measure. If I fly IFR I tend to automatically get clearances to somewhere along my route whether it is an RA or CAS, once I have opened my flight plan. Often I get asked if I would like a more direct. Occasionally this leads to an RA becoming active whilst I am en route. In this case there is sometimes a standby and then they will come back to me with a transit clearance for that RA (they will have spoken with the RA controller) or in cases, eg parachute training in a particular RA they will ask me to avoid it (if I am OCAS at this point). Once I have avoided I will get a continue own navigation or be given clearance to another point on my route. For the most part it all just happens and I only need to talk to ATC when being handed over to the next frequency.
VFR is more work in that I will usually tell the FIS that I will contact the RA controller for transit. Sometimes they will offer to see if they can get that for me. I have only once been refused and it wasn’t really a refusal, more a slight detour but still within the RA. But I don’t tend to try to transit an RA if military exercises are Notamed. If military controllers are dealing with Nato aircraft from all over Europe, you can hear they are a bit to busy to deal with a piston aircraft pooling through the final approach, as Tornados Raphaels, and Alphajets are coming in to land.

I did quite some low-level VFR flights to and through France, and to me it was a hassle. Workload for me was quite high, as you’re passed over from one frequency to the next rapidly and have to prepare a lot of possible airspace conflicts, especially those military areas, and this was with rather slow planes in the 80 to 100 knots region. However, not once did I have to divert from the planned GPS line or altitude flown. But above FL100 it’s another world.

In either the mil areas or the Paris TMA, I don’t recall seeing any differences below or above FL100. Although I am always IFR there, FL070-FL180.

The Paris TMA cannot be crossed below FL200, and that has been well known for years and frequently reported by others.

This illustrates the issues 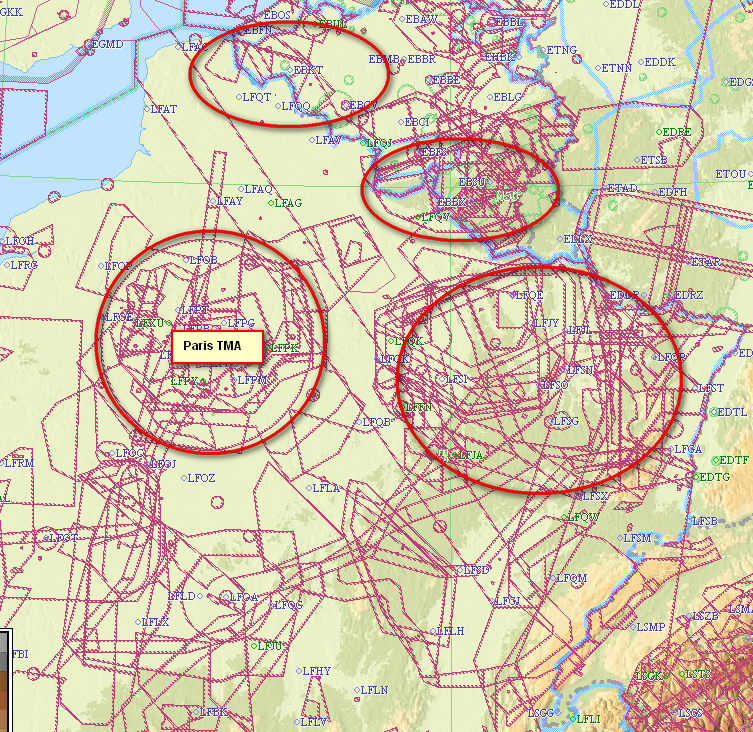 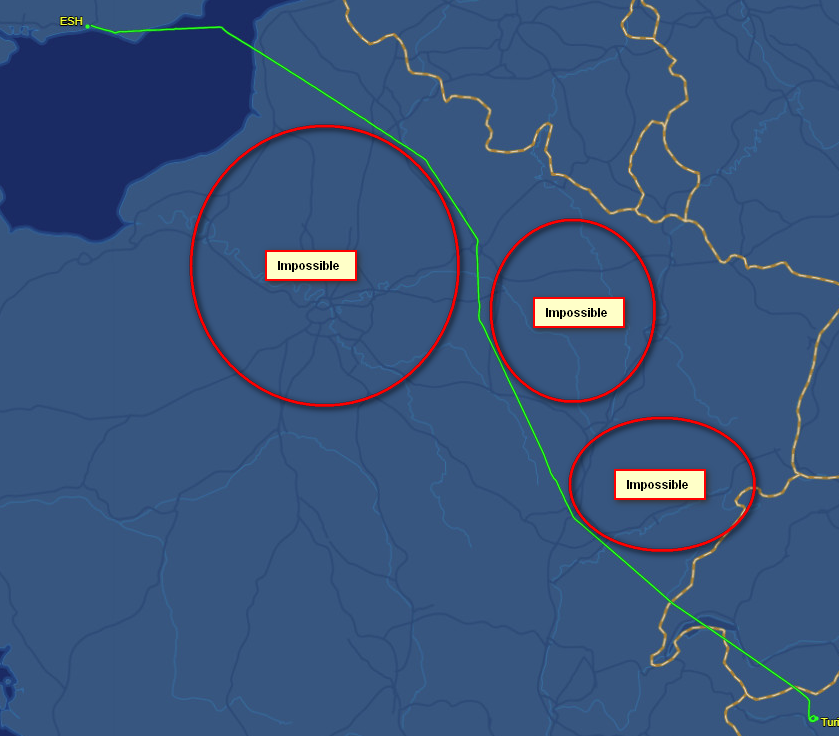 so if Gallois finds he gets transits through all this, “something extremely interesting” must be going on

Maybe flying at a few k feet, or being a French speaking pilot helps?

What I am finding, and it is quite obvious to anyone sitting in the plane (or hearing the entire audio track) although obviously it can never be proven, is that most or all of the time ATC do not even try to coordinate with any of the other units. They say they will but when you ask them 10 mins later they again say they will, and they hand you over to the next unit which also says they will, and 10 mins later again says they will

On the occassions you get more than this standard form of words is someone saying the “military is active”. But for these areas to be actually active some 99% of the time they would need more aircraft than the Waszaw Pact has got

I am not that surprised, however; a few years ago I was flying along the west coast, FL190, unable to go higher due to aircraft performance, on headings “to avoid” due to CBs left and right, and the ATCO was almost shouting in her mike “the military commander is very angry”. I just carried on, obviously. If the “military commanders” are like that, then obviously civilian ATC are simply not going to even try calling them up; it isn’t worth the hassle for them, their blood pressure, and some little plane. But they can’t tell you that; they have to always say they will ask, which, ergo, is what they always say…

I would be curious which military area one can’t cross direct while flying IFR? maybe those outside Class E & D? or really low level? or active ones during weekdays?

If one gets low between 3kft & 6kft, it gets easier to get IFR shortcuts when you tell ATC/FIS you are happy with “IFR non-controllé”, I have not tried to call ATC for restricted area myself, but for VFR sometimes you have to do it yourself when FIS are not reactive, the details are in AIP ENR5.1

Never had any problem but maybe it’s weekend/weekday, French RT or non-controlled IFR effect that I am missing…

I just flew around PTMA at FL70 (which is the min level) few days ago and even between Paris GA airports at 3kft-5kft sometimes, if you are inbound at FL150 it probably won’t work unless you are above FL250, you just have to look at old fashion ATS/airways chart, it appears there is nonoe

Curious lack of input on this topic from France…

Perhaps a French speaking pilot gets transits through these airspaces? I can’t think of any other explanation for the very different experiences reported.

It’s very difficult to comment without actually planning and flying the route myself.
I don’t quite understand why you want to keep swapping back and for between IFR and VFR and why if you are IFR with a FPL you feel it necessary to keep asking for clearances across RAs even if you are on an airway.
I am confused by your discussion with Lille on your return
Are you IFR or VFR for this part?

I have often flown VFR to Tours LFOT from Switzerland clearing customs in Colmar LFGA, and have never had an issue crossing the zone west of Colmar, usually at around or above the 5-6’000 needed to clear the Vosges hills. Either FIS arranges clearance through the military zones and passes it on to me, or hands me over to the military controller for the transit which has always been approved even during activity. With an S-transponder and an obvious steady altitude and straight-line track using GPS, the military are quite comfortable with the mix. They have even warned me of Mirages about to cross my track about 1’000 above or below me… impressive to watch.

chflyer
LSZK, Switzerland
16 Posts
This thread is locked. This means you can't add a response.
Sign in to add your message