There’s almost nothing in books or the internet about Wassmer, so a quick history.

Benjamin Wassmer bought an existing company in 1905 that made wooden parts (e.g. pulleys), and started manufacturing propellers in 1909. In WWI they opened a new factory in Issoire, near Clermont Ferrand in the Puy-de-Dôme, to fulfil large orders from the French military and to be away from the front. Between the wars they also made furniture from walnut, which grows in the Auvergne.

In 1936 Wassmer were awarded a Popular Front government contract for aircraft maintenance. In the 1940s Wassmer manufactured around 40 open cockpit AVIA 152A gliders under licence, then after 1945 they returned French and German gliders to airworthiness. In the 1950s they assembled 50 Fauvel AV 36 flying-wing gliders from kits for gliding clubs. 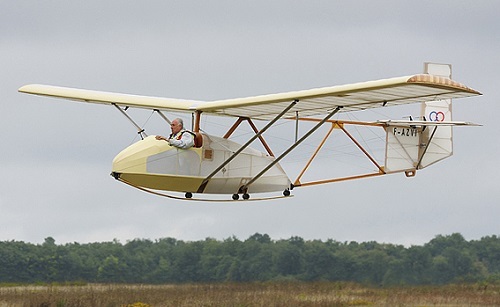 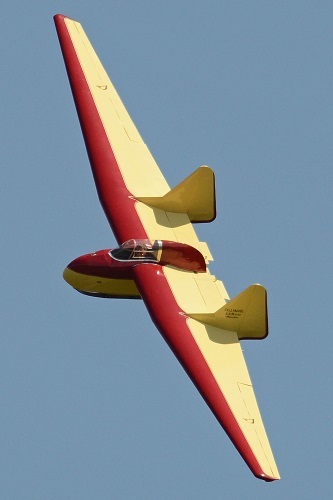 WA20
In 1955 Wassmer opened a design bureau with a view to creating their own aircraft. In response to state requirements the WA20 Javelot (Javelin) appeared in 1956, with plywood wings and metal tube fuselage. 3 prototypes and 9 production types were made, and it was considered to be an excellent training glider. It also used many composite components, which would become important in the development of their own aeroplanes. 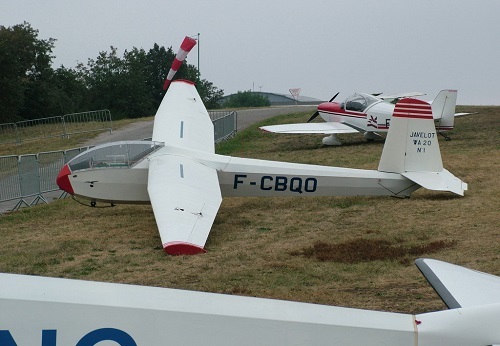 Two years later they released the WA21 Javelot II. Marketed as “from solo to gold medal” it conformed to international competition standards. After 3 prototypes, 60 were made.

The Javelot II was replaced by the WA22 Super Javelot in 1961, with much more reliance on composite components resulting in improved aerodynamics. 2 prototypes and 31 WA22s were wood and fabric, while 71 WA22 As were plywood. 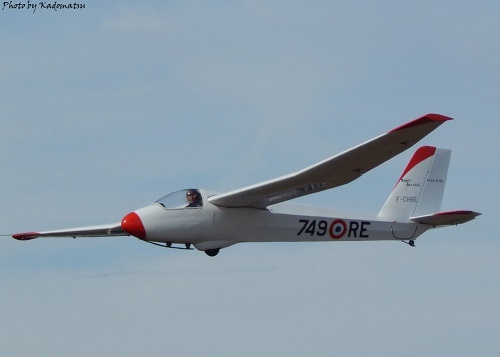 1967 saw the arrival of the WA26 Squale, essentially the Super Javelot with the fuselage completely made from composite. After three WA26 prototypes, 71 WA26 Ps added fibreglass cockpits, and a further 11 WA26 CMs had other improvements. In 1974 a fully composite version, the WA28 Espadon was released; 28 were made between the WA26 (retractable), WA26F (fixed gear), WA26E (fibreglass reinforced wing and fuselage) and WA26EF (fixed gear, reinforced).

WA30
In 1958 the two seat WA30 Bijave won a government contract for use in gliding schools. 3 prototypes and 279 gliders came off the production line. Ten years later the type was grounded after a series of in flight failures, immediately stopping WA30 sales and proving disastrous to Wassmer’s reputation, with most French clubs turning to imported German gliders. After two years of prolonged investigations, a plan for reinforcing the structure allowed the grounded gliders to be returned to service. 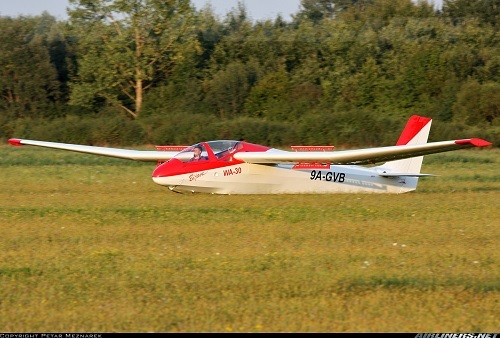 Jodel-Wassmer
In 1949 Wassmer gained manufacturing rights to Jean Délélmontez’s single seat D9 Bébé Jodel (~12 made, 27hp-45hp VW engine), then from 1952 the two seat D112 (65hp Continental A65); the early Jodels have different designators depending which engine was fitted. The success of the D112 with easily over 300 sold established Wassmer as a true aeroplane manufacturer. After collaboration between Wassmer and Délélmontez, the D112 trainer was developed into the successful D120 Paris-Nice, designed for longer trips (for example from Paris Lognes LFPL to Nice LFMN by factory pilot Hrissa Pellissier) with a larger 100hp C90 and better instrumentation, including extra ‘comfort’ specifications like soundproofing, heating and a baggage compartment. 341 were made in the following designations: D120 standard, D120 A with airbrakes, and D120R remorqueur (glider tug). 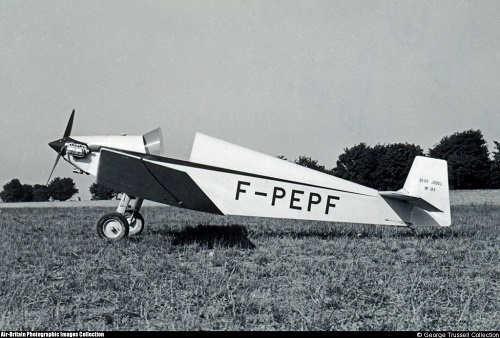 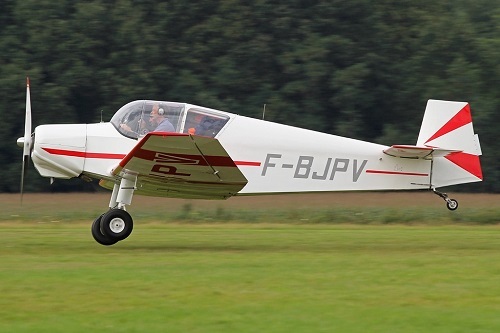 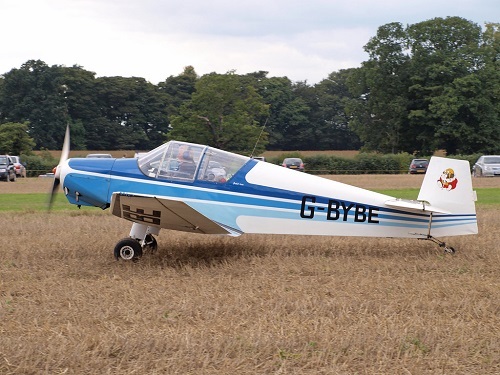 WA40
In 1958 Wassmer started a very ambitious project: to produce a fast and comfortable 4 seat touring aircraft (the fixed front seats are like armchairs). It was a big step from building small aircraft under licence and designing gliders, but the concepts and lessons were easily transferable. The WA40 Super IV (some models called Sancy or Pariou) used a wooden wing and metal tube fuselage, and for the time a large number of parts made from composites; the canopy slides rearward in one piece. With a 180hp Lycoming O360, variable pitch propeller and manual retractable undercarriage it was capable of up to 140kt cruise and 1400nm range. Depending on number of seatbelts, it can be a 4 or 5 seater. The WA40 had a straight tail, while the WA40A and WA40B had swept tails, which gained 1-2 knots. One aircraft was sold to Brazil, and Hrissa Pellissier delivered it in person, crossing the south Atlantic Dakar-Natal (1600nm in 12 hours). 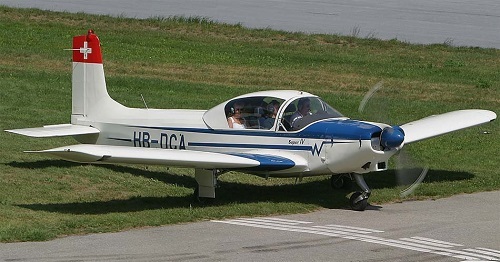 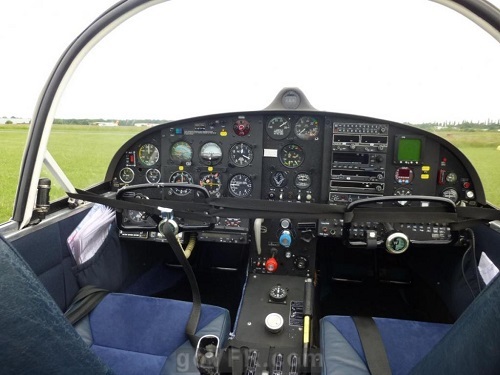 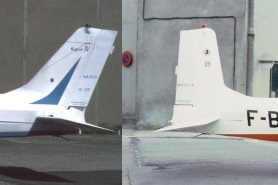 Comparison of the tails

A basic version of the WA40 was then marketed in 1965, with fixed pitch propeller and fixed undercarriage, and was called the WA41 Baladou. Non-complex, this was aimed more at clubs. Between the WA40 and WA41 167 were produced. 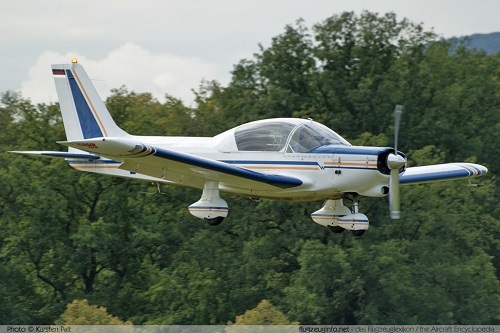 The last aircraft in the range was the WA 4/21 Prestige, released in 1967, which upgraded the engine to an O540 and IFR instrumentation. The prototype was equipped with the normally aspirated 235hp engine, and the 29 production aircraft had fuel-injected 250hp engines and were capable of 150+ knots. One example, F-BOYS, did the first French round the world flight and first GA Pacific crossing with Pellissier, and another, F-BPTG, was famously owned by Jacques Brel (and is still flying today). 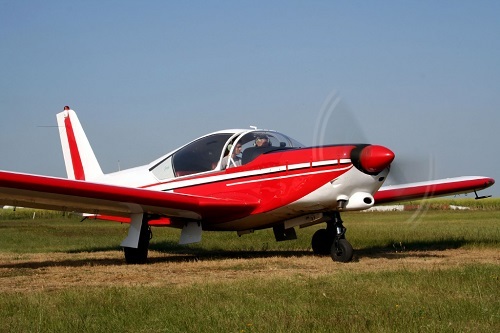 CE43
Near-bankrupt in 1971, mostly due to the Bijave fiasco, Wassmer is reorganised, and becomes part of CERVA, the Consortium Européen de Réalisation et de Vente d’Avions. Originally designated WA53, the CE43 Guépard(leopard) was the WA4/21 resigned to be an entirely metallic 5-6 seater (the last seat was in the baggage compartment and only for small children or unwelcome passengers) and is sometimes called the ‘French Bonanza.’ The manual gear became electric, as did the flaps. The majority of the 43 produced were sold to the Armée de l’Air as training aircraft. A version using the fragile 285hp Continental Tiara engine was the CE44 Cougar, and the later 310hp TIO540 CE45 Léopard does not seem to have flown. 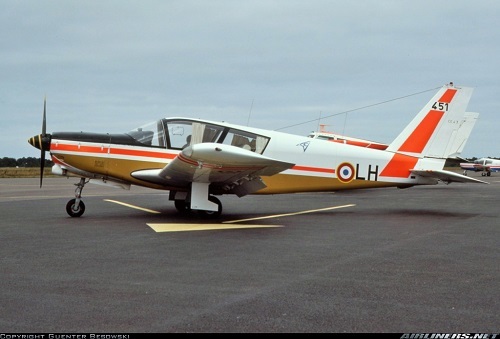 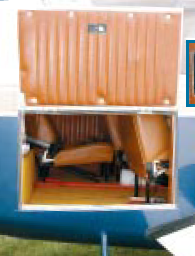 WA50
The cost of imported spruce becoming prohibitively expensive, and the American manufacturers having turned to metal aircraft, Wassmer decided to take the leap to design an all-composite aircraft. Drawing on experience manufacturing more and more parts for both its gliders and powered aeroplanes from glass fibre, Wassmer designed the WA50 prototype (2 built). Initially designed around the proposed Potez 115hp engine which never materialised, it ended up with a 150hp O320 with VP propeller and retractable undercarriage. The WA50 series is recognisable by its butterfly doors. 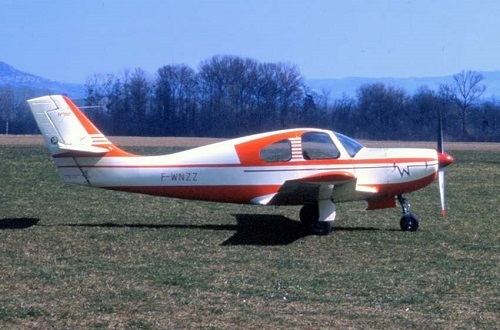 Following the prototype, the WA51 Pacific production aircraft was the world’s first certified composite aeroplane in 1969; 31 were built. The retractable undercarriage and VP prop were not carried over into the production WA51 which had both fixed gear and propeller. 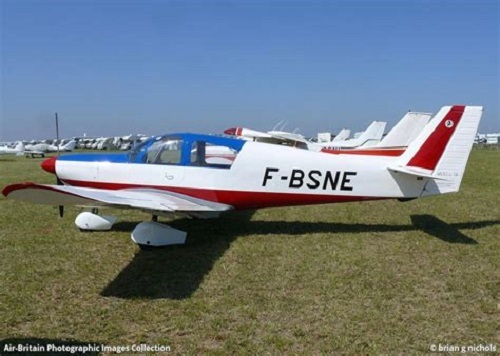 The Pacific was improved to the WA52 Europa in 1971 with 10 more horsepower, constant speed propeller, and optional fuselage fuel tank; cruise speed was 125kt and 59 were built. 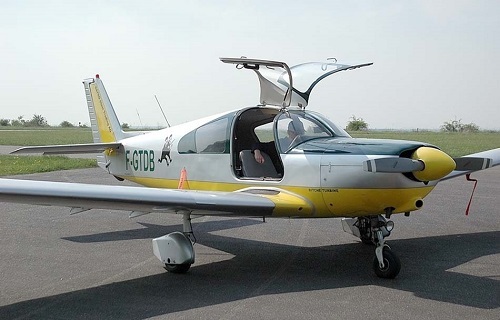 WA52 with the butterfly doors

The last of the line was the WA54 Atlantic in 1973, with 180hp O360 and constant speed propeller. Instead of the WA51/52 wheel fairings, it used the larger fairing from the WA41 Baladou to provide greater ground clearance for the propeller. They cruised at 140kt and 55 were made. 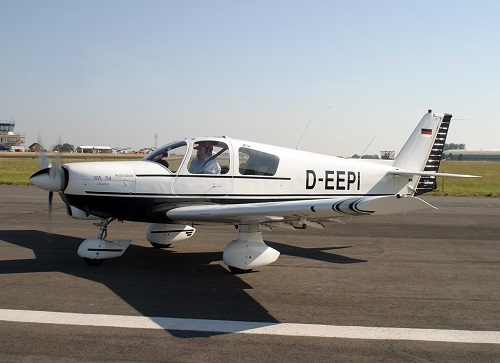 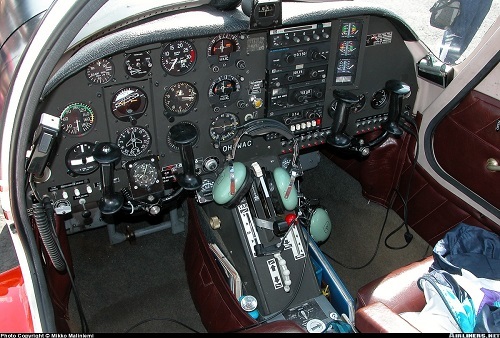 WA80
In 1976 a training version of the WA51 was developed, with 2 seats and a 100hp O200 engine; the wing tanks were replaced with a single central tank and this became the WA80 Piranha. Adding a rear seat it become a three-seater WA81, also called Piranha. 26 of the two types were made. A 120hp O240 powered WA83 prototype never went into production. 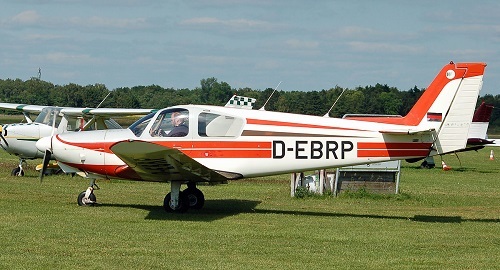 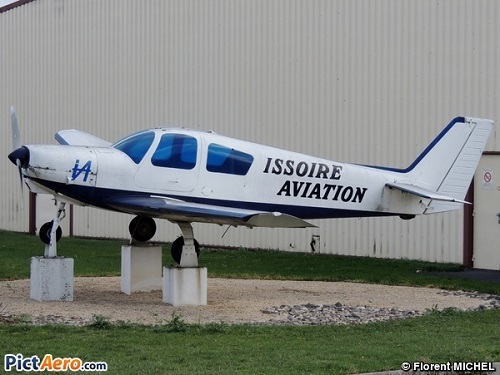 APM
CERVA, the last iteration of Wassmer, dissolved in 1977. Philippe Moniot was the technical director of Issoire Aviation when Wassmer became part of CERVA; he later bought out Issoire Aviation, then created APM (Avions Philippe Moniot), who produce the APM 20 Lionceau (lion cub), APM 30 Lion and APM 41 Simba at Issoire, all of which are fully composite aircraft.

R90
Horst Ruschmeyer, the German distributor for Wassmer, bought the moulds for the WA51 in order to develop his own type. After several prototypes, different engines and design changes, Ruschmeyer built 30 R90s, which had a new wing with larger tanks, retractable undercarriage, 4-blade propeller and a de-rated O540 producing 230hp. IFR certified, but the yoke was replaced with a stick. It was capable of 175kt, but was too specialist a type and was never commercially successful; Ruschmeyer Luftfahrt Technik went bust. 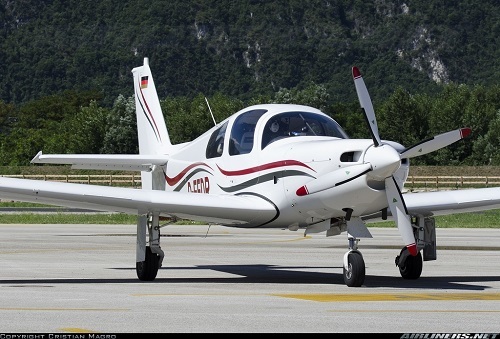 Some speeds are book values, so may be lower in real life.

Wassmer are now orphan aircraft, with no-one looking after the type certificate (Issoire did until recently and have service bulletins etc at http://issoire-aviation.fr/documentation-technique.php.

There is almost no information available about Wassmer. The invaluable source for all this is Pierre Corny’s http://historique.wassmer.free.fr/ comprehensive website, either directly or reading the many magazine articles stored.

The Wassmer owner’s club is http://wassmer-passion.org/ and three pages of photos from aviation le Havre are 1, 2, 3.

The http://www.rightbase.nl/home.html R90 website has loads of information on the R90.

Very interesting details, a lot of types and multiple materials of construction. Thanks for posting!

One of Arnaud’s aircraft F-GAIF flew all the way to Abbeyshrule in Ireland. It sat outside from the day it landed and never turned a blade. Bits got robbed from it, and now it’s just not worth saving. New owner was never around. Strange one.

Thanks for that information. The ICAO identifier for the Jodel D120 is WA12. All other Jodels are D## or DR##.

Thanks a lot @Capitaine for this write up. Lots of very useful information.

Impressive review, thanks! These high quality writeups really deserve to be searchable under wikieuroga or something.

I remember seeing a WA40 at an airshow many years ago and was intrigued by the design being quite ahead of its time in its use of composites.

Thank you Capitaine. Wassmer deserves a little remembrance.
It is a shame APM doesn’t sell more, these are great airplanes. I hear they don’t really want to, I hope they will invest more in the future.

One for sale on planecheck

Capitaine
EGHO-LFQF-KCLW, United Kingdom
19 Posts
This thread is locked. This means you can't add a response.
Sign in to add your message