Just when I thought it was sad to see the lack of development and new things in the SEP industry, I ran into the Pipistel Panthera website and was really impressed by the design and the advertised specifications. Of course, the price will probably be just as impressive but still, a 200kts cruise speed for 10 gals an hours sounds too good to be true. And it probably is. What do you guys think ? 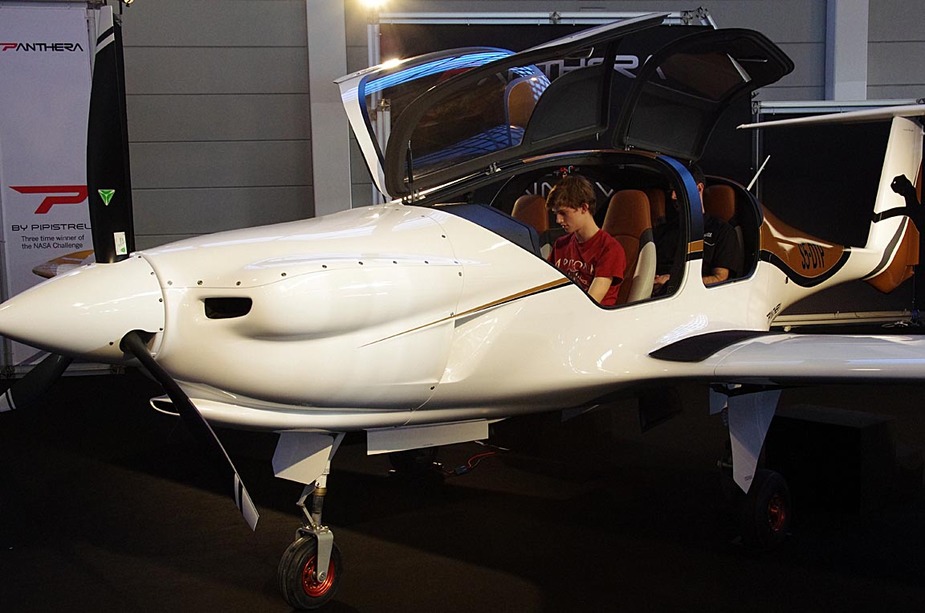 I don't think the performance is unrealistic (the 200kt would be TAS at some high altitude). These people (I have spoken to them) are very good engineers and know what is involved.

It's a cleverly designed cockpit with a small cross-section but is comfortable enough.

This was originally slated for a first flight in October, but this doesn't seem to have happened.

I was a little surprised to read on their website that they aren't bothering with a DME or ADF - that EASA don't consider either necessary. Right now this doesn't seem to be the case - maybe in 3 years when they start shipping them it will be (we can only hope...).

Having said that, I really hope it delivers 80% of what they're promising - if so I'll be first in line when they get it certified.

Some of the other Pipstrel aircraft that are in production are equally impressive, although suffer from absurd names. I've always like the look of the Virus SW...a high wing 2 seater, Rotax 912ULS powered airframe which has won a couple of NASA CAFE foundation prizes. 147kts @ 18l/hour with a 311kg payload. Not everyone's cup of tea, but would probably cater for the majority of PPL's flying activities.

Interesting to note, whilst the Panthera has a cutting edge airframe, it will still rely on a 1950's engine up front. I'm sure they'd love to use something a bit more contemporary, but I suspect that all things considered, an IO-390 represents the best option. Sad things haven't moved on, but I guess innovation is the first casualty in an industry that is ultra conservative and devoid of healthy competition.

There may be some light on the horizon - ULPower are starting to expand their range to produce up to 200hp engines. Not completely radical, but a sensible step in the right direction.

That's not a problem. The SFC of those engines is better than that of any modern petrol engine.

They do have their issues, the biggest one being that to achieve light weight they use air cooling with thin metal sections, and as a result require careful thermal management, which means one has to use the mixture lever with a certain (nonzero) amount of intelligence.

Also I think the IO390 will come with electronic ignition by then, which addresses the hassles with magnetos, but only if done correctly i.e. with an autonomous power source. It would be a retrograde step to do the Diamond solution where if your electrical power goes, the engine stops. I spoke to Lyco this year about it and they said the system is self-powered, which would be OK.

IMHO, for the Panthera to start off with an unproved engine, would be a risk too far. Look at Thielert - that debacle nearly brought Diamond down. The Panthera is a nice new plane but really it uses proven bits all the way through, so any issues they might get should be mostly trivial ones. I would probably buy a brand new Panthera.

They do have their issues, the biggest one being that to achieve light weight they use air cooling with thin metal sections, and as a result require careful thermal management.....Also I think the IO390 will come with electronic ignition by then

The IO390 (apparently) are 140kgs. That's 32kg's heavier than the ULPower equivalent. Presumably that weight penalty is carried in the old fuelling and ignition components, as I would imagine moving engine parts and cylinders weight roughly the same.

Of course, using decent EFI means you always get optimal fuelling, irrespective of the flying being done or the intelligence of the operator. As a fringe benefit, one would imagine it has associated safety benefits - all that time faffing with the mixture and engine computer can be spent with your head outside the cockpit

You don't need much.

Climb full-rich, or if you want to climb higher (say 8000ft+) then use the constant-EGT method.

Once level in cruise, set RPM and lean for peak EGT.

That is essentially it.

This is why, despite all these supposedly "prehistoric" engines, the actual market pressure for FADEC tends to vapourise as soon as people realise the extra bits needed. I don't think it is just American conservatism; I feel the same way. There are far bigger fish to fry in flying than the mixture lever

The IO390 (apparently) are 140kgs. That's 32kg's heavier than the ULPower equivalent. Presumably that weight penalty is carried in the old fuelling and ignition components, as I would imagine moving engine parts and cylinders weight roughly the same.

A very good Q. Looking at how a Lyco engine is made, it's hard to see how it could be much lighter (short of using materials like magnesium cases, titanium conrods, etc).

The fuel servo and pipework weighs nothing really. The magnetos do weigh a few kg, but a self-powered electronic ignition system must weight a bit.

The really huge way to make an engine lighter is to make it rev higher (HP = rpm x torque) so the pistons are smaller, the crank is smaller, etc. But then you need a gearbox... The UL engine is going at 3200rpm at max power, so they have pushed that as far as they possibly can for a direct-drive but I wonder if they have done research on noise figures?

In the grand scheme of things, IMHO, 32kg is not relevant and certainly not a reason to go for an unproven engine. It's about 3-4% of the empty weight and you could save that using titanium instead of steel here and there.

The forward visibility appears restricted, and I'm having a hard time imagining the doors will seal quietly.

For some reason they've seemingly chosen an MT wood prop with fiberglass cover and crude 'stainless' leading edge that is both soft and corrosion prone. I own and operate one of those props, and compared with the engine it really is old-timey technology!

Re 3200 rpm versus 2700 rpm, yes going faster saves weight. The reason most aircraft engines don't go faster is because at the power level and prop disk size they operate, 2700 rpm is a good number for good engine and prop efficiency. If for reasons of expedience and development budget your 'big' engine is smaller engine with extra cylinders added, you end up at high rpm regardless. Lighter perhaps, and probably less efficient.

For their 97bhp engine, Ulpower quote an SFC of 0.3, and between 0.25-0.31 for their 130bhp engine. Presumably, one would expect no less and possibly better efficiency from their 200bhp engine. How does this compare with Lycosaurus lumps?

In the interests of avoiding thread pollution, this can keep for another thread

masterofnone
EGKA
552 Posts
This thread is locked. This means you can't add a response.
Sign in to add your message