Hello all,
This is my first post on here so just a quick bit about myself. I’m 26, flown gliders for 5 years and had a LAPL A SEP for 4 months. I’m missing my left hand so have had to adapt things over the years but that’s part of the challenge! I have around 330 hours in gliders, 25 hours in TMGs and 15 hours in SEPs.

Anyway, off to the point of this Thread. 6 months ago I bought a share in a Fournier RF3 and at the back of the hangar was this rather small looking thing that had a full set of covers on which were a tad dusty. After a month or so I started having a look around it and googled the registration G-TICH. I saw it hadn’t had a permit for a few years and only had 50 hours on the airframe, which was a bit surprising. I have a bit of a habit of impulse buying (Ask Sheldon – I’ve known him for 13 years) so I wrote the owner a letter to see if he’d sell me his very under-utilised, pretty little aircraft. Long story short, he did! I bought an aeroplane with no permit and by that point, no license to fly one! It was a complete gamble.

After buying the Titch, I set to work doing the very few bits needed to get it through a permit. The biggest part and the most daunting for me was a new aluminium strip was needed to attach the top cowling to the firewall. Luckily Sheldon did a CAD drawing from a picture I sent him with just a photo and a measuring tape, got it laser cut and he fitted it – it worked perfectly!

By this point, a month later I had just passed my LAPL A skills test and converted to Tailwheels in a Cap 10. A Titch is most definitely not a first aeroplane as so many people told me. She’s reasonably fast with a 130kt cruise with her 0-200A, very manoeuvrable and will bite hard if you make a mistake. My LAA coach who converted me to the Cap 10 completed a series of test flights in the Titch and was happy to sign me off to fly her. My first flight was at Duxford airfield. Sat amongst spitfires, a hurricane and many other warbirds was quite an experience! Long story short, she was an absolute delight! She’s very light and very responsive on all 3 axis. She stalls flaps down around 44kts but bites hard with an aggressive left wing drop. The approach and landing was uneventful, the flaps are pretty hopeless although the nose down pitch change does allow a bit of forward visibility on approach.

I have now flown around 6 hours in her and am absolutely thrilled! Yes, it’s not a practical aeroplane & only has a 35L tank up front, but shes great fun and rather pretty to look at! Most satisfying of all however, not only do I own an aircraft which has always been my dream, I have an aeroplane that I was advised was unsuitable at my level of experience. The Titch like any aircraft has to be respected and you have to be ahead, but as long as you don’t push your luck, is a beautiful aeroplane to throw around the sky!

Used a search to find a picture, what a nice looking aircraft, looks a bit like a Formula 1 Reno racer. Congratulations on bringing her back into the air.

Had to google too. A nice little airplane. You should post some pictures

The first Titch I saw was in 1981, red in color, HB-YAM the callsign, in the big Swissair hangar at ZRH airport, appealing single seater cutie. The builder was in the final assembly stage. If I recall correctly he didn’t get to fly it, and sold it. Unfortunately the story of this very Titch ended in a dire outcome…
Nevertheless, this was my first real life intro into the fact that one can build his own aircraft. Imagine, spend a few years (yes, countless dedicated hours) building, and then fly your own handcrafted machine! I was, and still am, in awe at anyone having built and flown his own ship 👍🏻👍🏻👍🏻

Wish you many hours of enjoyment, and please remember the 2 bags, experience vs. luck, never have either one empty

Dan
ain't the Destination, but the Journey
LSZF, Switzerland
WilliamF
05

Congrats, know Top Farm well some characters there for sure.

Who’s Sheldon? I was trying to figure that bit out. Looks like a hot ship to be able to manage with a new license. You must be good!

and for those curious about the design, here’s a short descriptive sheet CONTACT! Magazine Issue 94
even better, a very interesting vintage doc here “The Story of the Taylor Titch edited”

Dan
ain't the Destination, but the Journey
LSZF, Switzerland
Dan
07

… finally found some info re the only Swiss built example mentioned above (German language): Flugzeugbau in Seebach 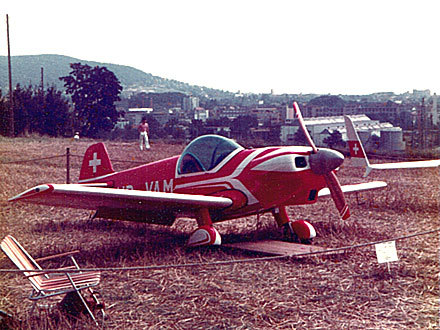 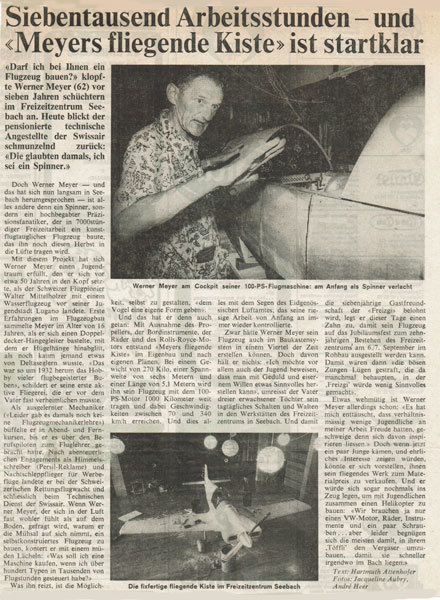 According to the local paper, Werner Meyer spent close to 7’000 hours of work to complete that little machine. Hats off to such dedication 👏🏻

Dan
ain't the Destination, but the Journey
LSZF, Switzerland
LeSving
08 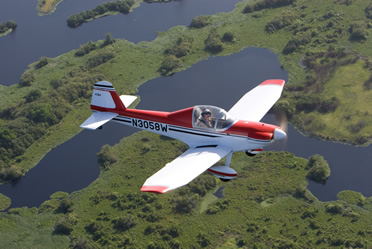 One has to wonder about this fancy for wooden designs after the war, when aluminium is so much easier to work with. 6061 (or the similar 6082) lasts forever, literally corrosion free, and is much cheaper than the exotic woods used.

as history recalls, aluminum was scarcely available during and after WW2, witness some magnificent designs such as the DH-98 Moskito or the Spruce Goose…

Regarding aluminum in aviation, there are unfortunately countless examples of corroded parts, airframes, struts, spars, you name it. And today’s design homebuilt mostly use 2024-T4 for the skins, ribs etc, and 6061-T6 or equivalent for longerons, brackets, etc.

Dan
ain't the Destination, but the Journey
LSZF, Switzerland
LeSving
10


as history recalls, aluminum was scarcely available during and after WW2

Probably, but mostly in Europe I would think. The story of 6061 is another thing. Sonex was the first kit manufacturer using 6061 in the entire structure. Today, most new designs are made with 6061. It’s considerably weaker than 2024 or 7075, but virtually corrosion free. For small planes, strength is not really the issue, rigidity is. You can only make aluminium sheets so thin before they becomes way too flimsy.

Lots of habits in aircraft design. People tend to simply continue doing what they always have done. Not a bad thing, but it takes time for things to change.

LeSving
ENVA ENOP ENMO, Norway
32 Posts
This thread is locked. This means you can't add a response.
Sign in to add your message

Deadstick Climb Out
GA / flying books... recommendations
Across the pond in a microlight - completed
Good ways to determine cloud tops before flight?