I operate within a group of 8 pilots sharing a DR400/180. Most of the time
our pilots go for 1 hour flights outbound and the return. But it all becomes
very samey. In an effort to liven things up, I suggested earlier this year that
we might try “combined-ops”. We would have one crew flying to a
destination with a different crew doing the return. The benefits as I saw it,
were travelling a reasonable distance without the drag of having to do the return
flight. Cost came into the proposition as well, as doing half the journey meant
half the cost.

So it was agreed that Gibraltar would be the destination. As things turned
out we could not get a full crew for the return flights due to work commitments
etc. So I would fly to Gibraltar with my colleague Martin and our other colleague
Tony would rendezvous with us at Gibraltar and fly back with Martin.

The 10th June was our start date, and we flew the first leg from Nuthampstead
(our base) to Calais. Lunch and refuelling were followed by the next leg to
Chateauroux Deols (LFLX). This leg was flown at 3500’ft under an overcast
sky due to a weak cold front moving south east over France. It was very gloomy
at times but it didn’t amount to a problem. All the restricted airspace
to the west of Paris was transited seamlessly, being passed from one controller
to another. After just over two hours we arrived at Chateauroux, an airfield
that from its website you would expect a high level of commercial activity,
but in reality it was totally quiet. Refuelled and flight plan filing done (via
Skydemon) we were off for the third and final leg of the day, to San Sebastion,
Spain (LESO). The daunting military areas in the Biarritz area were transited
without any deviation to our straight line course, mostly flown at 6500’ft
above the broken Cu/St Cu layers below. The fact that this was late in the day
probably meant the military had gone home. The approach into San Sebastian was
over the sea and harbour on to the runway which sticks out into the bay. Our
accommodation was arranged by texting my Mrs once we were ready to depart on
our last leg and she would then book somewhere on Booking.com and text me the
details. It worked flawlessly. 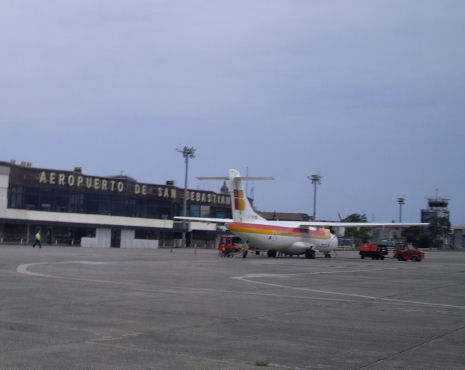 Next day the 11th June, Martin flew us from San Sebastian to Valadolid (LEVD)
in about 1hr 30mins. This is Vittoria airfield near Valadolid: We had some low stratus to climb above leaving San Sebastian, but it soon turned
into perfect VMC. Valadolid was large and empty. No hanging about we refuelled
and flight planned for Seville (LEZL). This was direct, no waypoints, straight
over the mountains with my Garmin showing plenty of brown terrain. There was a lot of towering Cu, well spaced out with trails of rain falling,
but easy enough to steer around. I tried to climb above the cloud but due to
not being oxygen equipped and the aircraft performance well down in the high
temperatures (+8c at 11,000ft), I gave up and descended to a more breathable
level. Seville started off well with the fuel truck arriving immediately after
shut down, but quickly descended into farce with the fuel man demanding VAT
numbers or his hand held card machine would not work. We decided to refuel the next day so proceeded to trek off to find the control
office. The temperatures were in the high 20s and we began to get frazzled.
Nobody seemed to know anything about the control office as we went from one
official to another in the very busy terminal. Eventually we found the office
and quickly realised that the cause of all the hassle was our failure to appoint
a handling agent. We had had an email from Seville which we chose to ignore,
that stated that any flight departing a Schengen country (Spain) to go to a
Non-Schengen country (Morocco) must have a handling agent. Next day (12th) with
the handling agent on site, we managed to get refuelled after 1hr 30mins, and
set off for Tangier. Twenty minutes into the flight and feeling pleased that
we had left hassle prone Seville, I suddenly realised that we had not put on
our life jackets! So whilst I clambered into the back of the aircraft, Martin
did his best to keep us going in the right direction. With prejudice aforethought,
I was expecting Tangier to be the place were we would get all the hassle and
bureaucracy but it was not so. The people there were all smiles and friendly.
We were driven to and from the parking area in a police jeep. The landing fee
was most welcome – 2.5 Euros! It can get windy there: Now for the last leg for me – Tangier to Gibraltar. The wind was down the runway,
28kts gusting 38kts. We went up as if in a powerful elevator. Turn out over
the sea and soon in contact with Gibraltar with our PPR number. There was a
Notam in force which stated that there was a Nato exercise in the straights
between Morocco and Spain and that any “deliberate overflying of the ships
would be regarded as a hostile act”. We didn’t see any ships! The
RAF controller kept us in the middle of the channel until we could see the Rock
where we were told to turn left and fly up the middle of the bay. Then we could
see Gibraltar airport on our starboard side and with a right turn we were on finals. That was it. I had landed on the Rock; something I had wanted to do for a
long time. The next part of the joint-ops idea depended on our colleague, Tony, arriving,
otherwise I would be doing the return journey as well. After half an hour in
the terminal, winding down, Tony duly arrived having got an Easyjet flight from
Stanstead to Malaga, and a transfer by coach to Gibraltar.

The next day (13th) Martin and Tony flew to Jerez to refuel and then fly to
Tangier and Gibraltar again, so that Tony could get Tangier and Gib in his logbook.
I took it easy that day in Gibraltar, and filmed their return to Gib. Then in
the late afternoon I took the Monarch flight back to Luton. The two other lads
spent the next three days flying back to the UK, but that’s another story.

With a minimum of planning, this series of flights were carried out in VFR
conditions. It was thoroughly enjoyable and we all want to do it again. Nuthampstead
to Le Touquet won’t be quite enough.

G-BUYS parked on the ramp with Eddy’s Monarch flight taxying out: