Last year, my maintenance guys asked me if I’d be willing to ferry a Cessna 172 from England to Romania. I certainly wasn’t one to refuse such an offer, and we provisionally scheduled the flight for the end of January, weather permitting. January come and gone, the weather was anything but. Watching the big cyclone make rounds over the British Isles, generously watering the country and shedding cold fronts with enviable regularity, I grew a bit restless and, finally, spotting a tentative small break in the nature’s antics, rushed to take an early morning passenger flight to London. As we were crossing the Channel from Belgium to England, I was watching the cloud tops that seemed to be around FL100 and looked quite peaceful. Weather on the ground in Heathrow was grey but nothing out of ordinary, either. However, a couple of hours and 100 km made a lot of difference – as Tom and William were driving me to the airfield, the wind started to rise. Getting out of the car, we felt the first drops fall. An hour later, it was raining cats and dogs and a howling wind blew right across the runway. All we managed to do that day was do some basic checks, run up the engine, taxi to the pump to fill the tanks and back, get thoroughly wet, and go stuff ourselves with a hearty Indian dinner.

The next morning, wind turned along the runway, the grey morning clouds soon gave way to a blue sky, and Tom and I flew a few circuits and a short errand to a nearby airfield for Tom to pick up another aeroplane for maintenance. The Cessna behaved well, the O-300 engine with a freshly replaced cylinder ran fine, fuel consumption was exactly up to spec, and everything looked jolly good. We replenished the tanks, loaded the stuff that was supposed to go, tied the plane down and left for the night.

Early morning met us with rain and low clouds. The airfield being VFR only, I was to depart visually and didn’t want to dive into the grey sh*t right away, but at least I got some extra time to prepare before the flight while waiting for the rain to end and the bottom layer of clouds to clear. Anyway, I still managed to take off before the planned cut-off time to get to Prague before sunset. In principle, this wasn’t so terribly important, but the Vodochody airport was closed and I would rather avoid the hassle of landing at Ruzyne (the main airport) and land instead at Bubovice, my well-familiar home base.

The lower airspace was fairly empty, so I picked up an IFR clearance very quickly. I merrily climbed to FL110 but still remained in solid IMC. Only near the Channel did I finally come out of the clouds only to enter them again a few minutes into the French coast. Somewhere near Lille, when the milky white nothing in the windshield erupted with drops of water, I didn’t find it alarming at first. A few seconds later, however, I realised the droplets weren’t moving. The frigging cyclone managed to hit me with one of its sleeves. Pointing the nose down, I announced the Lille controller I was taking an emergency descent out of icing. FL90… no change. FL80… no change. Finally, at FL60 the icy drops started to slide little by little. The leading edge of the wing root visible in the corner of Cessna’s windshield showed a layer of ice. The airspeed dropped, and even opening the throttle fully didn’t help much. Meanwhile, I was handed over to Brussels, which started guiding me for the arrival at Charleroi. A few more minutes passed, and I realised the aircraft wasn’t staying in level flight even with the throttle wide open. The ATC let me down to the minimum of 4500 ft, vectoring me for the ILS from far away, like they usually do in Belgium. I couldn’t quite maintain 4500 but, fortunately, by that time I was more or less in VMC – glancing down, I saw the ground, small shreds of clouds, and something that looked like showers of snow. Judging by the lack of white patches on the ground, they seemed to melt while still in the air, and the Charleroi ATIS also reported patches of water on runway. Oh yes, I also noticed a thick crust of clear ice on my wheels. I was flying against a strong gusty wind, the ground speed on my GPS occasionally dropping as low as 16 knots. To save time and distance, I requested a visual approach by direct track. The controller asked me if I wanted to declare emergency. An unknown part of me responded: “Not yet”. Suddenly, the aircraft started to sway violently for several seconds. I didn’t understand what was happening and kept trying to maintain altitude. When the same thing happened again in a minute or so, it suddenly dawned on me that not only was my aerodynamics spoiled by the ice, but the stall warner was also frozen solid and, being concentrated on the altimeter, I stopped paying attention to the airspeed. The plane entered a falling leaf stall, making a few oscillations with an amplitude of about 60° around the vertical axis, then eventually dropping the nose and resuming a straight flight. I held the nose down, sacrificing another 1500 feet but picking up the speed I was direly lacking. The situation improved considerably, I was even able to start clawing my way up little by little without losing speed. Finally, I saw the runway. In the meantime, I heard the ATC send a Ryanair flight into a holding pattern, adding: “We have an emergency in progress”. Conversely, by that time I was already certain of making it to the runway. As I was on final, the Ryanair pilot reappeared on the frequency, asking the controller how much longer he was to hold, because he had minimum fuel and would rather divert to Lille than get stuck holding. The controller sternly replied: “Stand by, we have an emergency in progress, I’ll talk to you later”. Being almost over the threshold, I was happy to chime in: “Ryanair, don’t worry, I am landing in five seconds”, and heard back the wishes of luck while already in the flare. I quickly vacated the runway and rolled on the apron to the GA parking area. As the Cessna came to a full stop, I heard the wail of reverse thrust being engaged and saw the Ryanair’s 737 coast down the runway, splashing big fountains of water behind the wheels. The ground controller told me an inspection group would come in a moment. A yellow car appeared soon but whizzed past me towards the touchdown zone. A few minutes later they returned to me, bringing two chunks of clear ice. Having ascertained everything was OK with the aircraft, they took photos of aircraft papers so I wouldn’t have to come to the reporting office at the opposite end of the airport, and left. While we were talking, more chunks of ice falling off the wings kept plopping on the tarmac from time to time.

The whole flight took almost four hours instead of two and half. I would hardly manage to make it to Prague before sunset, I couldn’t be sure there was no ice somewhere in the cavities – for instance, in the ill-fated stall warner, and all my body really wanted was to fall down and get some sleep. I gathered my belongings, locked the plane and went to a hotel. 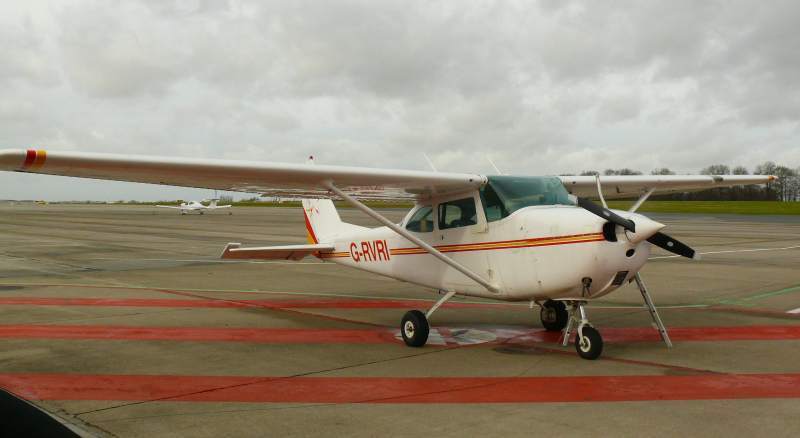 In the morning I spent a good hour trying to build a decent IFR routing to Prague. A forecast showed icing at FL100 and above along a significant part of the route but a clear air below, so I finally just dropped the idea about an IFR flight and decided to file VFR and go low. At first I stayed around 4500 feet over innocuous scattered clouds, but then they started to rise and pushed me up to FL55, then FL75. Finally, shortly before the Frankfurt control area, I saw a wall of clouds ahead and had to call for an IFR clearance. Apparently, a warm front that was due to dissipate was still there. Given a choice of IFR flight levels, I went up to FL80 without giving it too much thought, and was soon punished for that – near Coburg I hit icing again! It wasn’t so intense, though, and now of the rime variety. I probably responded quicker, too. A descent to FL60 quickly melted the ice away. Some 10 minutes later the ATC had to push me back up to FL70, but I was already in VMC between two layers. A few more minutes in Germany, then a few minutes in the Karlovy Vary TMA descending to 4800, and suddenly, as if going through a door into summer, I popped into a clear blue sky with soft tender cumuli far away on the horizon merely for decoration. On my third attempt to call Bubovice someone finally responded, probably on a portable radio, telling me the FISO had just left and there was no traffic. Seeing the runway from afar, I landed straight-in and parked in front of my hangar. The flight took 3 hours 40 minutes.

The plane owner assured me there was no hurry, so I just decided to wait for a good weather. Unlike England, it was not to be an eternal wait for the unknown. Three days later, the fronts over Hungary and Romania disappeared, and I was ready to fly on.

First I took a 15-minute hop to Pribram to fill up, as Bubovice only has fuel available on weekends. The segment to Romania was the longest one, so the tanks had to be filled to the brim. The flight to Arad was a typical “summer” IFR: from as low as FL70, I just saw soft cottony clouds all the way to the horizon, with the eastern end of the Alps protruding above them far away. 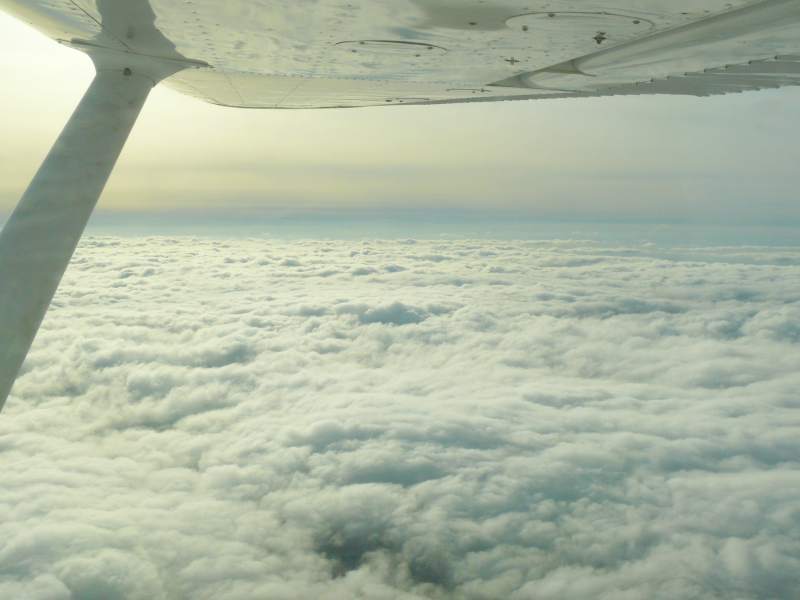 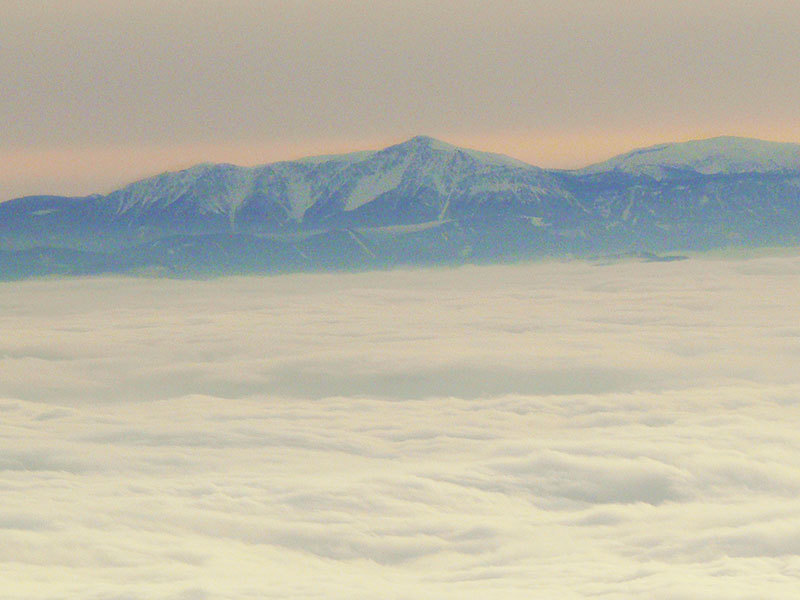 As chatty was the airspace over Austria, just as silent it went once I crossed into Hungary: over almost two hours of flight, only twice have I heard a brief radio exchange in Hungarian. Somewhere in the middle I even suspected I lost communication, and had to call for a radio check. The last hour of the flight was in the darkness. Romania met me with a cloudless sky and a bright “Christmas tree” of lights at Arad. 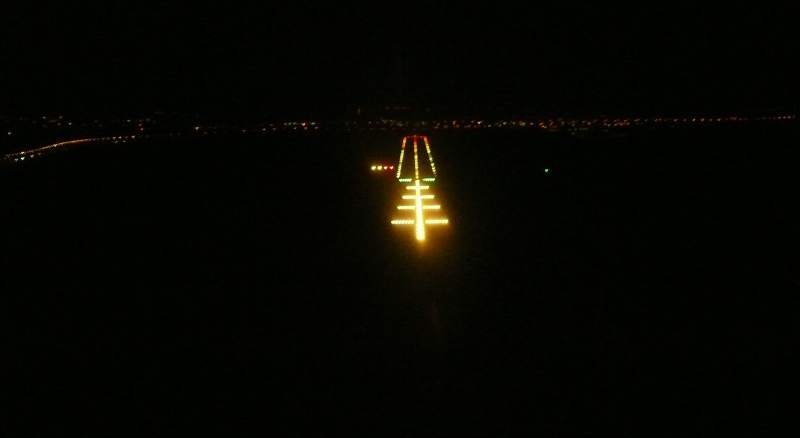 This was the end of the mission, Liam got his aircraft, and I got a train ticket and left for Budapest and then Prague. Total flight time was 12 hours.

Lessons learned:
1. Brakes don’t work well on wet grass. Sometimes not at all.
2. Before accepting an aircraft for a ferry flight, thoroughly check out its behaviour at different points of the flight envelope.
3. Losing speed in icing is a lot more dangerous than just icing or just losing speed.
4. Be especially wary of icing when the air below isn’t warm enough to melt it. When flying IFR in winter, don’t try to get as high as you can.
5. UK MetOffice’s synoptic charts tend to be optimistic. The farther ahead, the more. Gramet isn’t quite so accurate, either.
6. If you don’t sleep well before the flight, your attention span decreases.