To the end of the world and back - the whole story

A Mooney 252 is a capable aircraft. In fact, ours took us from Mannheim, Germany to South America and back. This is a write-up of our trip. It‘s mainly about the flying, but there are also a lot of pictures about our touristic activities. It starts with a little introduction describing the planning phase, contains links to the reports on the individual regions and ends with a short conclusion.

Why Mrs. terbang and I flew to the end of the world

The story started beginning of 2011. We were sitting over a beer in a sidewalk café in Mendoza, Argentina, when we decided that we would buy an aircraft. At that time I was holding a CPL/IR with about 500 hours under the belt and Mrs. terbang was a freshly minted private pilot. Earlier on this trip we flew out of La Paz commercially and thought what a dream it would be to land there.

Once we were back in Europe we started to investigate the purchase in earnest. From the beginning it was clear that the purpose of the aircraft would be to fly across the Atlantic one day. In June 2012 we bought a Mooney 252 that we had found after quite some woe with deals that wouldn’t materialize. The Atlantic crossing came much sooner than we had expected, in 2014 (see the little report on our Oshkosh visit).

We returned from America in October 2014 and were satisfied for a while and focused on other things, e.g. the new panel. As it always is, after a few months we started thinking about what we could do next. After a while it became clear that we might be able to take a leave again in 2017/2018. We had been to South America many times before and considering where we had decided to buy an airplane, it was obvious that this would be a tempting destination.

The idea was a hot topic in our table talk over dinner each night. One evening I sat down in front of my Mac and started to play around with skyvector. I googled airports and found that AC-U-KWIK has public info about ports of entry and fuel availability. After a few hours I had found a feasible route that could bring us to Ushuaia (SAWH), and back again. Ushuaia is a town in the very south of Argentina which deems itself el fin del mundo, the end of the world. I copied the link and sent it to Mrs. terbang. She was determined to tackle it from the first moment. 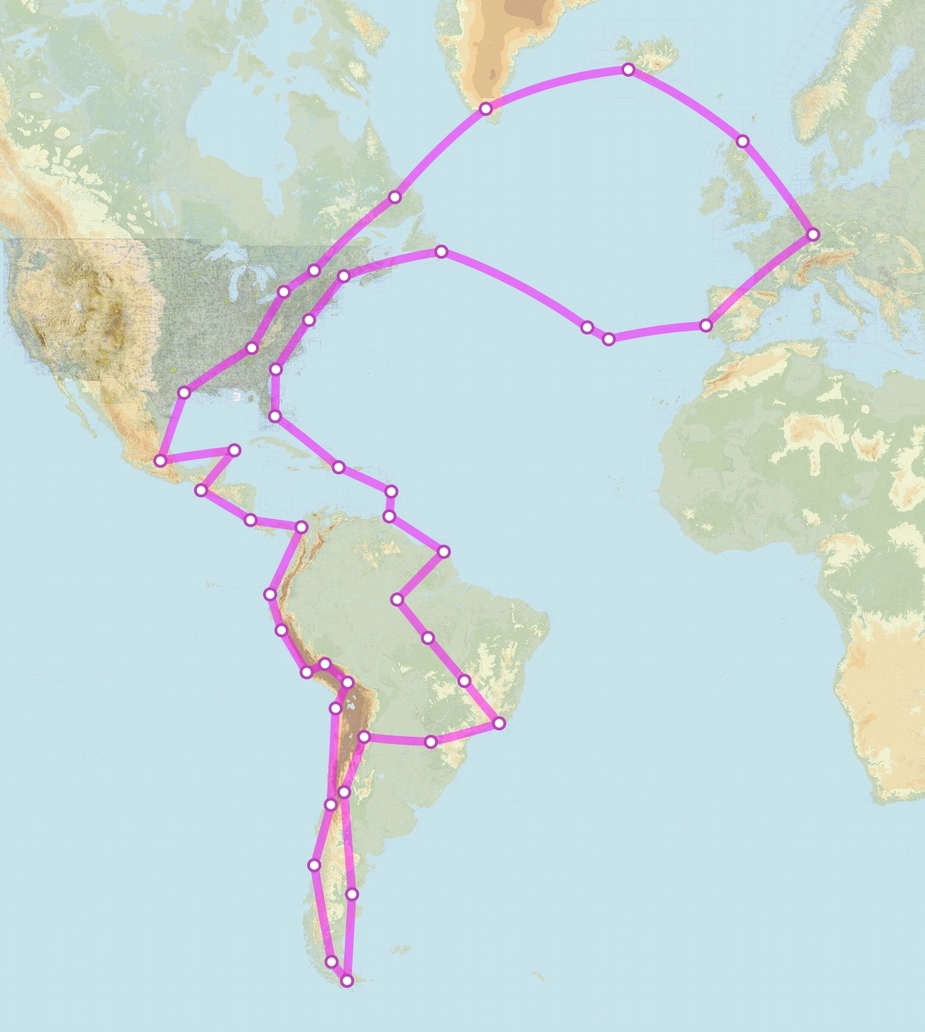 I was a little hesitant, thinking about all the problems that might come up on such a trip. Anyway, she convinced me that we had the chance and it would be stupid not to go for it. We were sitting in a local pub in November 2016 and formally decided to kick off the project. From the beginning it was the idea to skip the European winter 17/18.

We created a shared dropbox directory that would hold all the project data. A text file was used as project backlog. Management wasn’t that difficult as the project team had only two members but anyway, we dynamically added backlog items, one of us would take them and set the state to done when appropriate.

There was a lot to do. E.g. Mrs. terbang contacted the embassy of each country on the route (except the ones we had been to before), to find out if we needed a visa to get there (it turned out we did not). We downloaded all the relevant AIPs available. I looked at climate charts and found out that my first idea to fly down via Mexico and the west coast and back via Brazil and the Caribbean was stupid. To do it the other way round was much better.

Mrs. terbang listened to South American LiveATC each evening and I talked to our A&P during the usual owner-assisted annual. For a while we considered to outsource getting the permits but we decided to do it ourselves. In Europe we use Autorouter for planning and Skydemon as charting app, none of which work in South America.

We went to AERO to get in touch with RocketRoute. The experience at their booth was less than stellar and we didn’t buy anything. However, later we subscribed to their worldwide program and got in touch with one guy whose help proved to be invaluable in Brazil (see the Brazil part).

Charting apps for the region proved to be scarce. In fact, Jeppesen MobileFD appears to be the only one available. Luckily the cost for South and Central America including the Caribbean was not outrageous. It comes with the enroute document which contains condensed information from the AIPs of the region. This was very handy for countries where there is no AIP online (Bolivia, Peru and Mexico for example).

We studied the entry and overfly procedures for all the relevant countries. Looking at the route, we found that the only permit-wise difficult countries on the way south would be Venezuela and Bolivia. All the others till Chile had straight forward rules we could comply with. We decided to prepare for these two beforehand and do the ones after Chile while on the way. The Bolivian authority was responsive to email, friendly and clear, while Venezuela was much harder.

By June we had collected all information available in our dropbox directory and planned the route in a little more detail. We identified the critical stops, in terms of availability of customs and Avgas. We got in touch with these airports to make sure we could fly the planned route. We didn’t do this where there were alternatives. For Argentina, Chile and Mexico as well as for the countries we had been to before, we didn’t do any detailed planning. The only exception to this was Ushuaia, of course.

There was a lot to prepare besides the flight planning, of course and we really had a few busy months. Beginning of August we took the plane to the shop for the annual inspection. We sacrificed three months as we would habe been due in November, but we wanted to have the aircraft thoroughly checked. We did it “owner assisted”, as always. Everything went well till we peeked into cylinder #6. I didn’t like how the exhaust valve looked. My A&P wasn’t overly concerned and in a different situation I would have just monitored it closely but not before we set off to this kind of trip. We decided that we wanted to have the cylinder pulled and replaced. We didn’t feel like crossing the Atlantic with an all new cylinder, so we flew around southern Germany for ten hours and then changed the oil again. By mid August everything was done and we were ready to go. We left Mannheim on August 26th 2017 and landed there again March 16th 2018. 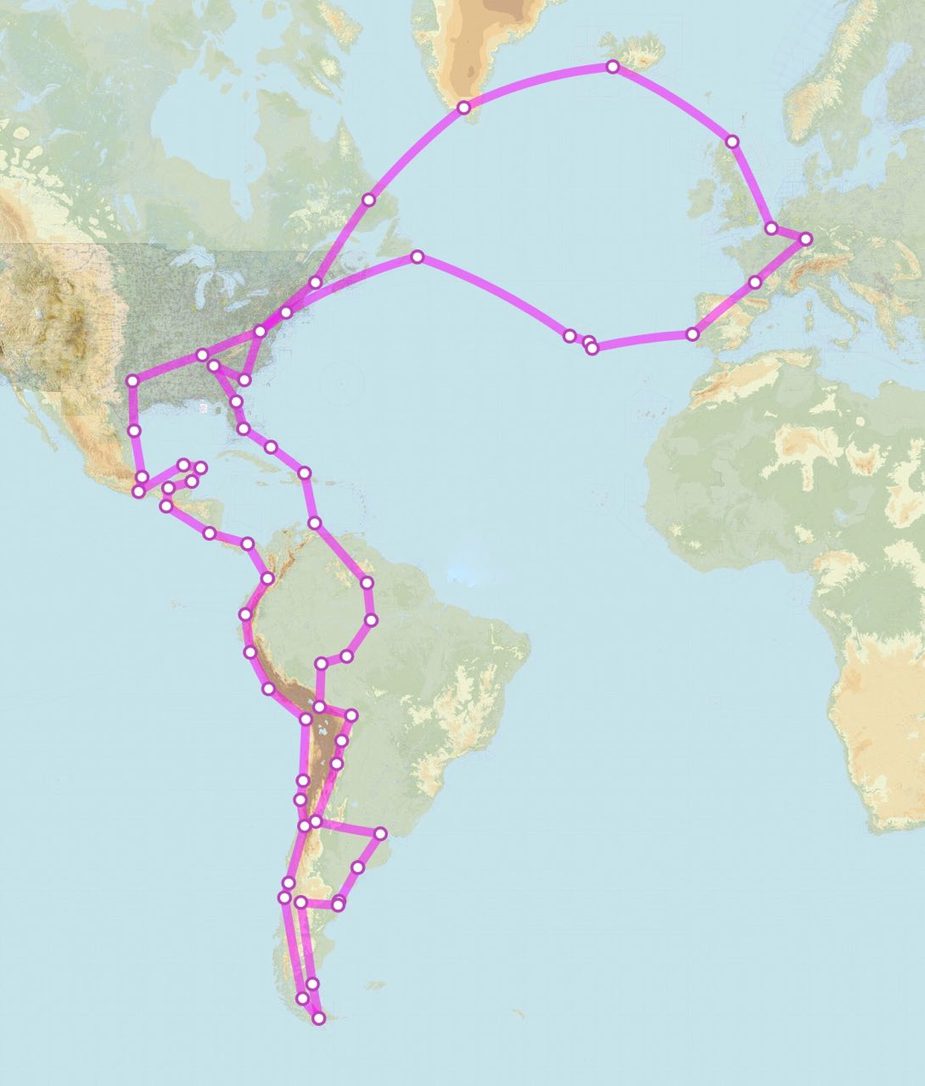 The route we actually flew

Looking back, we obviously were really lucky. We had absolutely no problem with the aircraft. After completing 24252 NM (airport to airport) in 168 airborne hours, this is a very good record, I believe.

BTW, even the oil pressure event over Chile is solved, we believe. We’re quite sure, that the root cause was congealed oil in the oil cooler. I had opened the cowl flaps and didn’t climb (enough) in the beginning, what made the oil way too thick. As the oil pressure is measured after the cooler, it read low because the flow through the cooler was obstructed.

We landed at 62 airports in 20 countries (twelve of which were new to us) and overflew quite a few more. The effort for the permissions was considerable but didn’t come as a surprise. Some countries were harder than expected, others were easier. However, Spanish is absolutely necessary if you intend to apply for the permissions on your own. Spanish is also of huge advantage in dealing with ATC in many parts of South America. Portuguese would be a huge advantage in Brazil. Besides that, flying (IFR) in South America is not much different from the US or Europe.

Filing flight plans via RocketRoute doesn’t work in most of the counties we’ve been to. At least it doesn’t work like one is used to from Europe. In many countries it is expected that the flight plan is filed and signed in person at an ARO. RR doesn’t even bother to insert the necessary AFTN addresses. I tried to do so by hand in Ecuador, just to see what happens. When we called AIS, they told us that the flight plan was filed from the USA and this wasn’t possible. Obviously this would be hard to solve for RR, but considering that some countries like Chile or Brazil work, a list from RR, detailing the procedure for each country would be nice.

All in all we were rather lucky with the weather. We were flexible and postponed or brought forward our flights a day when necessary. However, this was never more than one day while we were in South America. We were hit hard by weather delays on our way south in the US (by all the Hurricanes) and again on the way home in Newfoundland and the Azores.

Flying is expensive, of course, but costs for the flying weren’t that high. There were a few expensive airports, but not even a handful, most the others were much cheaper than what we’re used to in Europe. Fuel was considerably cheaper than in Europe in most places. The fact that we had no maintenance besides the four oil changes helped with keeping costs reasonable. Needless to say, it was a huge adventure worth every cent.