@Antonio was very kind to invite me to join him for a day-trip to the French Pyrenees yesterday. A nice warm-up for the fly-in of next week to LESU and a good occasion to get to know his wonderful Cessna P210, including the comfort of a pressurized cabin.

He needed to revalidate his mountain rating. That involves flying to an altiport to do some landing and take-offs there, every 6 months. The plan was to do it at LFIP, Peyresourde, elevation just over 5.000 ft. And, assuming we would survive, go to some other place thereafter before heading home. 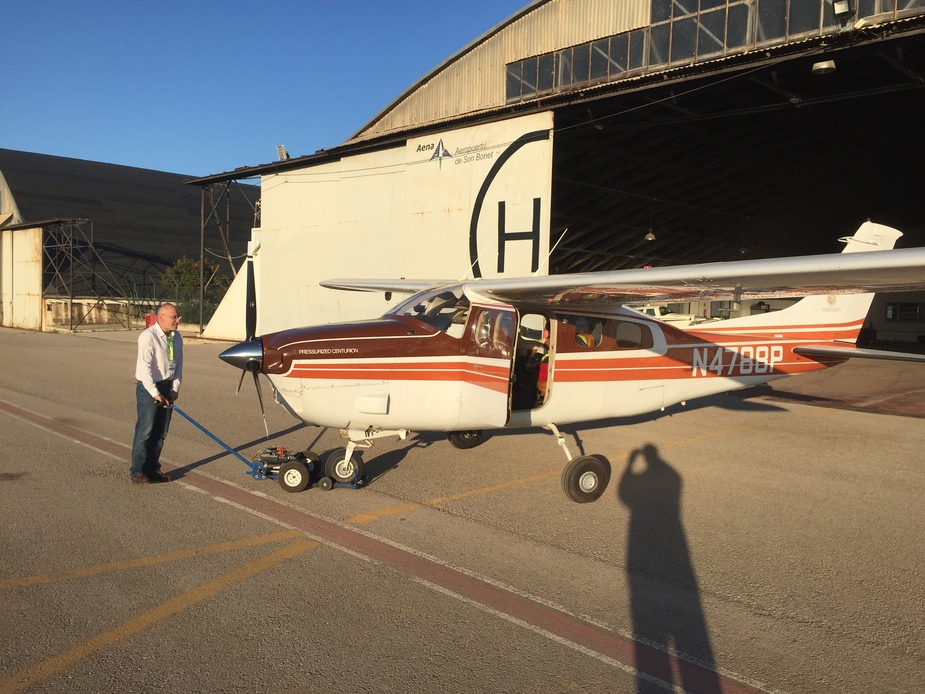 Leaving our island just after having picked up our IFR clearance, climbing to an initial FL100: 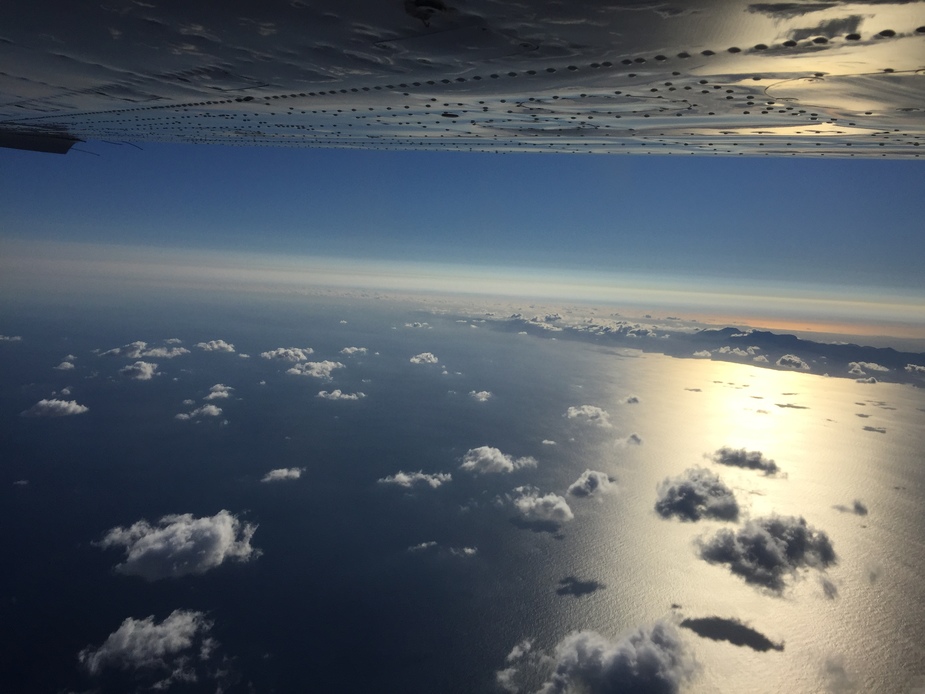 Eventually we climbed to FL120 to stay on top of the BKN/OVC clouds that covered the coastal area of the mainland. We did not elect to go higher, because the 15 knots headwind we had would only get worse.

A mature and trusted airframe, to which some sound modern avionics are fitted: 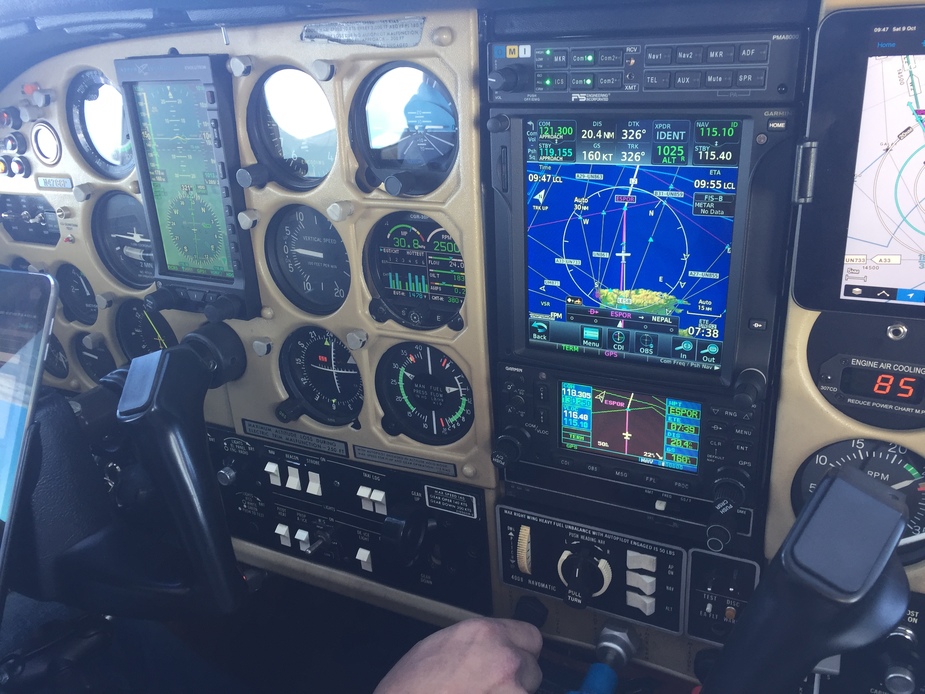 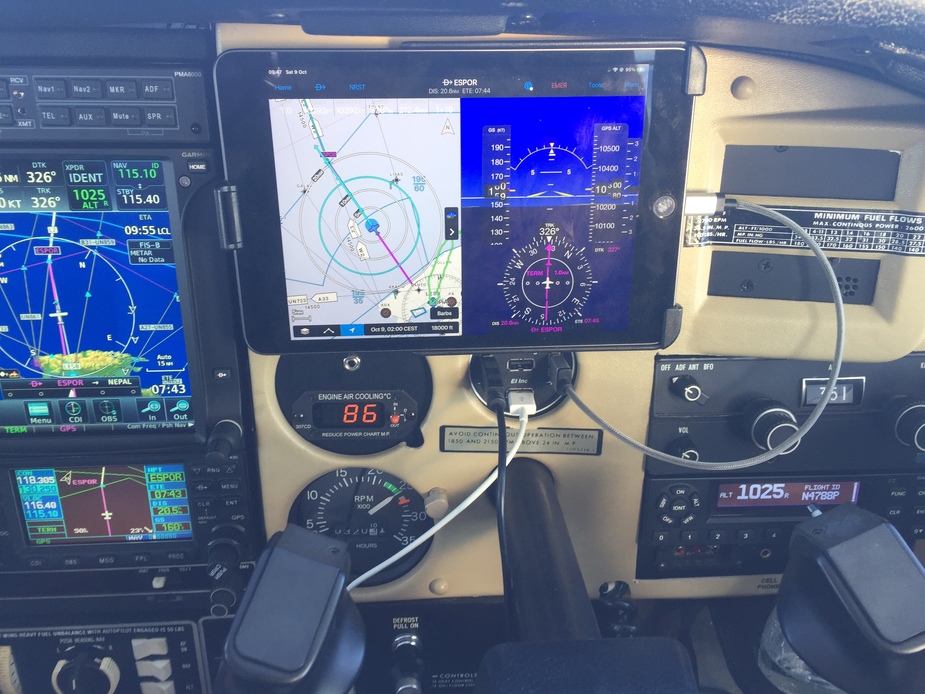 The aircraft flies well, and so did time, because we were approaching the Pyrenees in just over an hour. Here’s the valley that leads to LESU from the South, starting at that lake. Hard to see LESU, those that have been there may just see it: 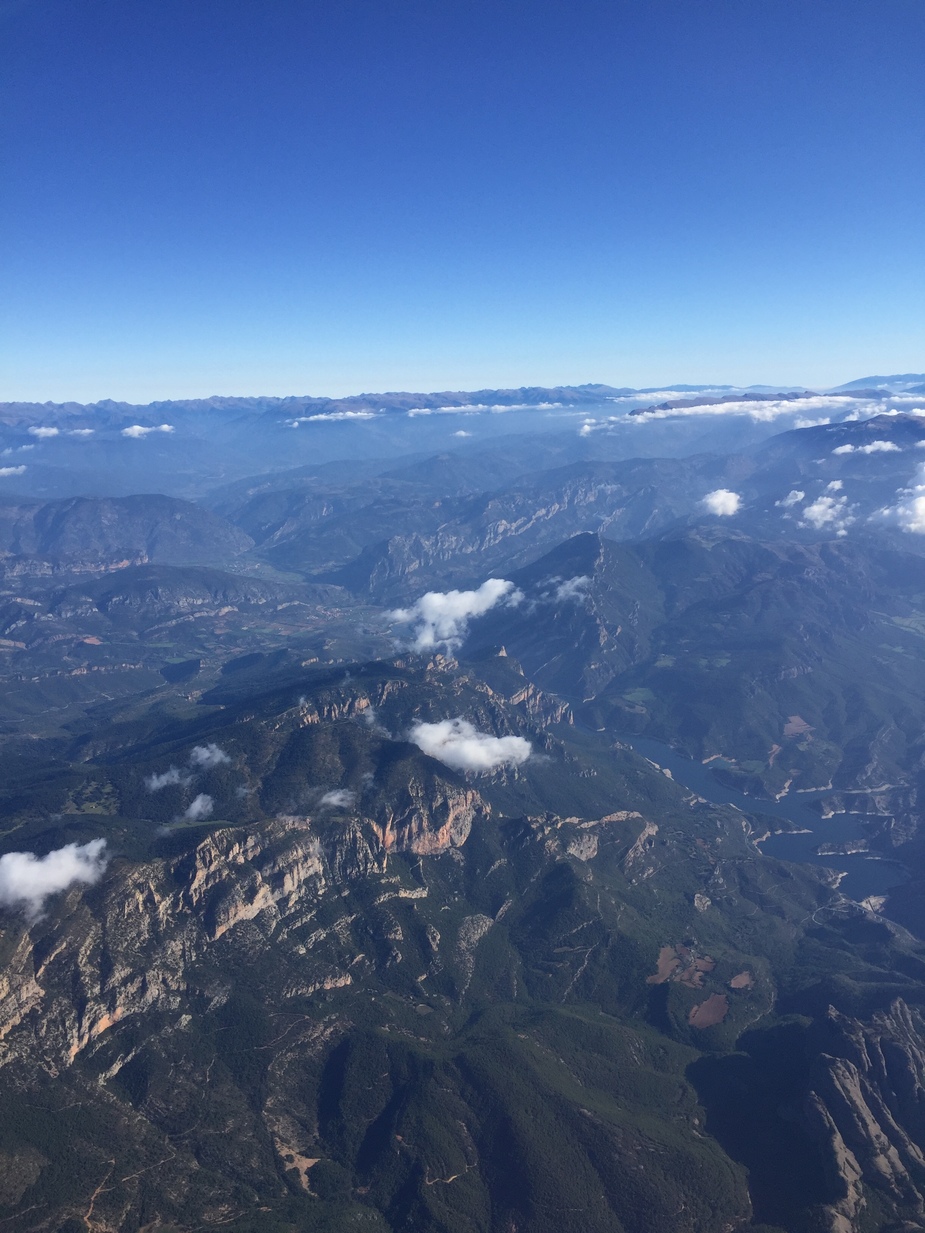 Routing North West through a valley that would take us to France, which would be the way to go to the middle of France from LESU. Crystal clear skies and hardly any wind, so no turbulence. Abiding by the principles of mountain flying we hugged one side of the valley so that we would have ample space to make a 180 in case needed, and we selected the side where there would most likely be an updraft, although there may have been none: 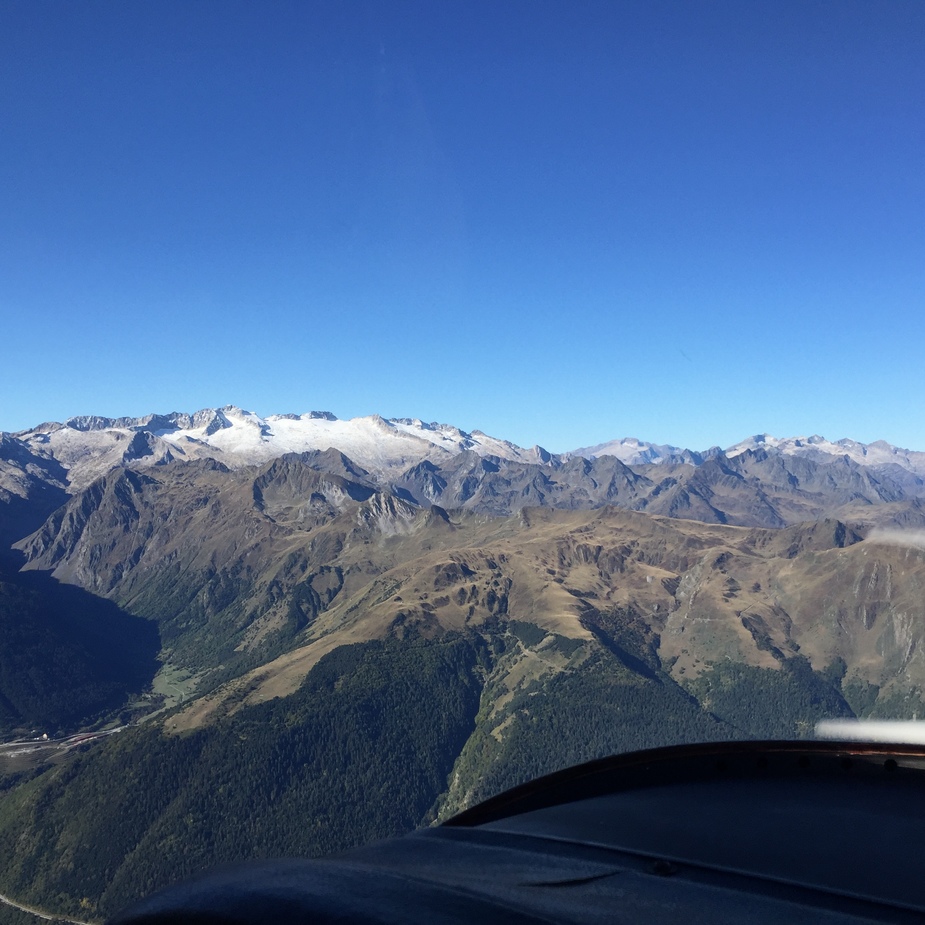 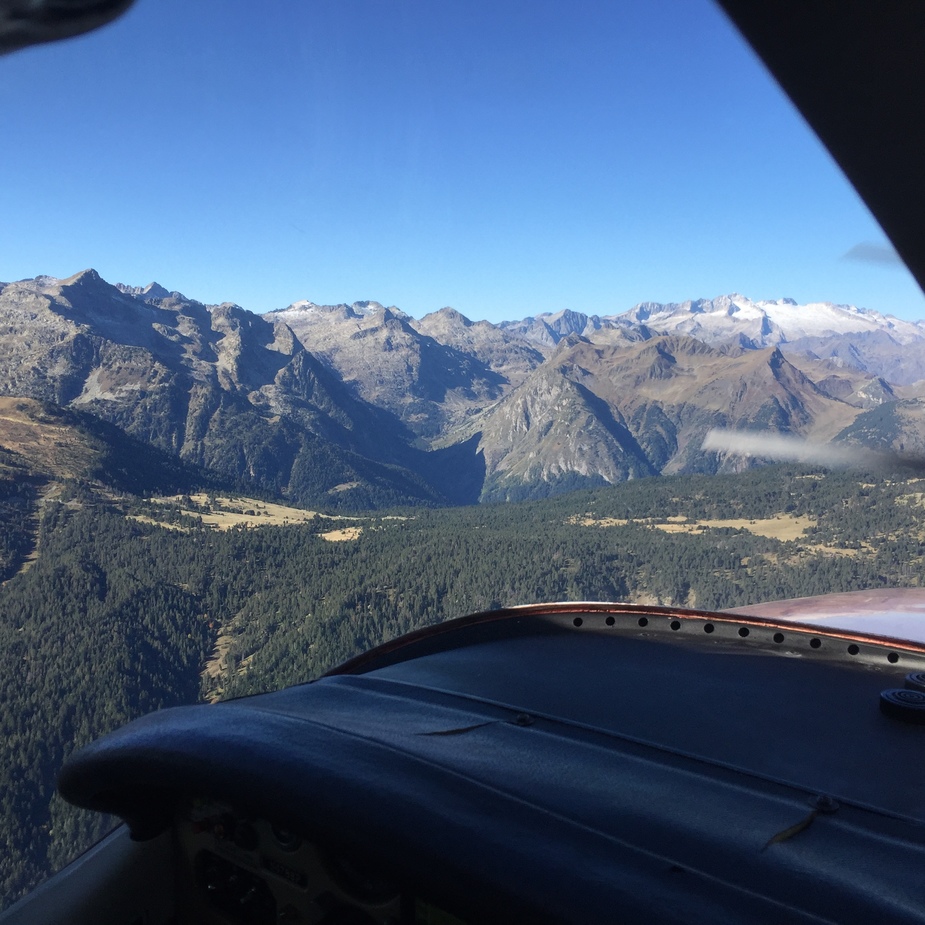 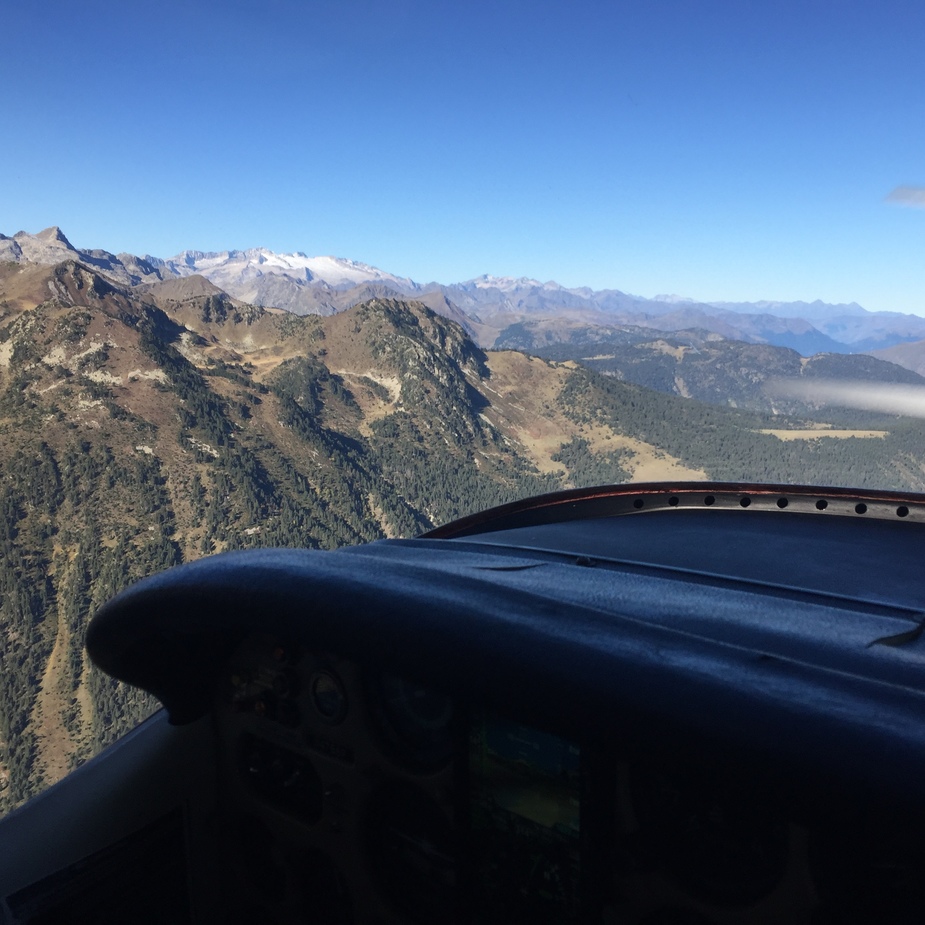 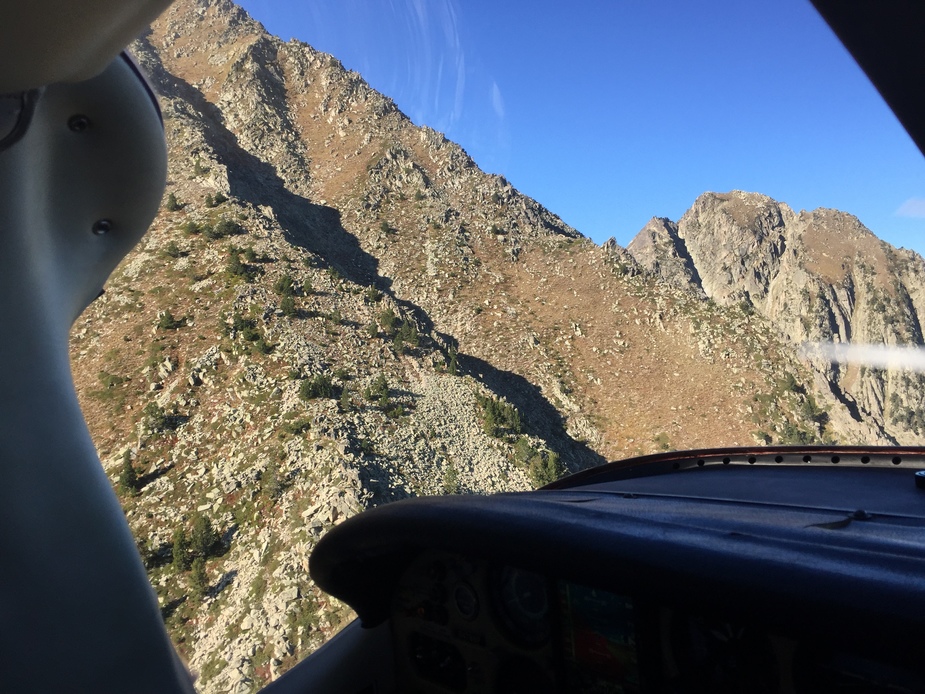 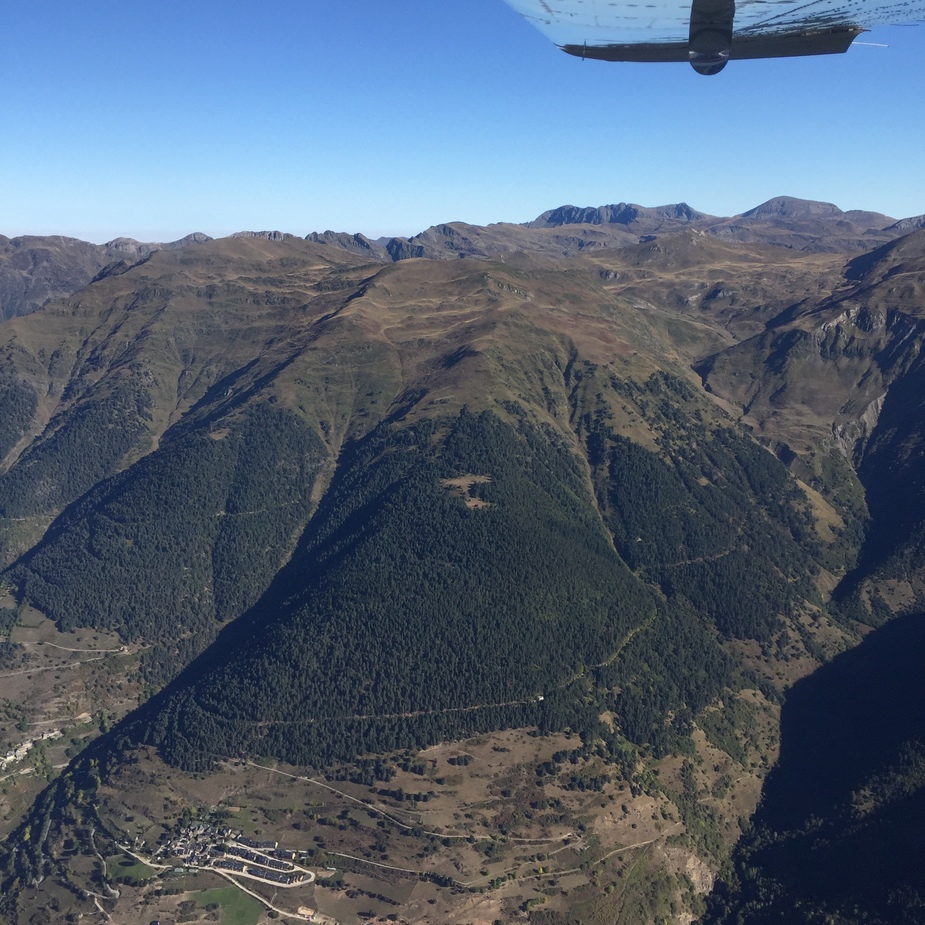 On the way to Peyresourde, the quite well-known field of Bagneres de Luchon came into view. I immediately realized that I would have to bribe Antonio into going there afterwards, but the bribe turned out to be quite unnecessary: 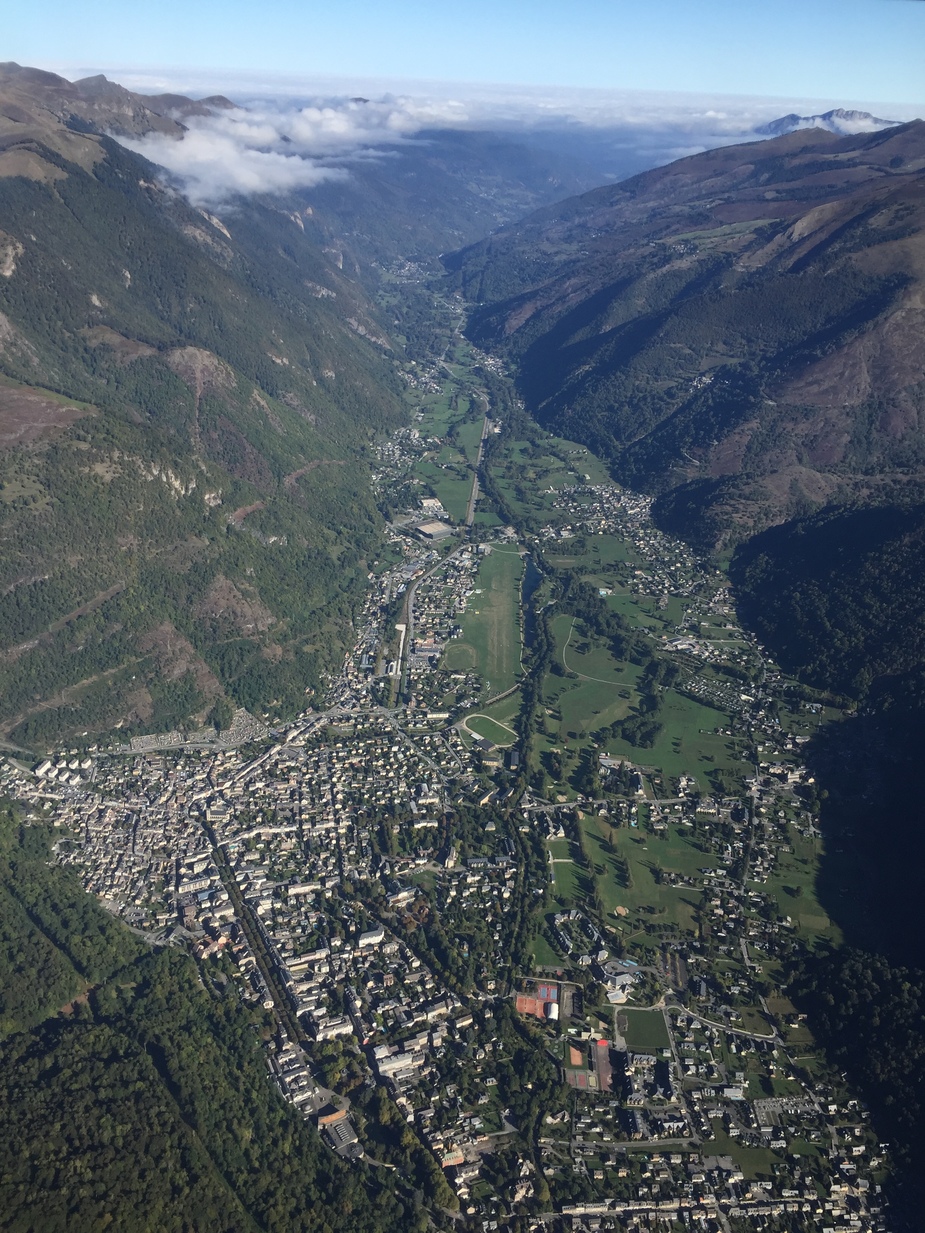 OK, time for Antonio to get concentrated. The drill is to first make a recon circuit over the field, to check the field conditions, while keeping a good lookout for hanggliders. A/A comms only. Everything looked fine, so in we went for a special approach, looking at a very short and up-sloping runway. Perfect landing and no brakes needed. To the contrary, throttle needed to make it up to the top. 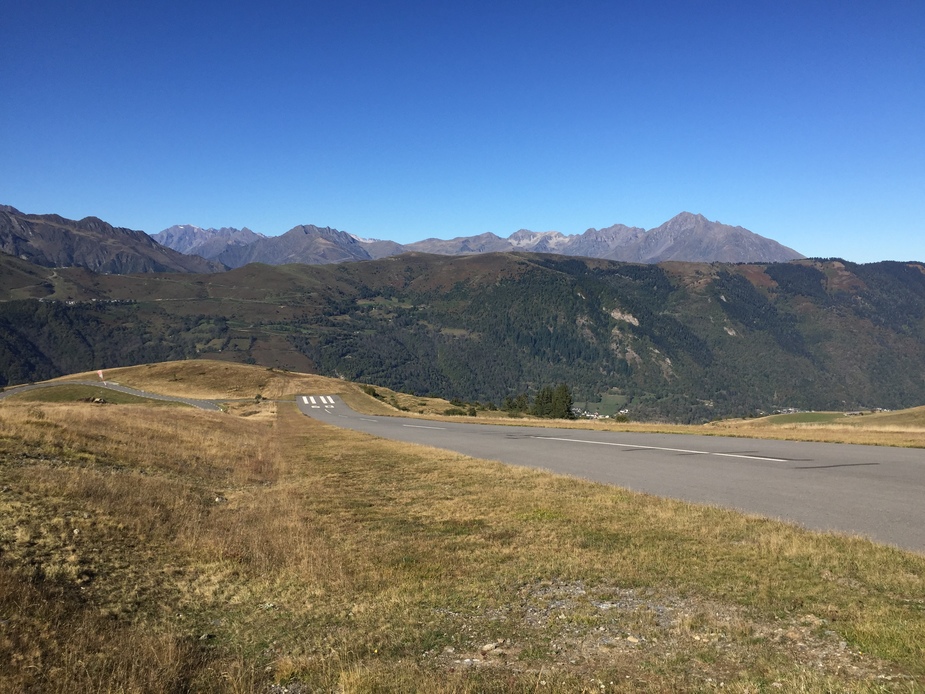 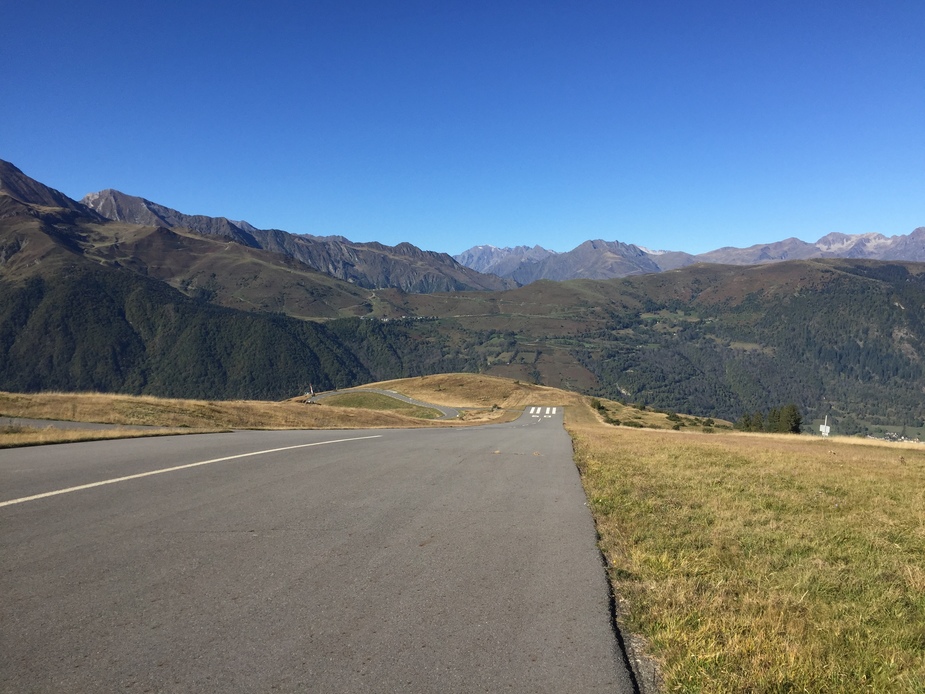 Antonio had to do a few circuits and would do these by himself. Here’s where a special tool that we carried was made to use. I have to admit that I was a little puzzled that he loaded up a broom at Son Bonet. I mean, if that would be meant to eject with and fly off in case of an engine failure he would certainly not have left me behind and take two, no? Well, the mystery was quickly solved. Off he went to the departure end of the runway to start clearing any small stones at the location of his full-power stationary start of the take-off run which is really what you want to do here.. 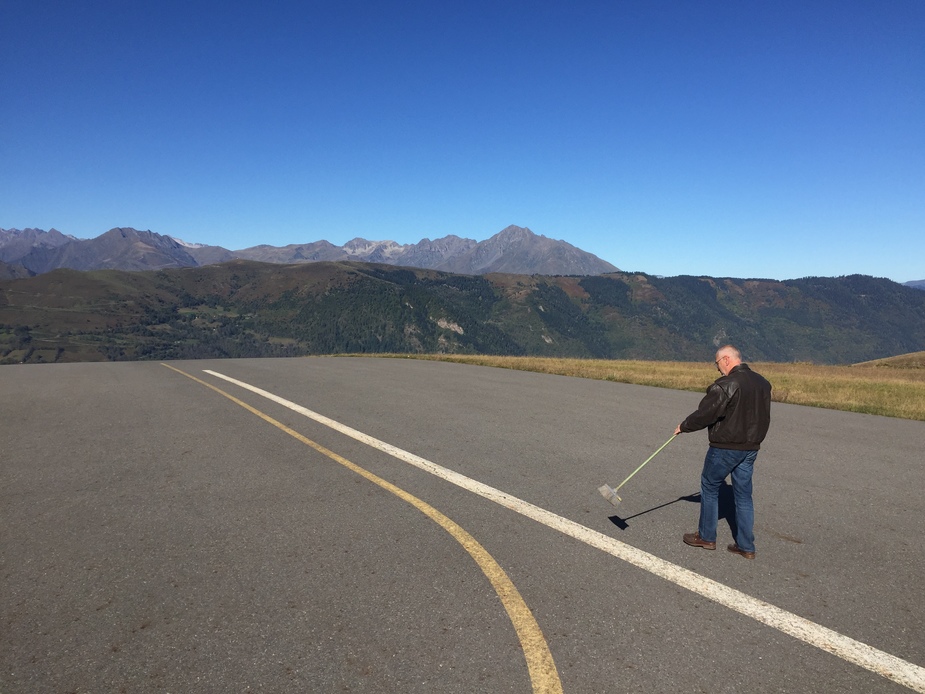 All relieved and happy about his newborn currency after a few circuits: 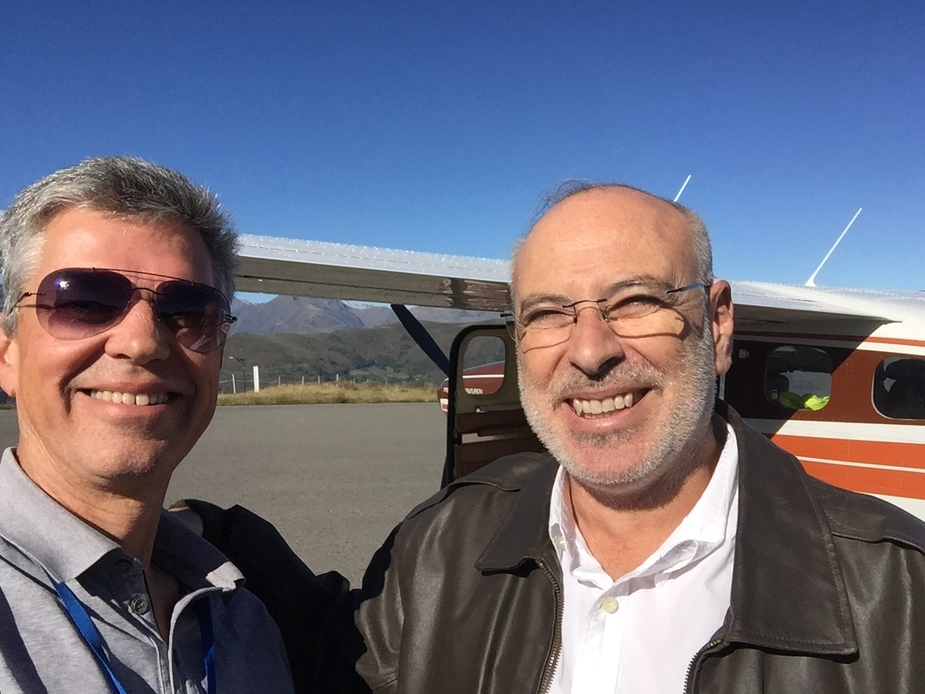 Always being short of bragging rights, I took this picture. In the end, wife was not impressed. 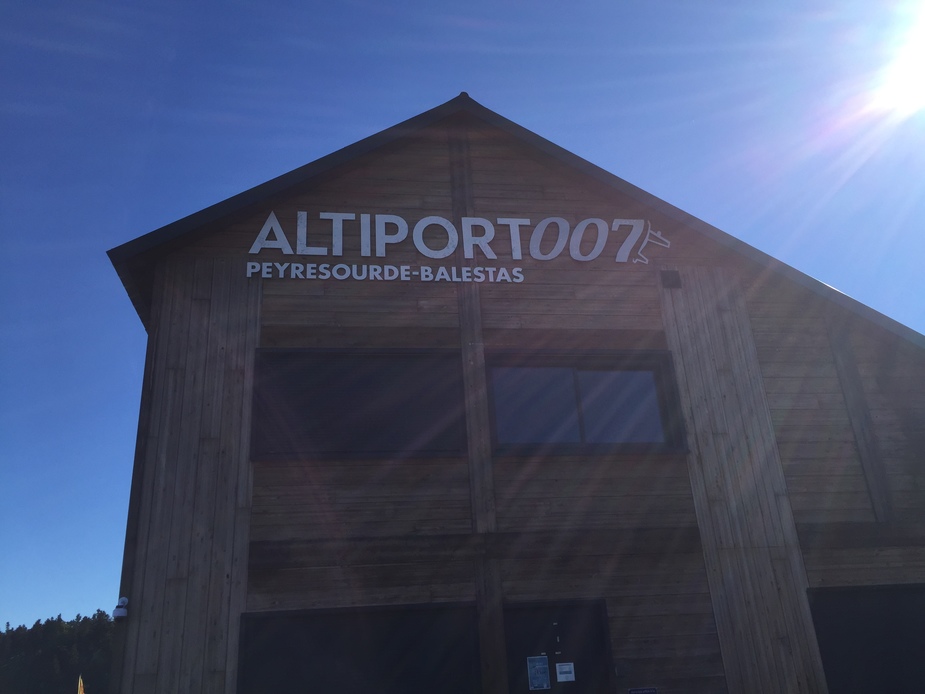 A quick bonjour and au revoir to Michel, the airport manager who lives in a mobile home on the field and off we were to Bagneres de Luchon LFCB, just 10 minutes away. 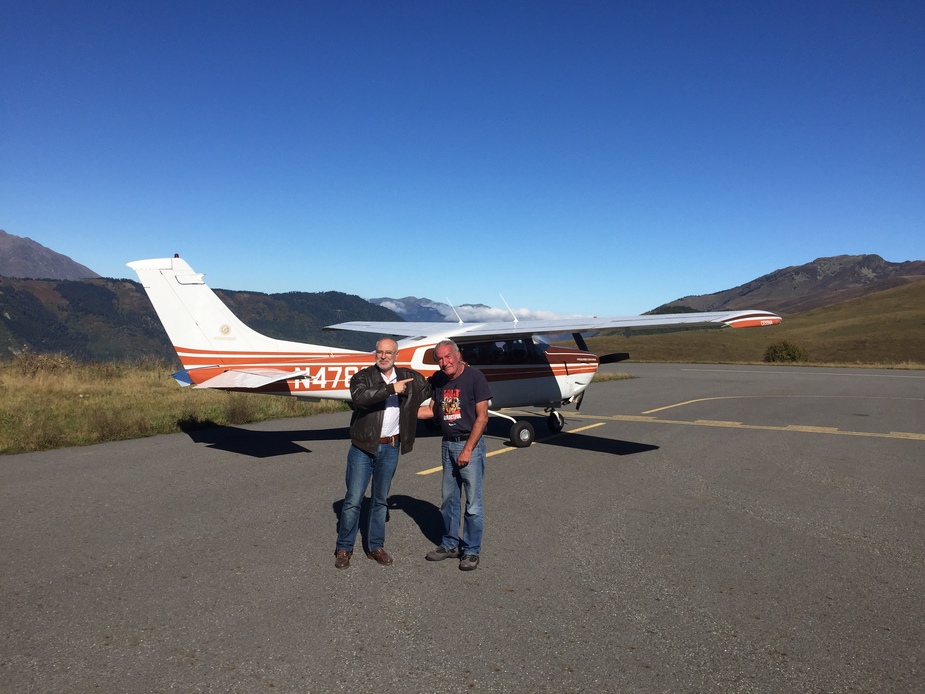 Wonderful field and quite challenging in a fast aircraft. It means you really need to hug the trees on downwind in order to get to a decent final leg. Intensive glider activity, plenty of funky machines around, just wonderful: 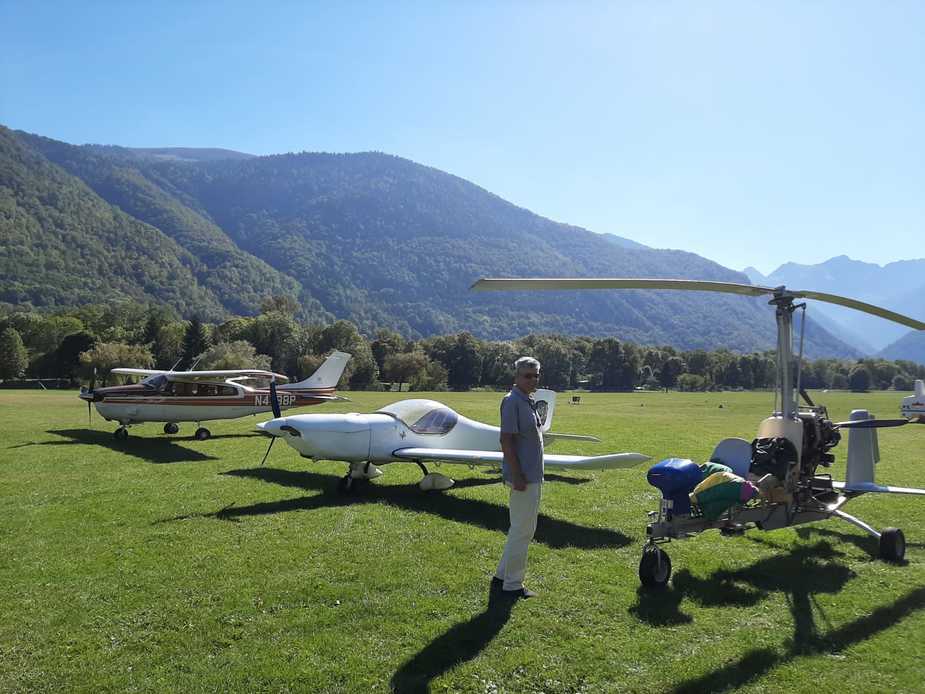 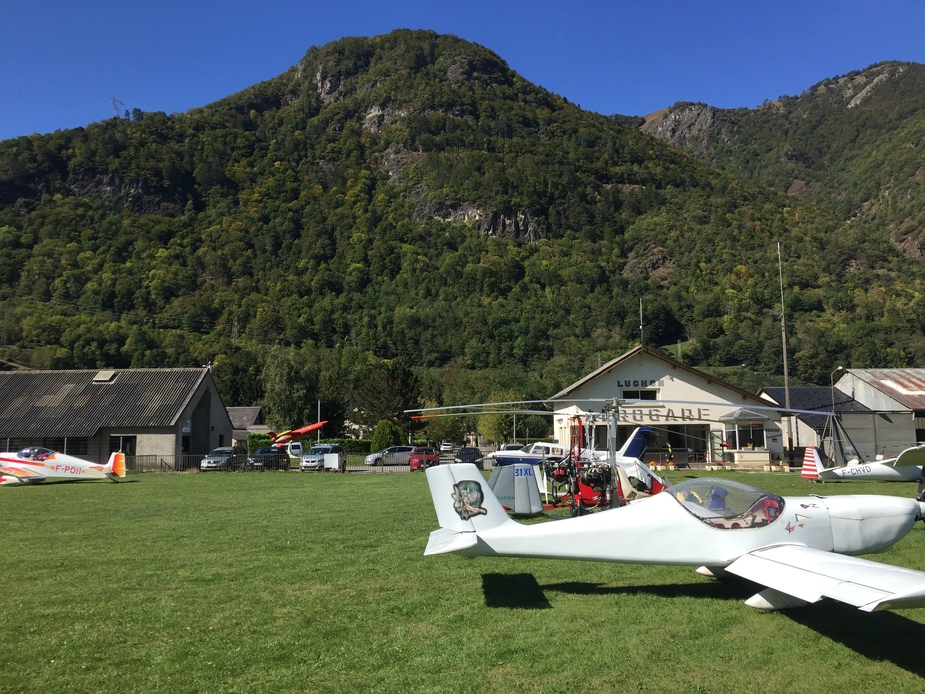 Time to go home to make it back for a late lunch. The P210 is a great climber, so we were up over the upper Pyrenees in just a couple of minutes: 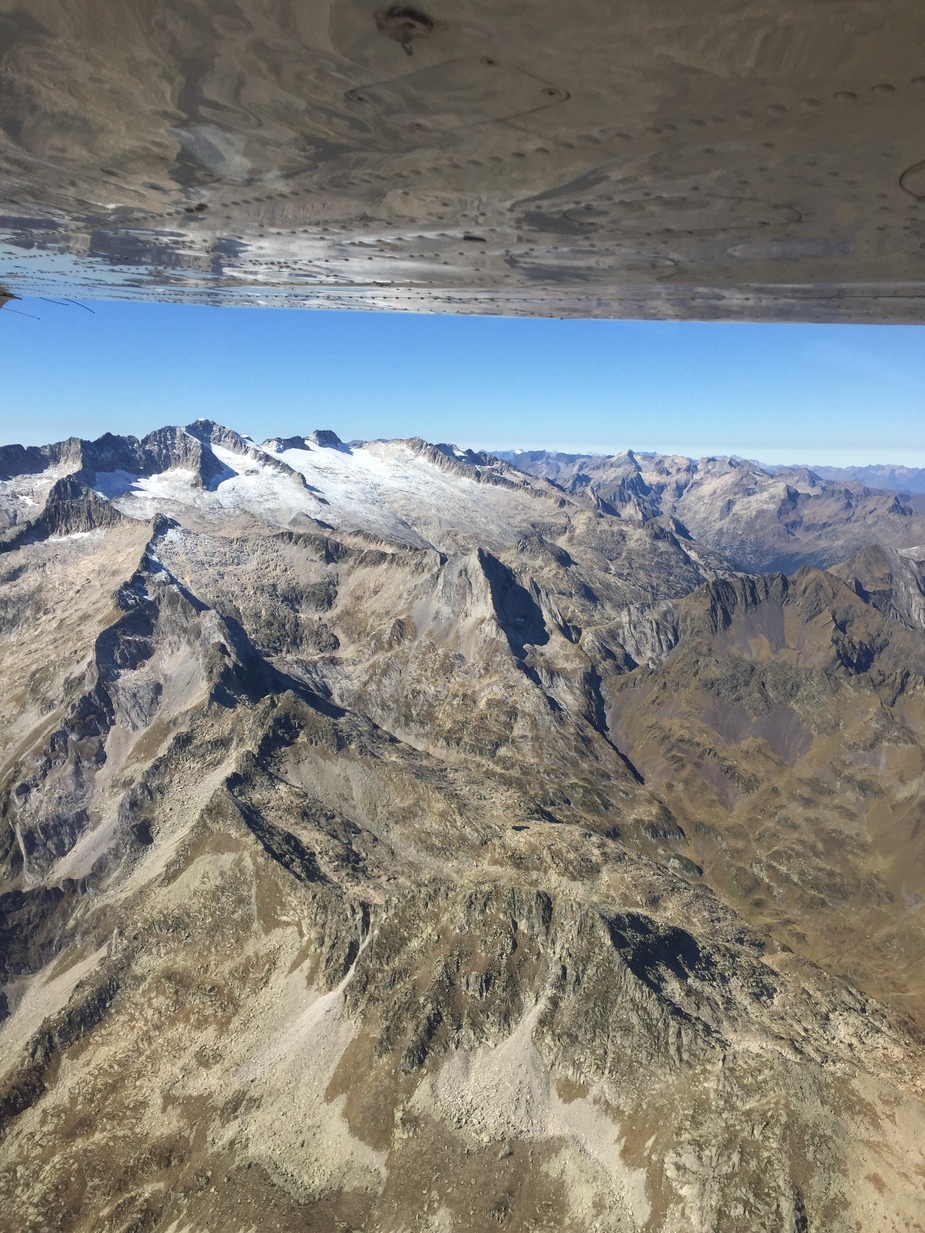 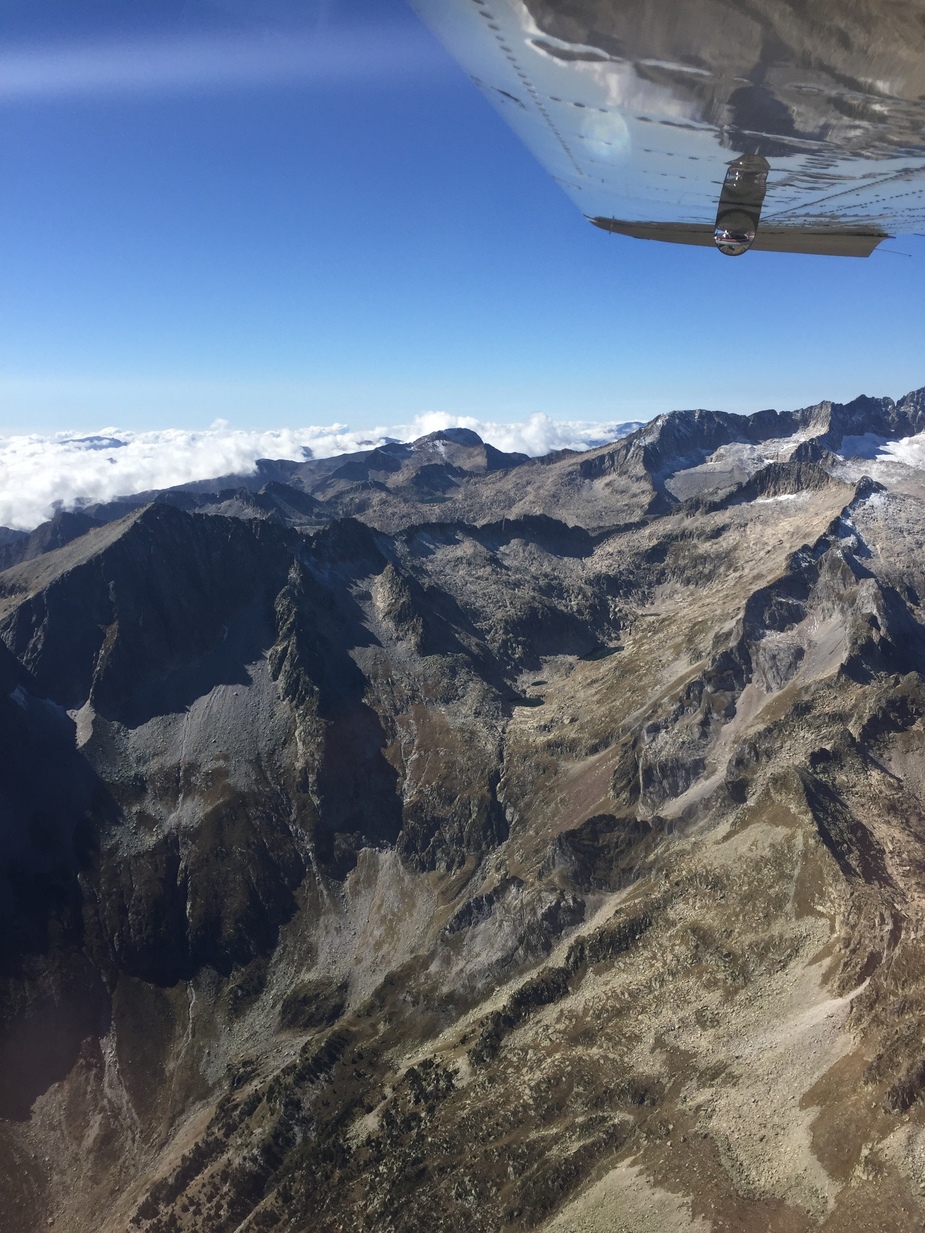 Elected to climb up to FL170, expecting some nice tailwind, but they did not materialize, so we had to live with a GS of ‘just’ 185 knots, which meant around one hour back to LESB. A familiar view of home, shortly after having crossed the Spanish coast: 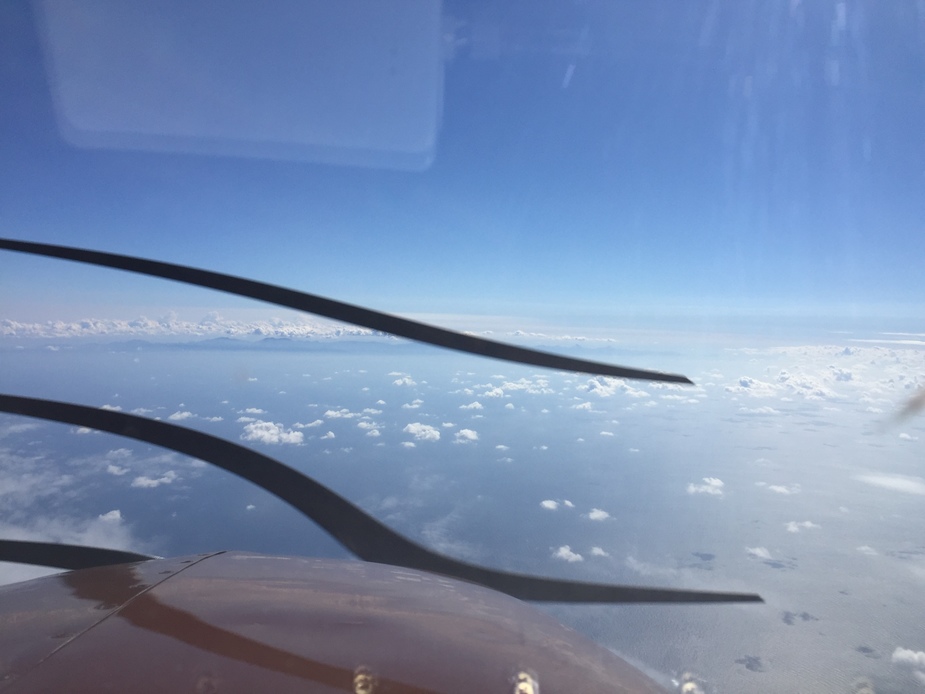 some beautiful shots and a nice report aart, thanks for the report. Just gives me the “I feel the need, the need to fly” sensation

Fantastic report and great photos! And gives me some things to think about…

Thank you, great report! The fly-in comes one week too soon!

Is that in the Cessna MEL? STC?

Is that in the Cessna MEL? STC?

Thank you @aart for coming on this flight and the nice report! I really enjoyed sharing the flight experience. It shows you really enjoy the relaxed atmosphere of small flying fields in your new aviation life vs the bureaucracy of the larger ones.


I mean, if that would be meant to eject with and fly off in case of an engine failure he would certainly not have left me behind and take two, no?

Please do not disclose all my wizardry tricks on an open forum!

More seriously, I recently had an expensive prop overhaul and belly strip, reseal and repaint, (2800 hrs of prop blast had done quite a few nicks on the paint). I keep them as well cared as possible! It is amazing what 300hp of air blast will do to loose gravel turning it into a myriad tiny projectiles, not to speak of what a little piece of gravel thrown against a 1000km/h aluminum blade tip at 2700 rpm does. It is amazing they survive such environment so well. One normally applies power smoothly during the take-off roll to avoid that, but no such luxury at LFIP’s 450 m-long, 5200ft-elev runway !


Is that in the Cessna MEL? STC?

only when flying to fields requiring static power take-offs , but perhaps it is a good idea to share @aart’s view on the broom with the wife in lieu of the CAPS for confidence on long overwater flights…

Antonio
Antonio
LESB, Spain
82 Posts
This thread is locked. This means you can't add a response.
Sign in to add your message

Retracting flaps on touchdown to maximise braking?
Trip to Canaries
Trip to Southern Spain
When bureaucracy and overregulation pose a major hazard to safety