and the city of Andorra as seen from above… 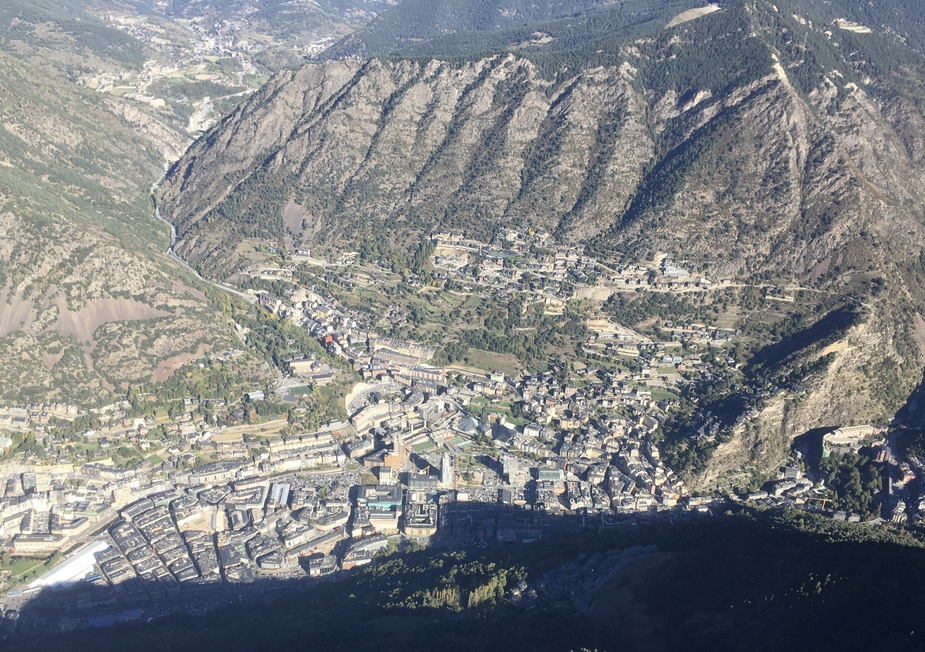 Very nice event – I hope to meet up with you guys again soon! -Mickey

Not without some last-minute planning challenges

It was apparently due to a French ATC strike, and was dealt with by departing VFR, and once airborne, nobody cared about any CTOT. Same as this.

I am going through my photos and will post some later.

The airport on the way in, from FL140 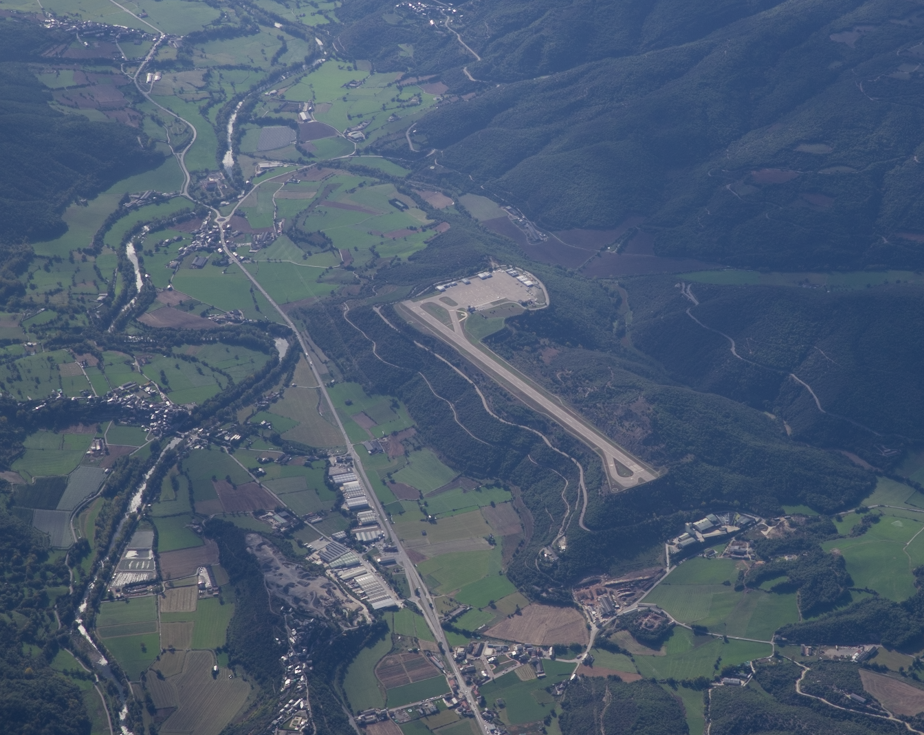 First view from the end of the 03 IAP: 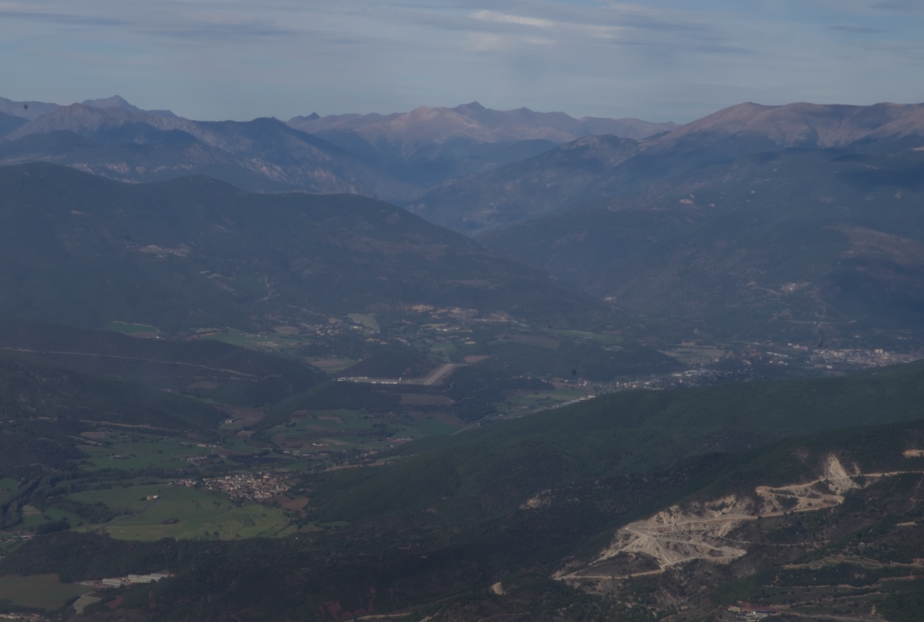 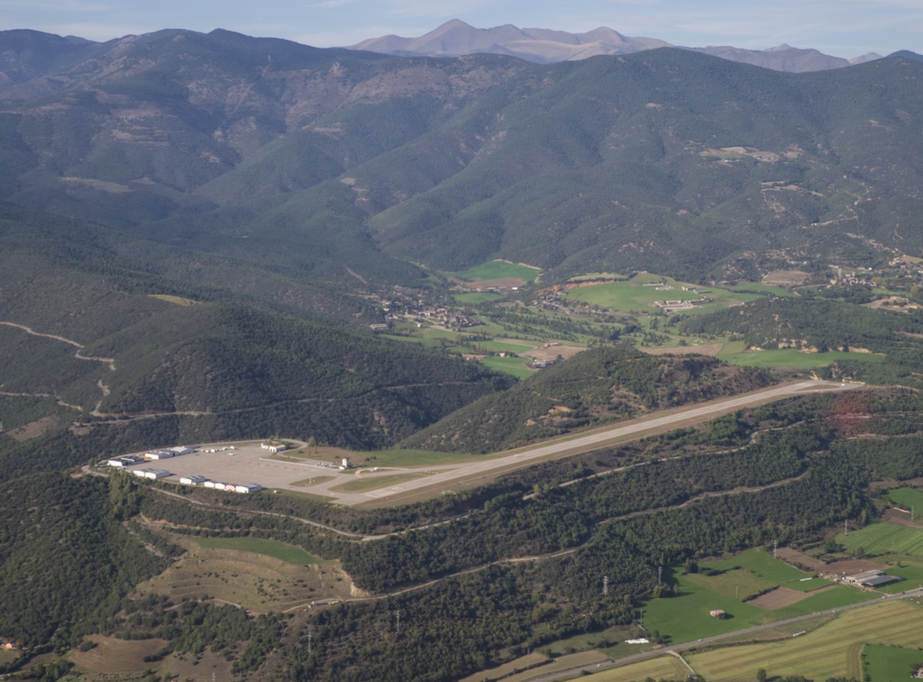 Turning left base onto 21 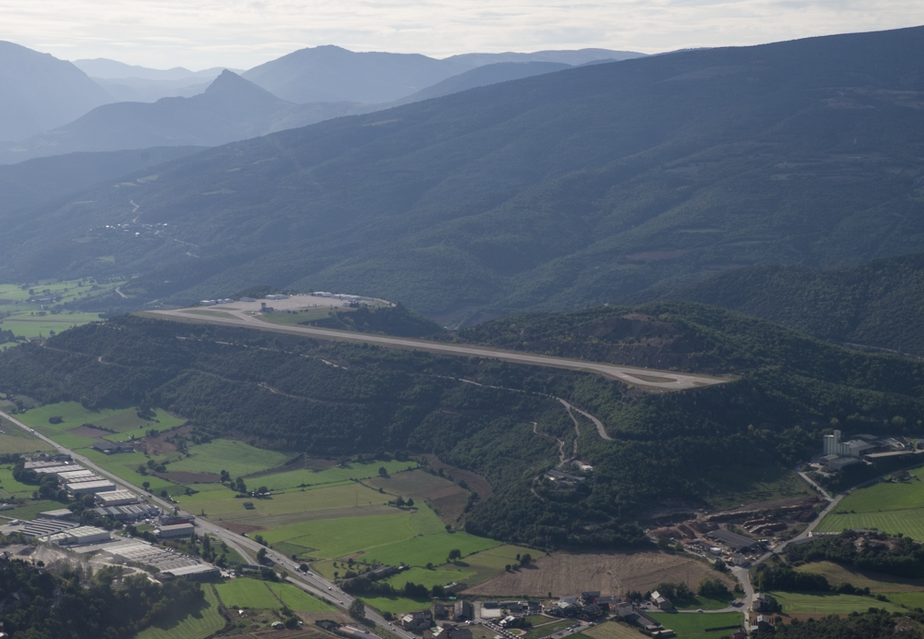 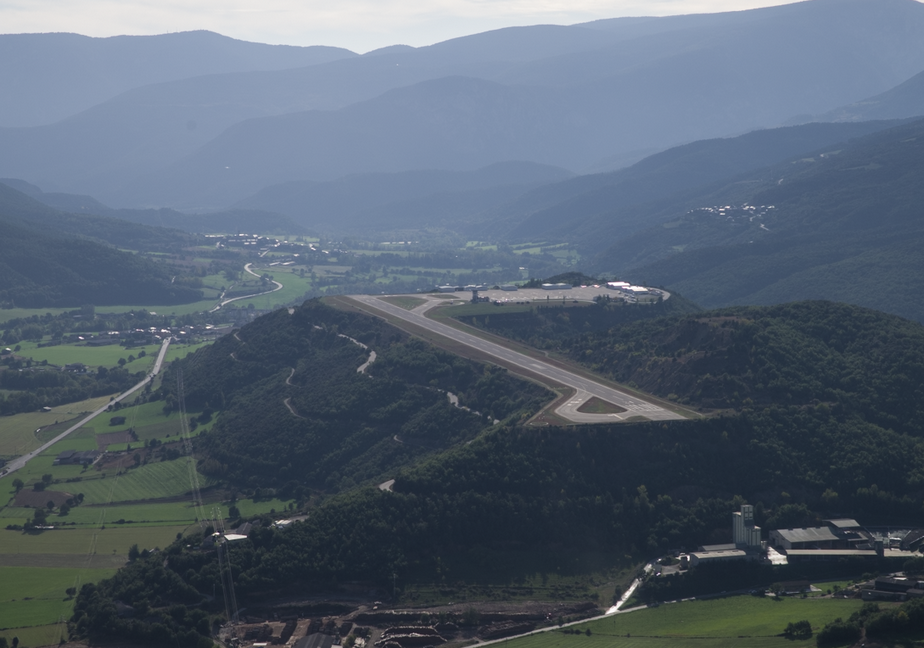 David made it all the way from the UK in a C172 – his first trip outside the UK! Now when I think of what hardware was available to some people who dropped out…!

The place is fully up with modern times. She is taking a selfie! 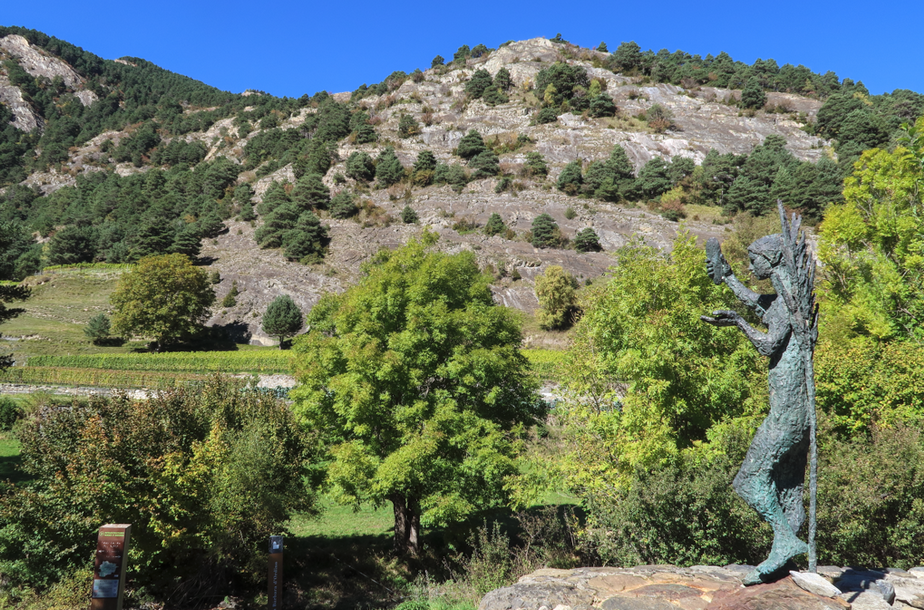 Andorra town itself is a huge shopping mall, but there are lots of buses which take you to scenic villages 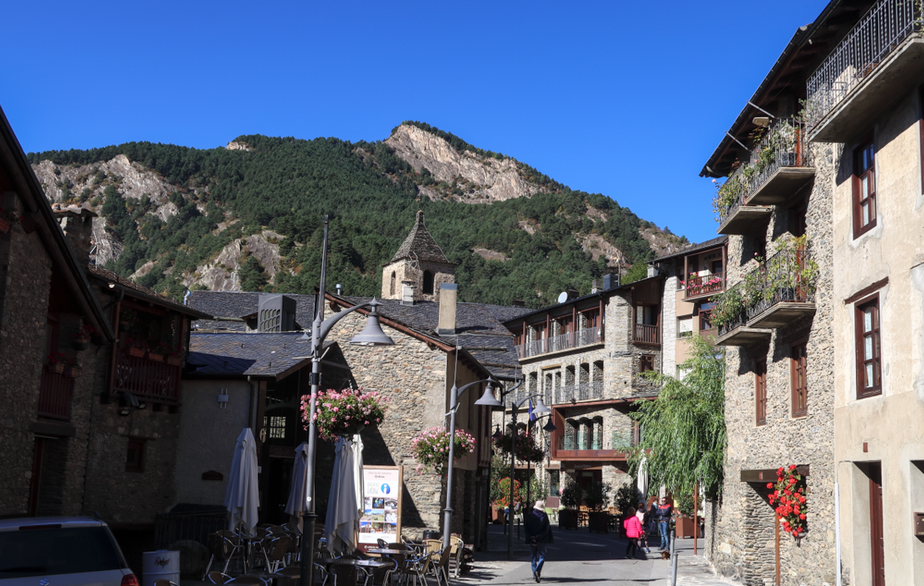 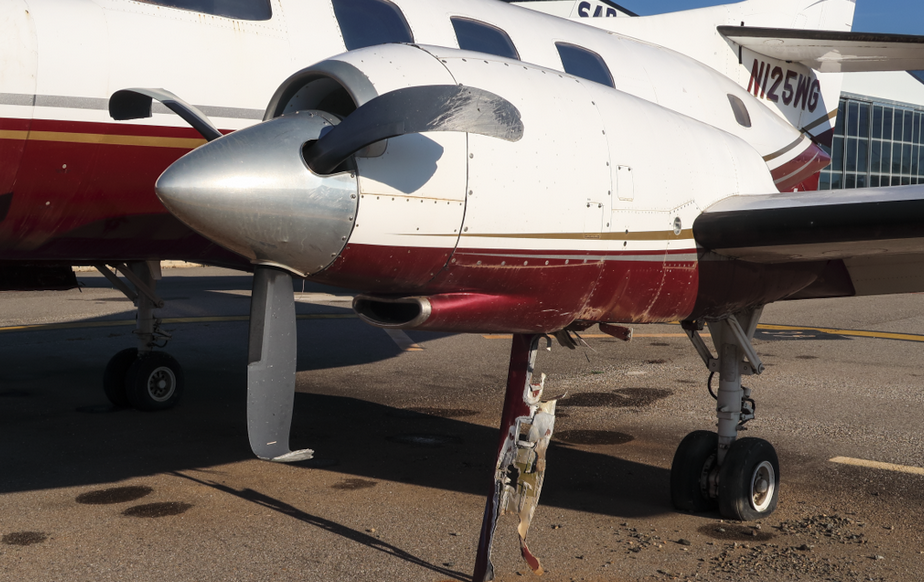 Departure from 03, right turn, and climb steeply to get through the canyon marked with the arrow, to the south 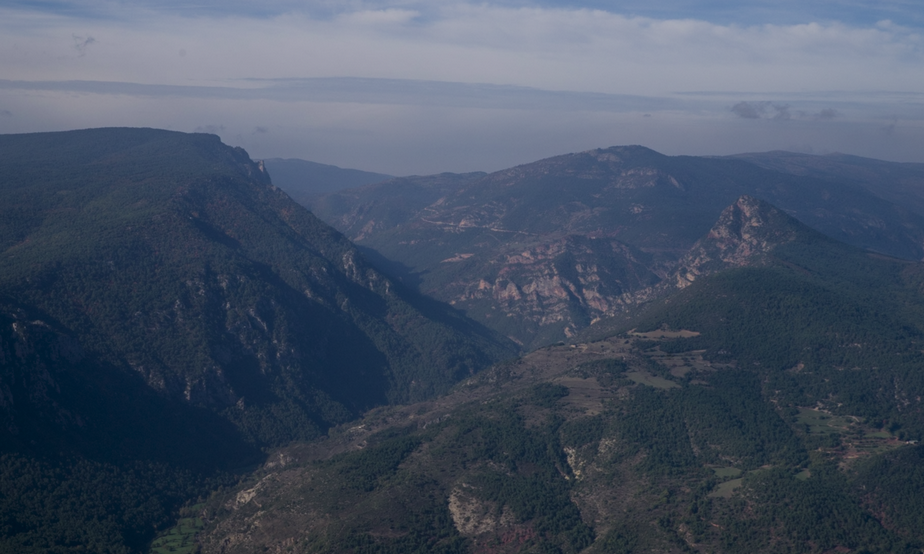 The TB20 soon outclimbed the terrain so we turned right to go back north, straight over the mountains, to FL140.

There was some mixup with ATC. The airport was unmanned at the time of departure, so the idea is to climb up and pick up an IFR clearance from Barcelona. But their radio works so badly in the mountains that it was not until ~FL100 that we got in contact. They didn’t want to talk to us (busy with airliners etc) and then at FL135 said the max is FL125! That’s really close to the terrain, but they said OK climb FL140. Got a squawk of some sort… Never issued an IFR clearance (said we were VFR) and then we lost them and changed to Toulouse who said we were IFR and indeed the squawk was the IFR one for the rest of the flight. Then down to FL100 right after the mountains.

The Pyrenees are a lot more rugged than the Alps 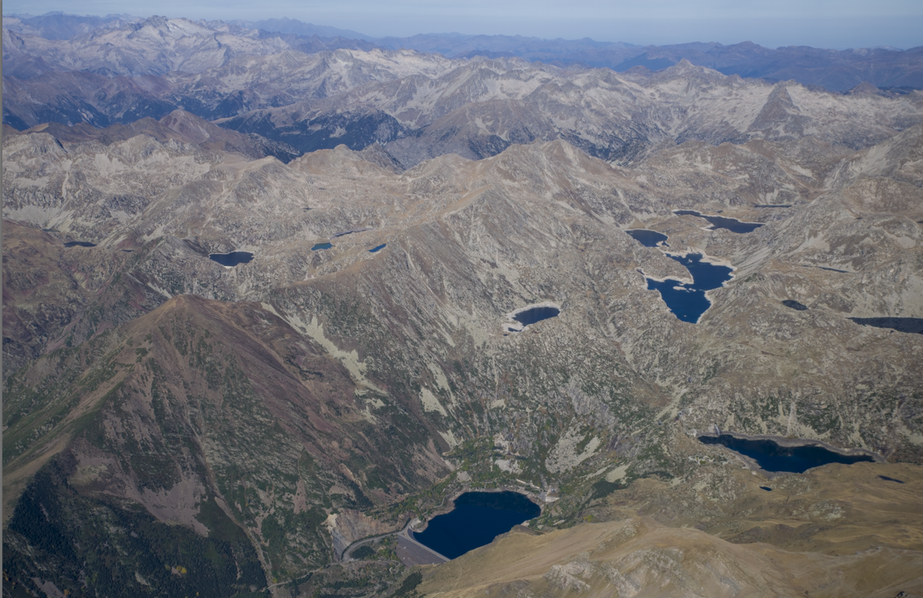 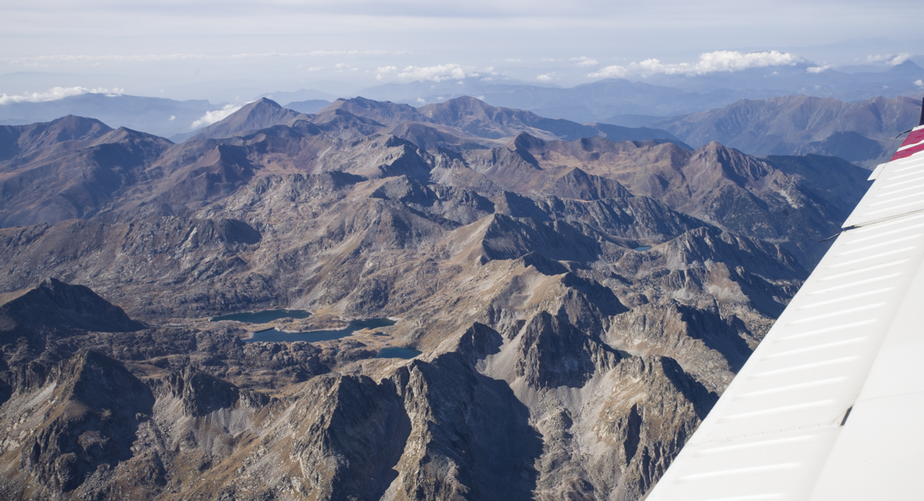 A bit of snow here

France – fields and fields all the way home 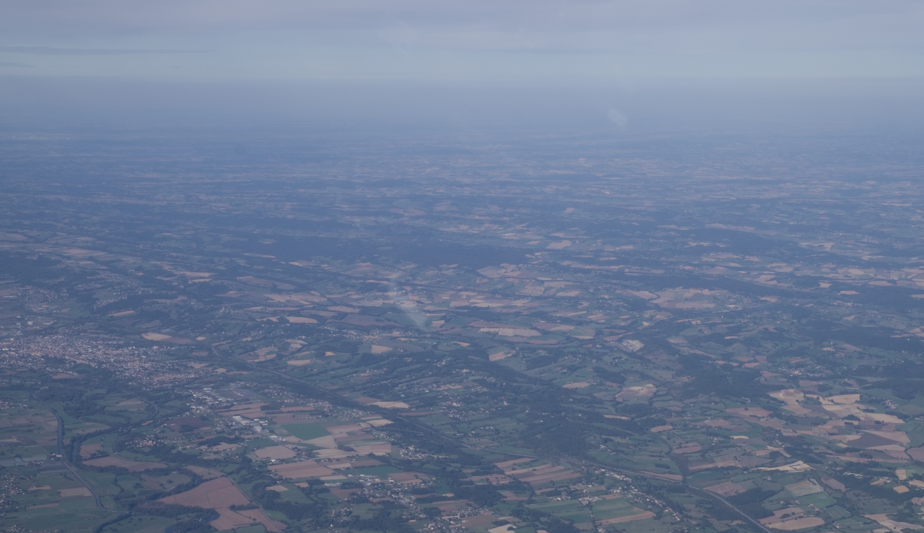 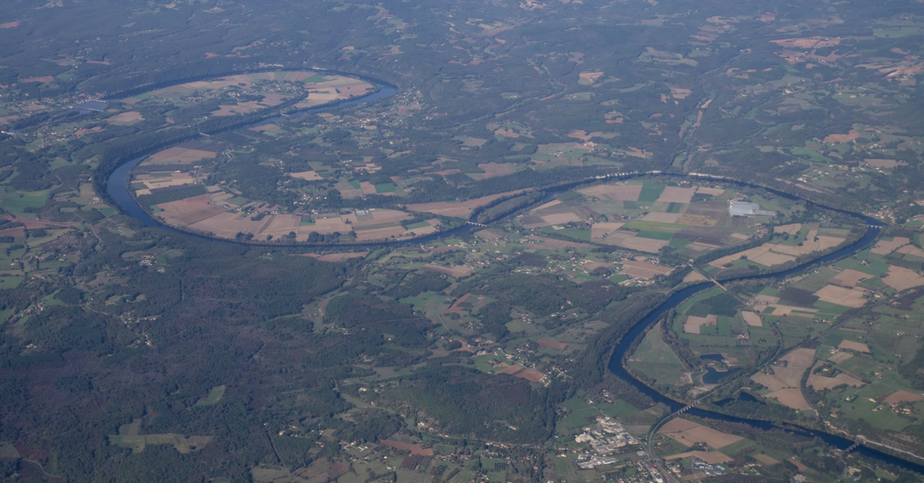 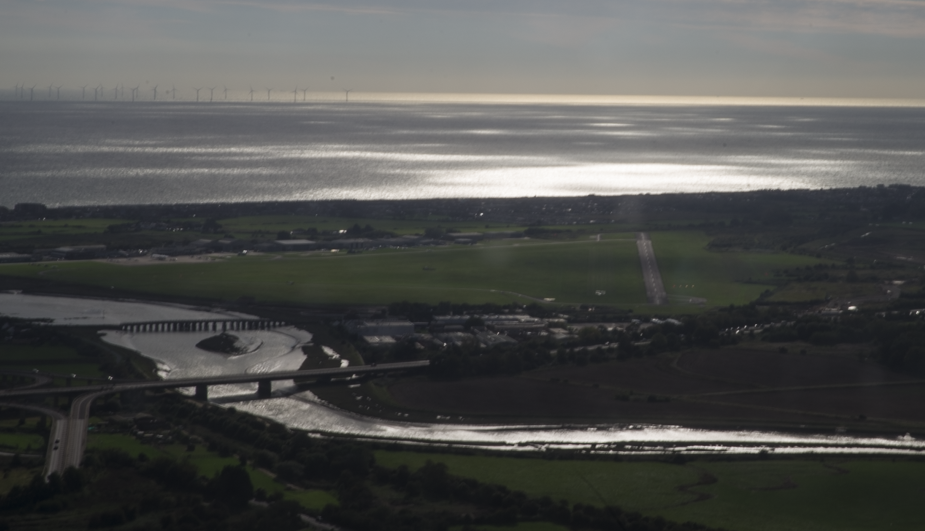 We had a super nice group. It was great to meet everyone and a lot of new people.

thanks to the organisers Aart, and Peter, for that successful fly-in

Also wanted to commend Carcassonne LFMK for what was a record worthy turn-around, all of 18 minutes for taxi-in, refuel 2 aircraft, take a leak, taxi-out!

and take a picture 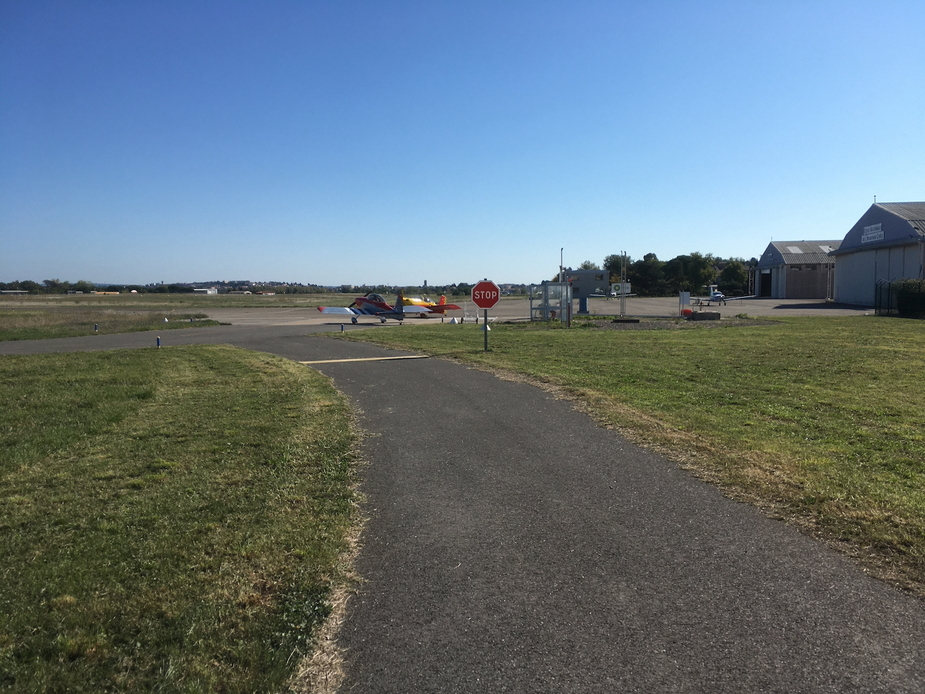 Carcassonne is nice. You did well to get fuel rapidly (we had problems during our 2016 fly-in) although I guess Sunday is a lot easier.

I’ve just downloaded the video from the camera and the camera got the entire flight there and back. It almost filled up but not quite

Departure to the south: 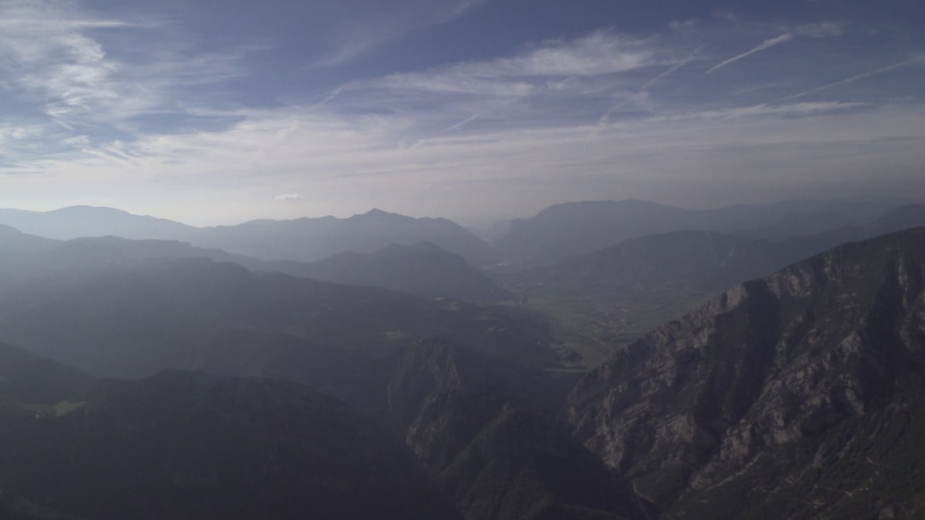 In terms of scenic flying, this was a very high value fly-in. 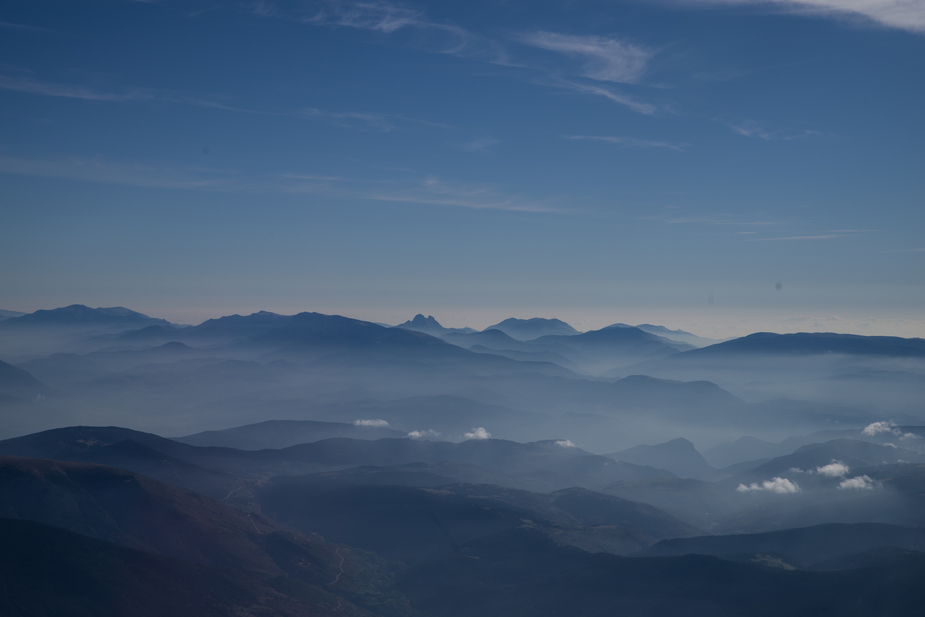 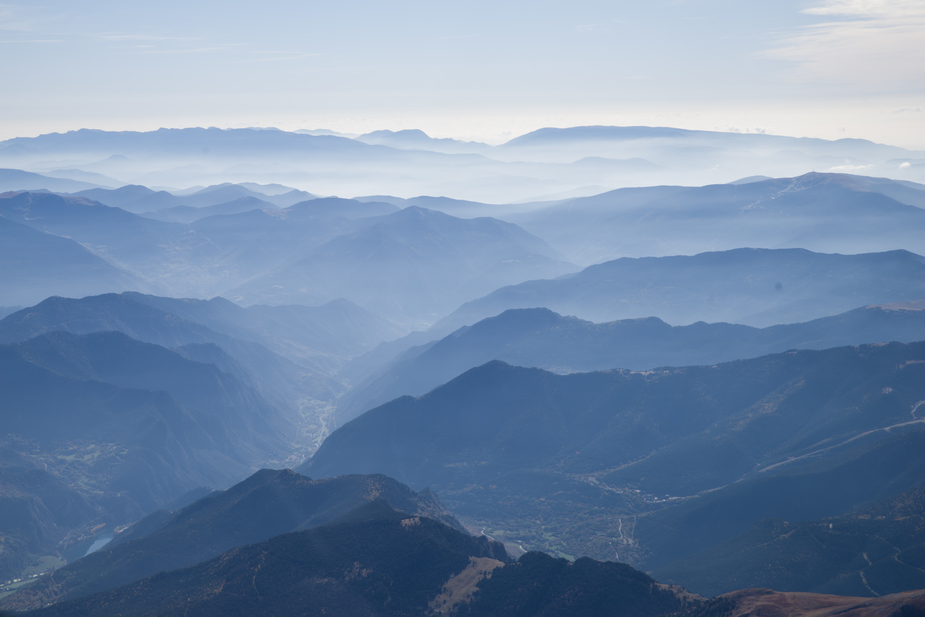 Ken Charney died in Andorra, he was one of the fighter aces who defended Malta, and also one of the 550 RAF pilots from Argentina in WW2.

Volunteers from Argentina had the peculiar distinction of being aces on several sides of the conflict, although not because they changed their minds during the war!

Great to see a C172 make the journey, hopefully David posts on the journey and where he stopped for fuel. FL140 IFR is above the service ceiling of a PA28, and arguably does not meet minimum climb expected/required (?) in airways of 500 fpm, so assume the second leg would be VFR.

Most normally aspirated SEP in theory are reducing separation on airways due to not meeting minimum climb performance, say above FL100.

Most normally aspirated SEP in theory are reducing separation on airways due to not meeting minimum climb performance, say above FL100.

Stop finding excuses, I am sure the Warrior will be happy there (ATC can cry if they wish

In France, for cruising in that band (called LTA as it stands for low traffic area), I barely see more than one or two aircraft cruising there everyday in FR24, when I am flying C172 there is hardly anyone else, apparently they just give you 1000 to show on ModeS TXP = you are easy to identify, I doubt there is any airways separation concerns?

However, in departures, ATC want to know if you can achieve +500fpm all the way to FL120, if not they want to know about it before you lined up, maybe that is a separation show stopper?

FL140 is not required to get into LESU. The base of the pass to the south is about 6000ft.

+500fpm is never required/requested (by ATC) in GA ops and ATC are well aware of this.

It was fairly obvious that the TB20 could have departed directly to the north from LESU and outclimb the terrain by at least 2000ft, but going south a bit was better. Departure track: 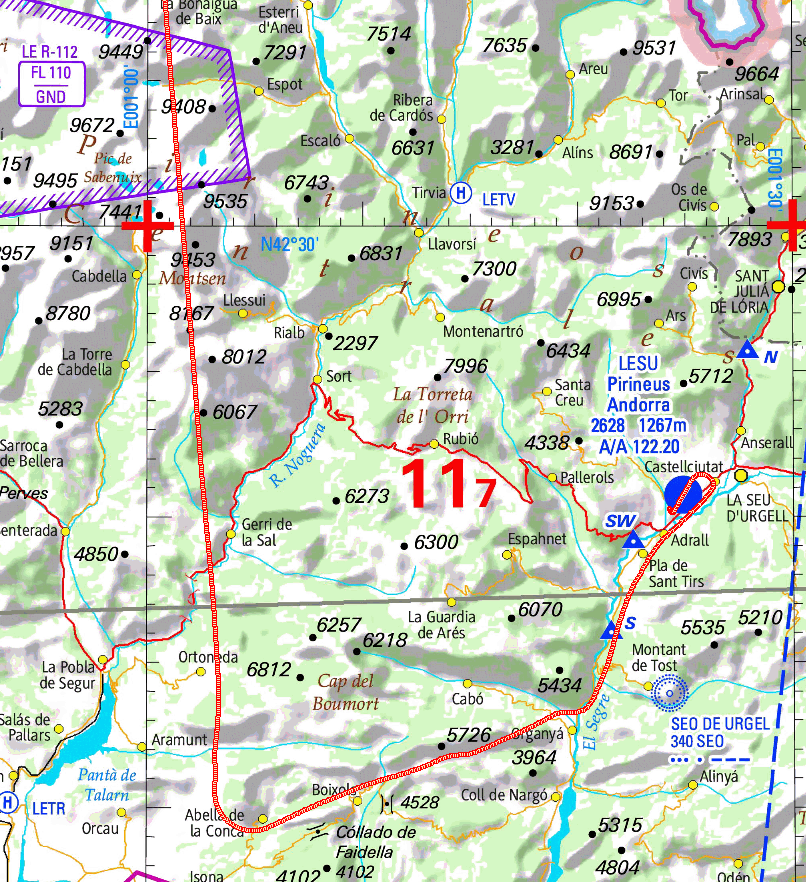 Arrival – broadly this was the RNP 03 track 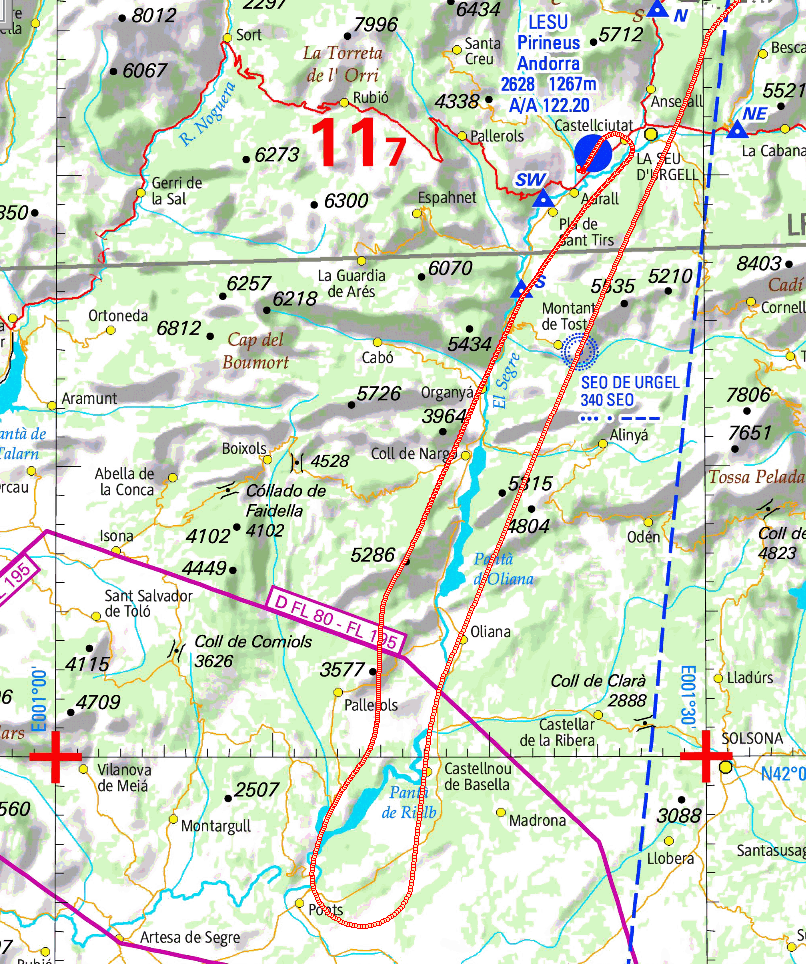 Is there actual any rule in Europe (and is it even standardized across Europe?) which requires pilots to report when they can’t maintain 500 FPM, as is the rule in the US?
I know that in practice ATC don’t care, but still, is there some rule like that? I am almost sure @Airborne_Again would know…

boscomantico
Mainz (EDFZ), Germany
125 Posts
This thread is locked. This means you can't add a response.
Sign in to add your message