A short trip over Switzerland is always a very nice and satisfying experience. As the weather in the Alps was quite disappointing during the last couple of weeks, it was a positive surprise to have blue skies on early Friday morning. Knowing that thunderstorms will develop quite fast in the afternoon, I decided to make just a short “hop” from my new (third) home base Buochs (LSZC) to Wangen-Lachen (LSPV) and back via Zurich (LSZH).

Buochs is the home airport of Pilatus Aircraft and … (most people don’t know about) … the second and last Swiss airplane manufacturer: Lightwing. They build the brand-new EASA-LSA certified “AC4”, with a 100hp Rotax 912iS Sport, and a full glass cockpit panel from Dynon. The designer was Hans Gygax from Switzerland, which also designed the famous C42, which is today manufactured by Ikarus in Germany and one of the most-sold ultralights. The AC4 is however a fully CS-LSA certified aircraft, with 600 kg MTOW and is optional also available with the new Rotax 915iS for towing sailplanes. It offers also a lot more space than the C42 and it flies way more stable and comfortable than a C42. Finally, the AC4 has a true Swiss precision “finishing touch”, where the C42 feels more cheaply build. 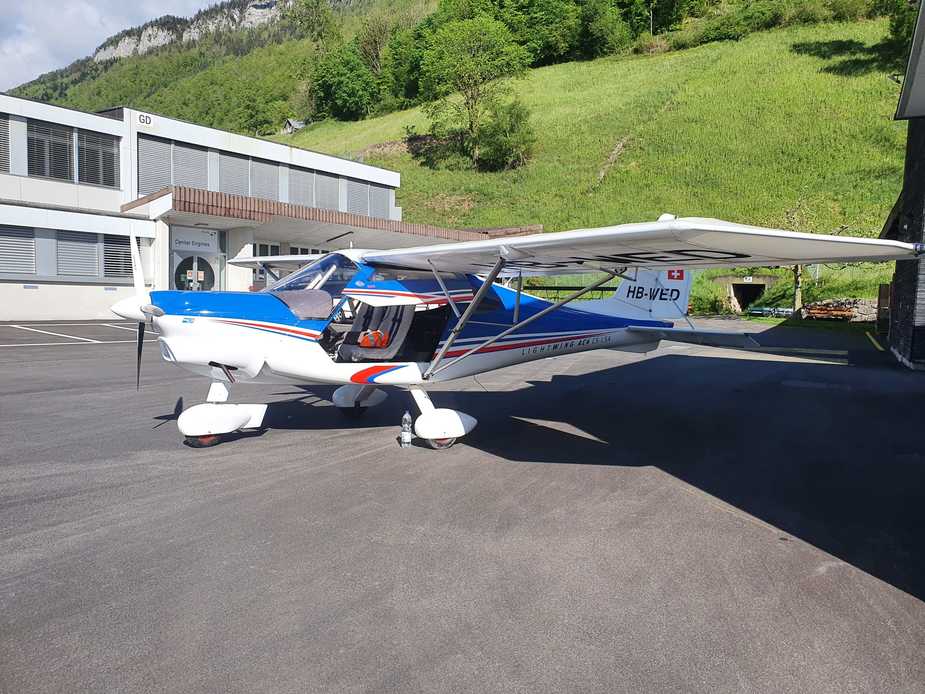 Lightwing is located directly next to Pilatus Aircraft. To get to the runway, one needs to taxi across a busy public road. The pilot can activate traffic lights with 3 clicks on a special dedicated frequency, so the traffic needs to stop before crossing the road. The runway itself has also a public road crossing, like small “Gibraltar”, including barriers. 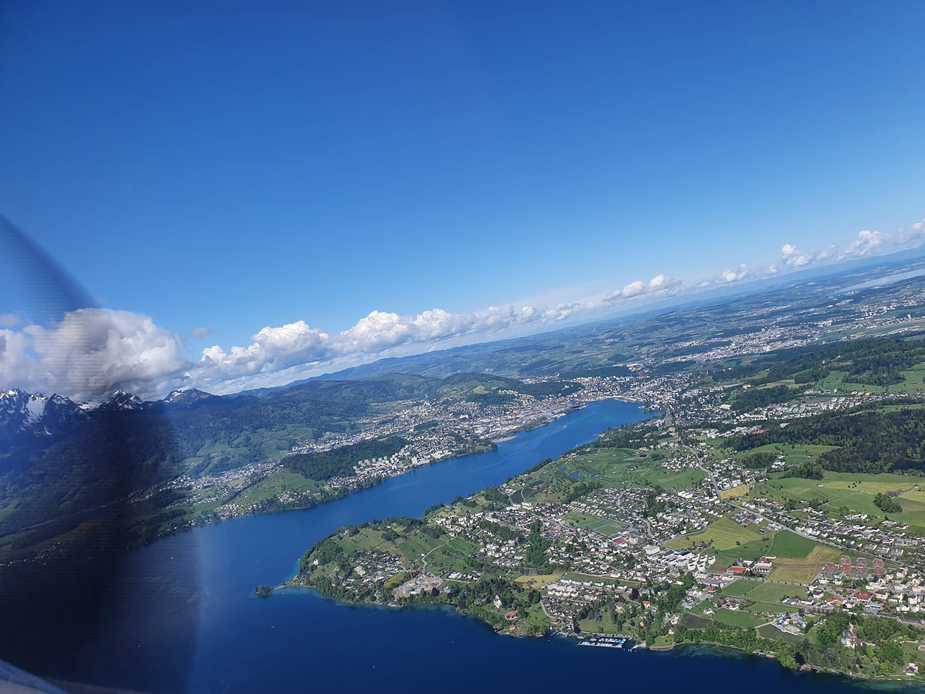 As my passenger was a little bit afraid in the beginning, I didn’t want to make the first flight too long, so we went via the Rigi and Sihlsee directly towards Wangen-Lachen. A very nice small airfield, located directly next to the Zürichsee with a good restaurant on-site. It’s called “the flying beach of Switzerland”. The airfield is officially PPR, but in general, it’s almost always open. A pre-recorded voice on the phone will tell you: “The airfield is open”. After all, my passenger did make some nice pictures for this report. 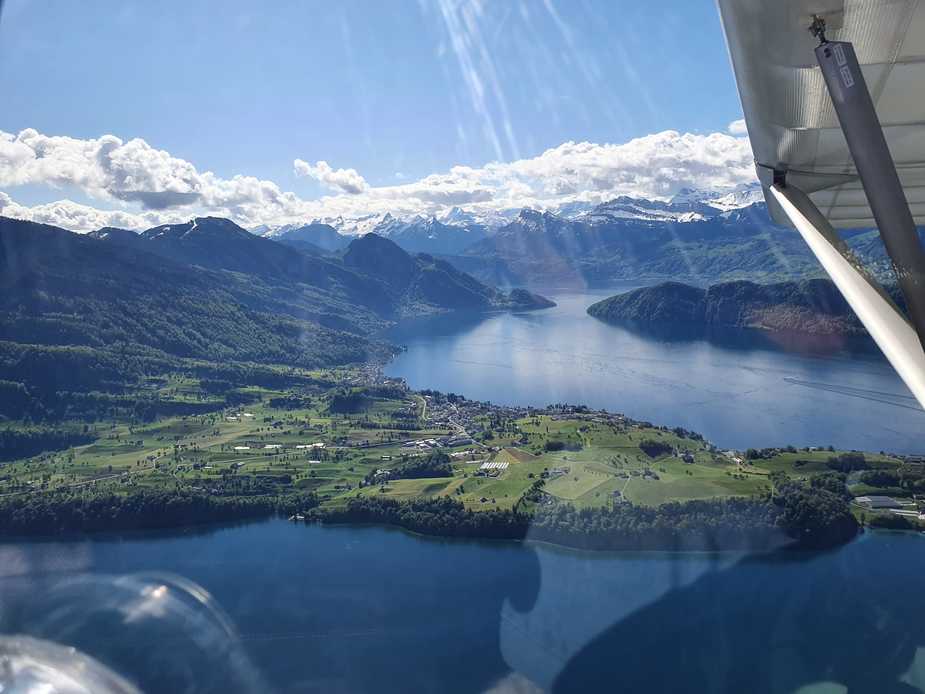 View back towards Weggis 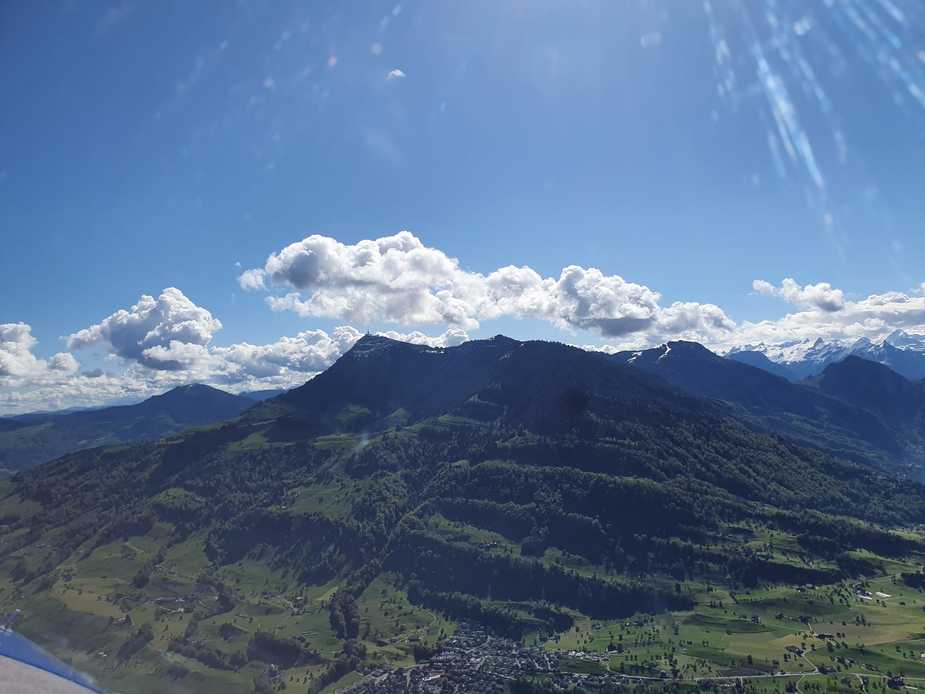 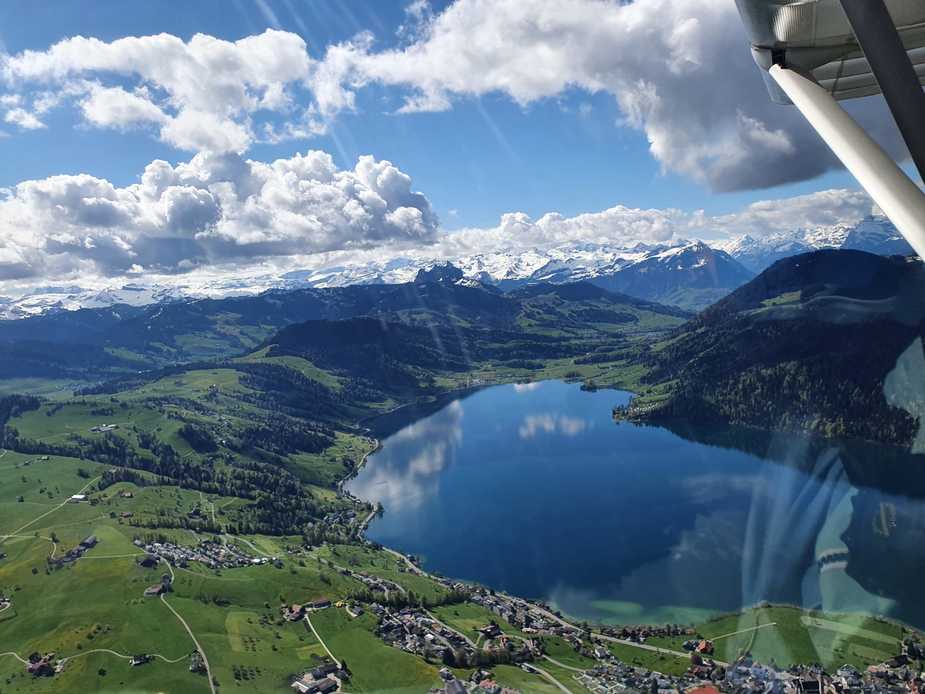 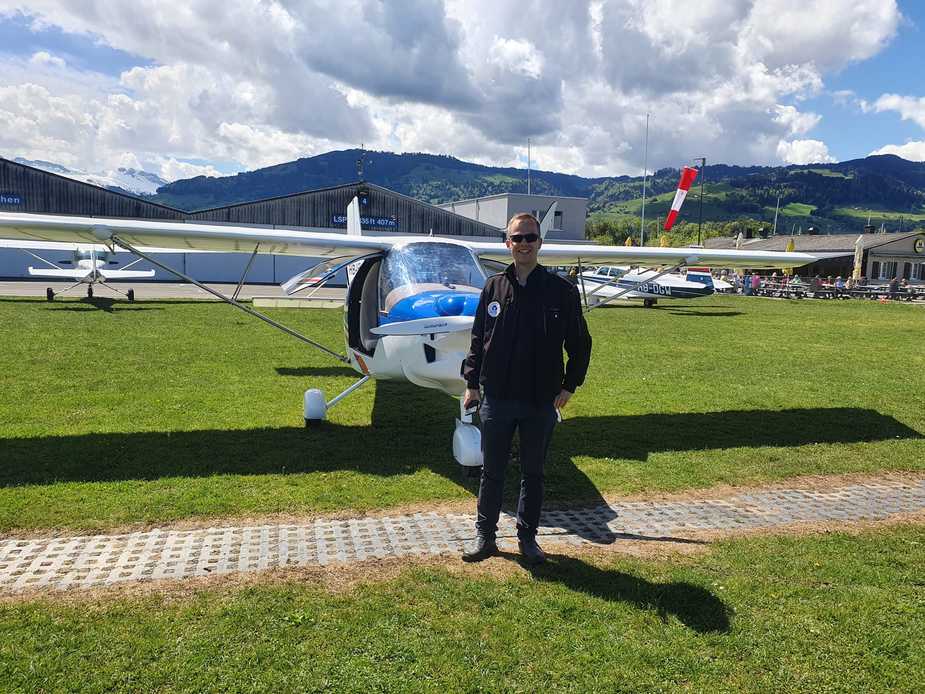 A happy pilot after landing

After departing out of Wangen-Lachen, it was difficult to get in touch with Zurich Information. As always, they are very busy on sunny days, this time even with pilots how wanted an IFR-pickup. No chance. Luckily, the Swiss have so-called “Delta” frequencies. This controller is sitting next to Information and has almost nothing to do. I was the only traffic on his frequency. The ATCO was very friendly and directly coordinated a CTR-crossing through Zurich for me. After handing me over to the Tower frequency, there was more VFR-traffic going on in the CTR, than real airline traffic. Crazy times. On the other hand, Zurich is always very accomodating for CTR crossings, even in pre-corona times with a lot of airliner traffic. They almost never refuse a crossing, as long you use the W, E or S arrival and departure routes. 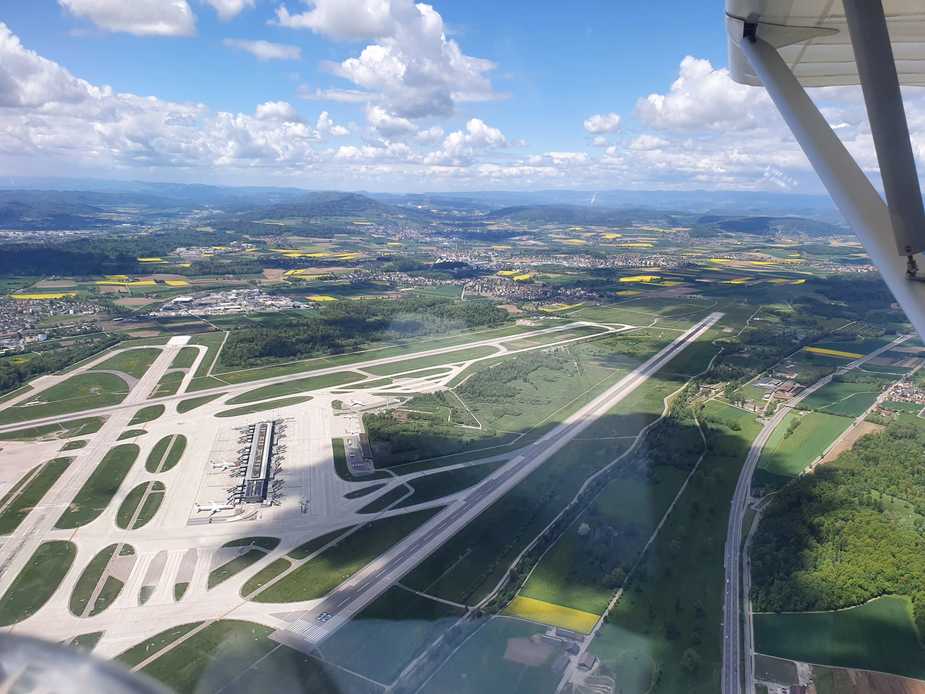 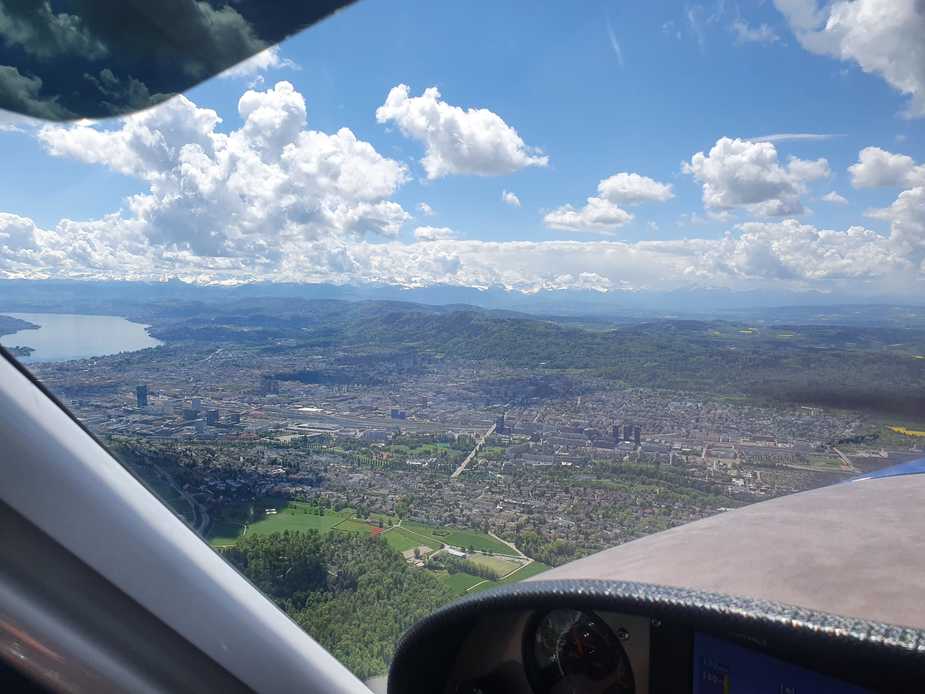 After leaving the Zurich CTR, I switched back to Delta, where the controller was expecting me already. I flew further in direction of Willisau VOR, before turning back over the Sempachersee towards Luzern and Buochs. One could watch the “development” of thunderstorms quickly above the Berner Alps, so it was also better to go home before the bad weather would arrive Central-Switzerland. It’s always interesting how bad weather in the Alps can also affect your flying in perfectly nice weather above the flat hills of Switzerland. There was quite heavy turbulence so now and then, coming from waves over the mountains up to Zurich or Jura. 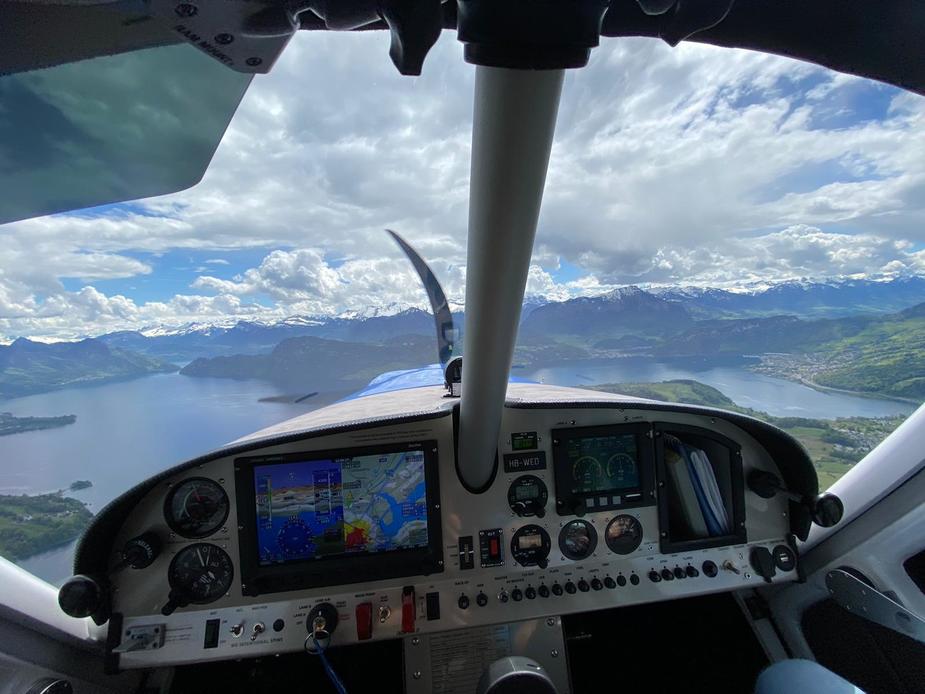 One has to say, the arrival in Buochs over the Vierwaldstättersee (Lake Lucerne) is maybe the most scenic approach of all airfields in the Alps. It’s just breathtaking every single time. The northern traffic pattern goes over the lake around the “Bürgenstock” mountain, so it’s not possible to see the runway at all before turning from base to final. As the Tower was inactive today, I had to activate the barriers and runway lights on my own. This procedure is unfortunately only accessible for home-based pilots. Guests are required to take expensive handling for lowering the barriers outside Tower operational hours, but the airport is strictly PPR anyways. 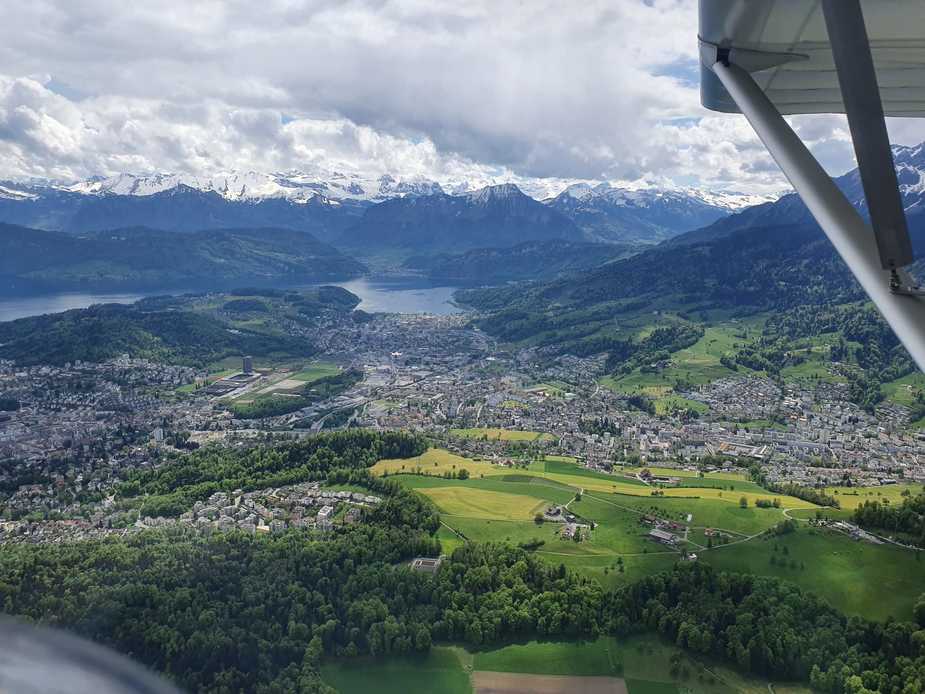 Approaching Kriens. Straight ahead (on the other side of the lake) is the base to final turn for runway 06. 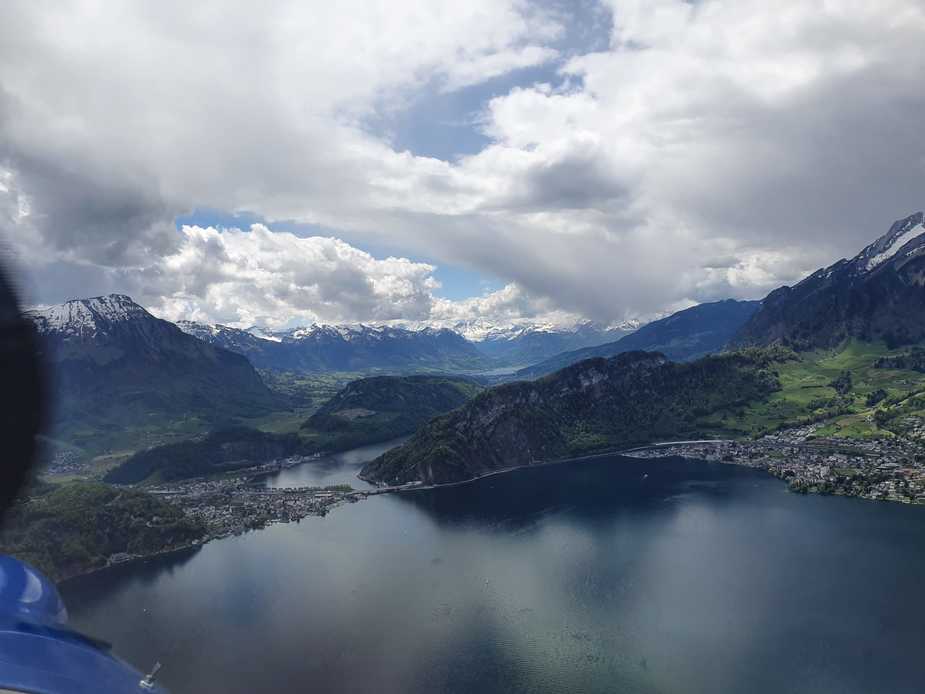 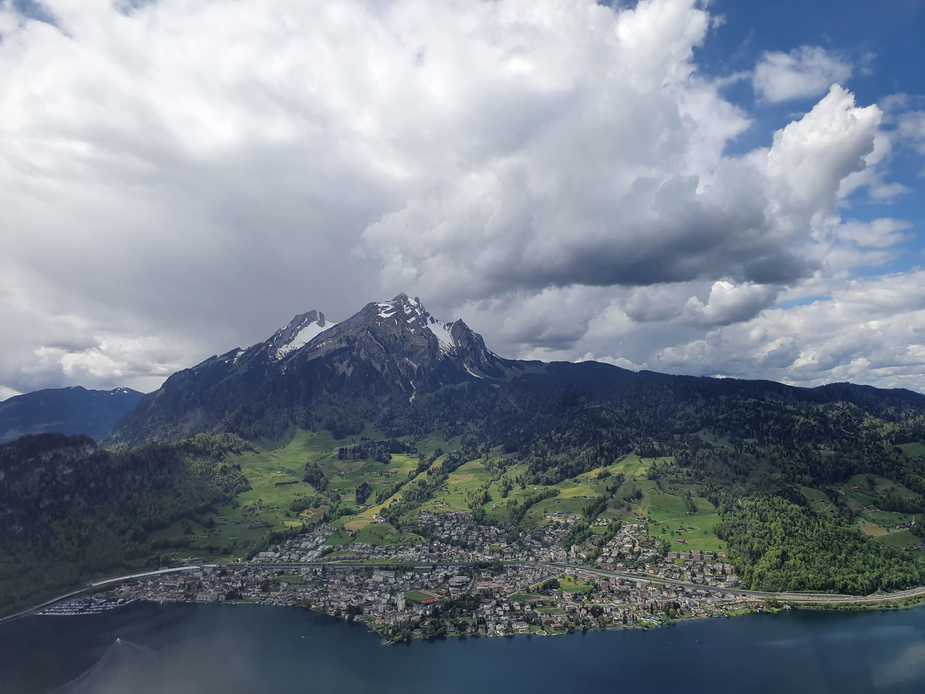 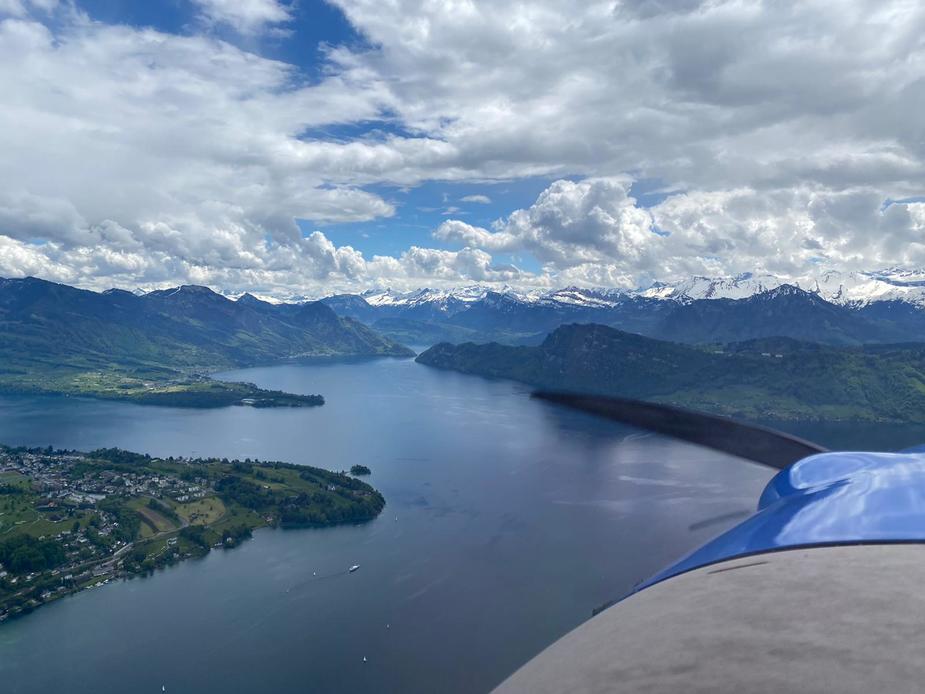 Vierwaldstättersee with Bürgenstock, shortly before joining base 06. The nothern traffic pattern goes around this mountain in 4.000 ft. 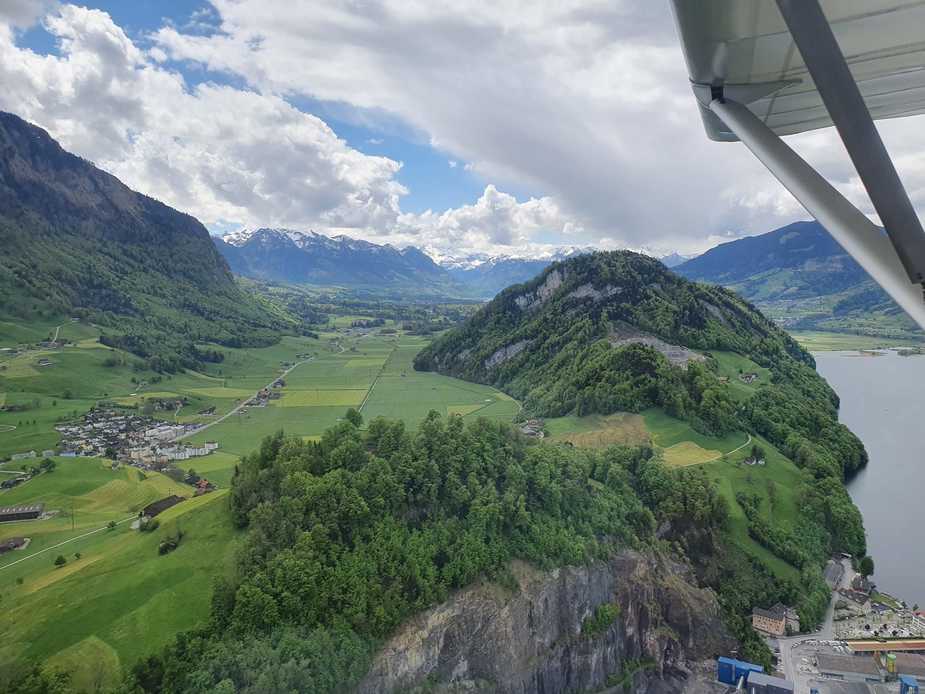 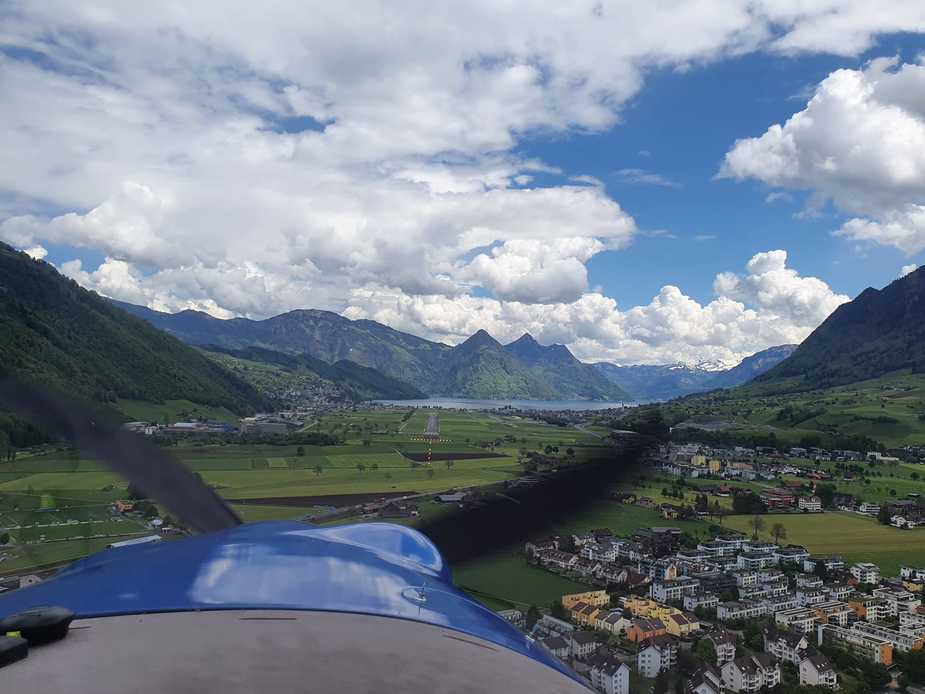 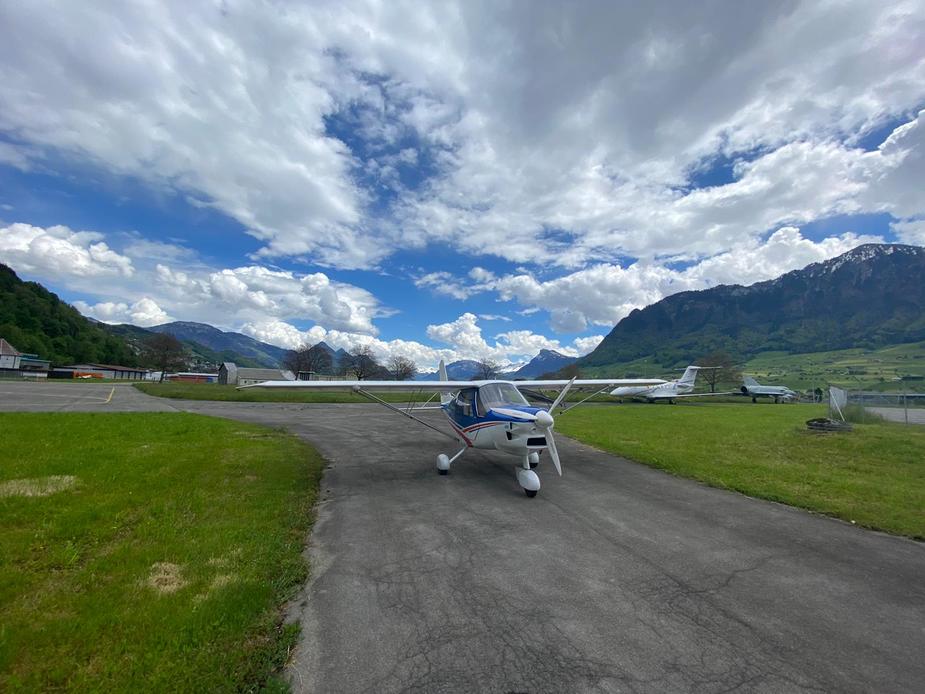 A successful short trip in a new airplane. Hopefully, the weather will be better soon for a bit longer trip through the Alps!

Wonderful photos of a beautiful place!

I once stood on the south side of the Vierwaldstättersee and watched a PC-21 doing BIG aerobatics over the lake, using a lot of altitude up and down. Then we rushed up to Andermatt (crossroads of the Alps) for dinner.

Nice report! I have done some flights in that area and it truly is scenic!

I have looked at that aircraft before. What is the empty weight of it? We recently bought LSA aircraft to our Aeroclub but we struggled to find any with low enough empty weight.

I went to Wangen Lachen in 2004, on a long VFR trip down to Crete, and got stuck there for a few days in the rain

Wangen Lachen is one of my favorite destinations, a mere 15 minutes from Zurich (1-20 by car) and quite scenic. Can’t wait to be back there.


What is the empty weight of it? We recently bought LSA aircraft to our Aeroclub but we struggled to find any with low enough empty weight.


I went to Wangen Lachen in 2004, on a long VFR trip down to Crete, and got stuck there for a few days in the rain

Oh dear, that was certainly not the best “introduction” to the airfield.

You should definitely come back with good weather once.


I once stood on the south side of the Vierwaldstättersee and watched a PC-21 doing BIG aerobatics over the lake, using a lot of altitude up and down. Then we rushed up to Andermatt (crossroads of the Alps) for dinner.

Sounds spectacular! Pilatus does indeed a lot of testing around the lake. They have even some special restricted areas (LS-R) for test flights, but those are only rarely activated by NOTAM.

This AC4 in Buochs sounds awesome, especially since I live around the corner.
How would I best go about renting it?

Unfortunately, the AC4 in Buochs is not available for public rental. I would suggest you contact Flubag in Luzern-Beromünster (LSZO) or flying school Eichenberger in Buttwil (LSZU), which both offer a AC4 for rent.

Frans
EDKM, LSZC
10 Posts
This thread is locked. This means you can't add a response.
Sign in to add your message

A trip to the Alps to get nice photos (and a video)
Can you use an aerodrome outside its opening hours
Am I dreaming this? A European circuit
Top ten (twenty?) busiest GA airfields in your country?