Please help me understand what just happened, almost an in flight fire? with footage.

Hi, how are you.
I had a scare yesterday, but not sure what really happened. This happened in Germany, and it was my last flight there as im heading back to the UK.
I decided to climb up to 9.000 ft, and see how the airplane behaved, what performance could i get.
As i was leveling up at 9.000 ft, i heard a pop and i saw on the left hand side of the panel, where the analogue gauges stack is located, Fuel level, oil pressure, oil temperature, etc, a spark coming out of the panel, and falling down inside the Fabric pocket on the left side near my legs.
It sounded like a light bulb exploded, and the spark quickly fell down.
I kept a good eye on the fabric pocket where the spark fell in fear of a fire starting there, as i descended from 9,000 ft.
I quickly head back to the airport suspecting an electrical fire could start in any moment, i swear i heard ‘abnormal’ noises of the alternator/engine, but this could just be paranoia, i will have to review the footage to be sure.
I did not want to mess up to much with the electrics so i just lowered the gear on the last moment and landed without flaps.
I briefly thought on using the fire extinguisher, in case the fabric of the airplane caught on fire, but then figure the fire extinguisher dust inside the cabin would not be a good idea.
At the moment i was really sure there was some sort of electrical problem or short, but after reviewing the footage i have doubts.
The airplane is from a licensed ATO, a c172 RG with 180 hp, variable pitch prop and the gear. The panel is new with 3 Garmin g5. The engine is also new and sounds very nice, and starts immediately. I have about 200 hours in various single engine airplanes and been flying for about 2 years.
I reviewed the footage and i really cant figure out where that ‘spark’ came out of, also, there are no visible marks on the panel, or anything.
i also review my electronic gear, tablet, voice recorder, etc, everything looks good.
this ‘pop’ to me is related with altitude as it happened when i was leveling at 9,000 ft.

Please take a look at the footage

In several frames of the footage, the “spark” appears to be exactly square?!

It seems to originate here 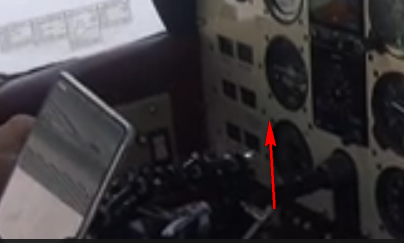 but there is nothing there, no hole, etc.

Is there anything missing on any of the instruments? Sometimes, an illumination lamp is front-accessible.

maybe its from the map lamp? i did not check the bulb after the flight.

it shoot from the lamp and bounced on the panel?

Can you make the video downloadable? Could check frame by frame in a video editor – should give an idea where it came from.

Static electricity? I am only on an iPhone, but to me it is reminiscent of a tiny bit of ball lightning.

What happens after, did you land/divert? or continue flight?

Seems like static electricity accentuated by dimmer lights in your cockpit?
I have NorthFace jacket that makes a whole lights show by night when I get out of the car

i was at 9,000 ft and no airfield was close. i even thought on landing on a random field on the event the fabric on the airplane caught fire, or there was an electrical fire. I was ready to switch off the master.
That did not happened and i took a close look to the area where the spark came of until i landed about 20 minutes later at my home airport.

Hi, thanks for your replies.
ive manage to extract every frame from the video, you can see them here:
https://ibb.co/album/dj26Qa

at frame 76 you can see the “spark” for the first time, however, between frames 71-72-73 you can see a shadow on the same area
do someone else can spot anything strange?

Also, in the original video audio you can clearly hear the pop before the “spark” falls

AleNovo
United Kingdom
17 Posts
This thread is locked. This means you can't add a response.
Sign in to add your message

Hunter crash at Shoreham
Private drones - rules and dangers
Have you ever declared an emergency?
Smoke or a burning smell in the cockpit