Apparently another hot shot at Oskosh this year. A scaled down Mustang is nothing new, but this one is special. It’s 70% size, 100% carbon composite. The special thing is the attention to detail. Every rivet is modeled, every detail! It looks like the real thing, but is nothing like the real thing. Don’t know how I feel about modeling fake rivets, but it certainly is full attention to detail

The kit is from a German company who used to make scaled RC planes using the same building techniques.

The engine is the Rotax 915, giving it very good performance, and very cool scale like sound as well.

A low pass with sound

This project has been on and off for probably 5 years and they exposed it at Aero a few years back. Indeed amazing how it looks, and likely flies well too! As to looks, the only dissonant is the proportion of the prop blades vs the aircraft. Looks like tooth picks just barely making it out of the spinner. On the real thing, that masculine prop is something that gives the aircraft its looks.

It’s very nice that these initiatives are there, even if the chances of this becoming a success are, let’s say, reduced. A niche within a niche. I suppose they have some private investor with enough money and a love for the P51 behind it. The initial investment must have been significant.

They are already selling more than they can produce. They are going to ramp up the production, according to the spokesman in the video. I would rather think of this as a cool looking and better performing Shark. A Shark costs $250k, a SW-51 costs $150k. Yes, you have to “build” it, more like mount stuff onto the carbon fuselage and wings. It has better performance, is aerobatics, can be IFR equipped, can fly longer distances (it can take 200l of fuel, that’s 10 hours at best economy cruise with a 915).

What stands out is the looks and performance. And it does indeed sound nice

That definitely does not hurt at fly ins.

I got a heads up for another (soon to be) kit from the Czech Republic. It as 80% replica of the A6M Zero, with real rivets this time, and with a Verner 9 cylinder radial engine. The Zero is a much “friendlier” aircraft to fly than the original P-51 at least, and that radial sounds nice as well

It will also fit into max 600 kg MTOW. So, will go as both UL or experimental.

According to a friend who is flying a P-51 weekly or so, it’s very straightforward, big and gentle. I’m still waiting for the opportunity to hop in the back seat and try it myself – I haven’t yet been in the right place at the right time (he likes to fly in the evenings after work)


According to a friend who is flying a P-51 weekly or so, it’s very straightforward, big and gentle

Perhaps, but then everything is easy if you are current in what you are doing

I have never tried any real warbird, but from reading about them I got the impression that the Zero was perhaps the most easy going and maneuverable of them all. It also looks nice too, pure and simple lines, more like an icon. The reason the Germans went for the Mustang, instead of something else, was they had a survey, and most people (by far) liked the Mustang best. I guess this survey was done in the US. In the UK I would think the Spitfire would have won

It’s interesting the way they build the wings, both of them. They have a center section which stretches out a bit from the fuselage, perhaps 1 m on each side, then the extended tip comprising of more than half the wing is bolted onto the center section, easily removable. This is the same in principle as both the Onex and the Subsonex from Sonex, both for easy transport and storage. The designers are learning


I got the impression that the Zero was perhaps the most easy going and maneuverable of them all.

At least it was light. An idea behind the design was to get higher speed by not having any armour. It made the aircraft more easily damaged by cannon and machine gun fire but the increased speed more than made up for it by making it harder to hit.

Airborne_Again
ESKC (Uppsala/Sundbro), Sweden
vic
07
It is almost 20 years ago, when my lady and myself had a half hour flight in Max Vogelsang´s P 51 “Double Trouble 2” from Buochs in Switzerland, just like in the YT link below. In fact, this was a one time in life experience with a loop above the Aletsch glacier and a few rolls, last over the Vierwaldstätter lake. Even more dramatic for us as it was the very first flight in a SEP for us. Luckily it was only 30 minutes, otherwise we´d have had to pay a very thorough cleaning of the aircraft. In such flights you´d be advised to wear an overall as any unwanted material could be disposed in the overall – a lot more convenient for washing later !! Having a flight in a P 51 is a very smooth ride , a feeling of power and speed, but also feeling the weight of the aircraft : Smooth large actions in the air but not like typical aerobatics, just too heavy for this. A Yak 3 or 9 would fly circles around it at lower altitudes. Sitting in the rear seat was hot and smelly, behind 12 exhaust pipes in front, explains why pilots had masks on at all times . After touch down Max opened the hood for fresh air just in time for sparing us the disgrace of ruining the aircraft interior , but even so, it took a few hours for restoring our bodily functions. Well, one or two years later we started the PPL training and got our own 4 seat Yak the year after this – each of us had just one hour C 172 since PPL before getting the Yak transferred from UK. Vic 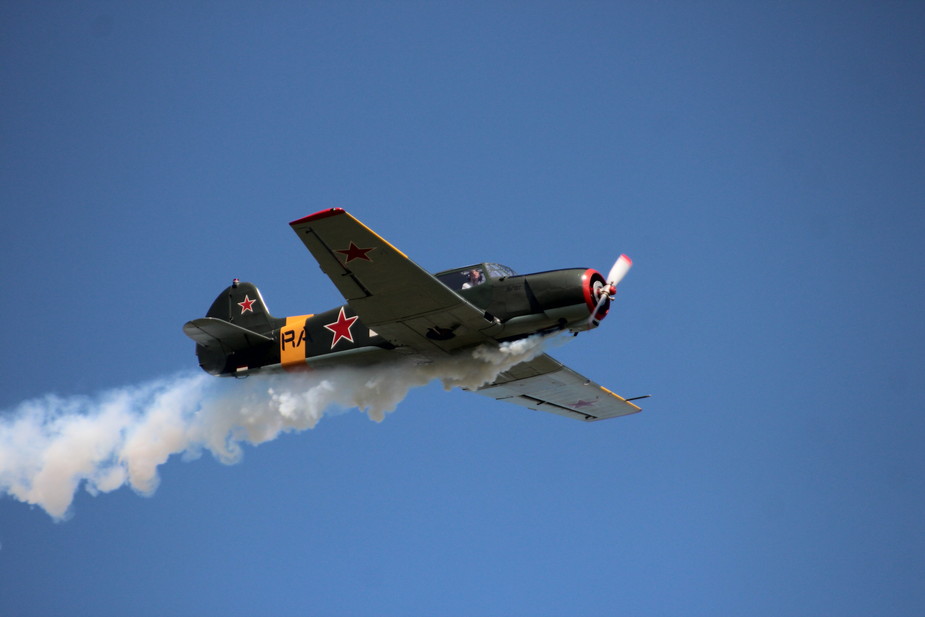 Dan
ain't the Destination, but the Journey
LSZF, Switzerland
8 Posts
This thread is locked. This means you can't add a response.
Sign in to add your message

All over for the Mustang?
3/4 Scale Mustang
Landing gear coming up all at the same time (and why not electrical?)
Schipol Wednesday