A new engine control idea for our old engines 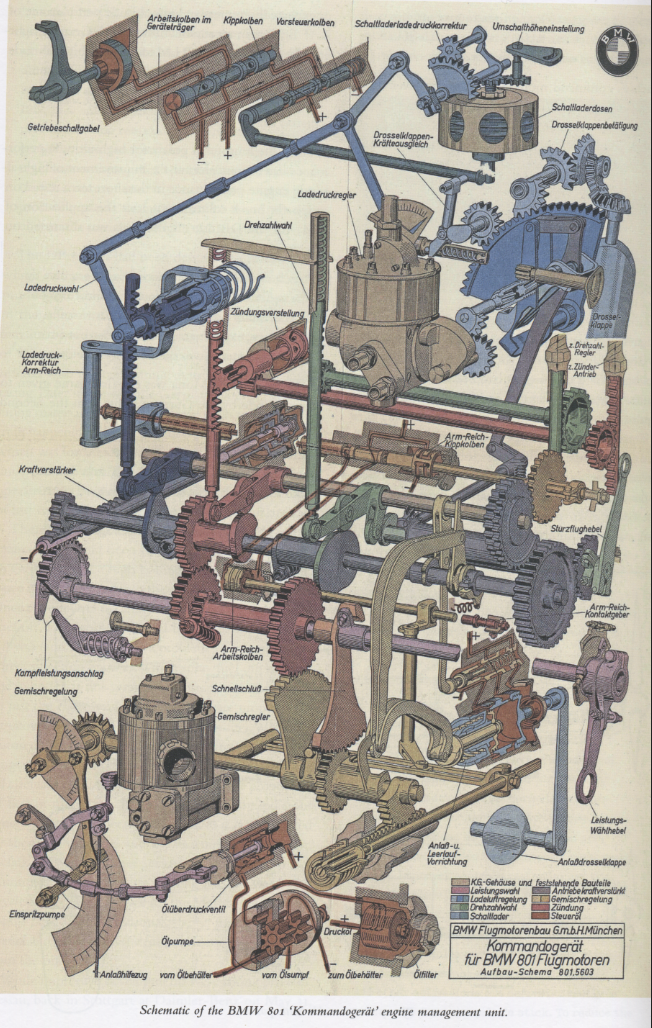 This comes to mind, too

Airborne_Again
ESKC (Uppsala/Sundbro), Sweden
vic
03
Well, the Kommandogerät, om Me 109 and FW 190. They were fuel injected, no carbs or floats in there. So when a Spit was on their heels pilots just did a minus G radical dive to get rid of them when the Spit pilot could not do this. The carb would go full rich to stoppage so he first would have to do a half roll for following the German fighters . Brits just had no Bosch company with expertise for mechanical precision injection pumps and all. And the Kommandogerät freed the pilot for flying in dogfights and not having to care for keeping the engine happy in all situations. Brings me to that other topic about “expertise” , and I mean real technical skills , not about playing labour in fancy offices – with computers or heaps of papers . . . . Vic

If you’re really interested in that kind of stuff, check out:

They also rebuilt a fully functional pulsejet. That reminds me, Klaus insists it’s not a jet engine but a rather a piston engine. Maybe something for a really, really fast homebuild SEP? Might just a tiny bit loud and getting it to minimum working speed (IIRC around 100 kts) is also a challenge…

Reminds me of my Olivetti Divisumma calculator – you wonder who on earth managed to design things like this.

Based on experience with an airframe designed by ex-WW II era Messerschmitt engineers, I can assure you that over the following 25 years they didn’t forget their propensity to embody precision manufacturing in the product…. versus creating a simple, effective design that doesn’t require it. But it’s fun to fiddle with

Actually a lot of high power pre-jet hardware was remarkable in its complexity and cost of manufacture but some of it still manages to work pretty well. A friend who is caretaker for a P-51 has recently completed a Merlin engine swap and is flying it a fair bit. I was blown away that unlike every other older UK engineered engine I’ve ever known it doesn’t leak a single drop of oil. He’s got it at Oshkosh this year, having it flown it half way across the US to get it there.

I agree entirely about the theft of the word ‘tech’ by computer people to describe their support role in instrumentation and control of real technology. It demonstrates their inward looking world view.

Well, the Gipsy engines are nicknamed the Dripsy for very good reasons.

According to Wikipedia, the pilot had a single lever power control where the Kommandogerät controlled fuel flow, propeller pitch, mixture, supercharging and ignition timing.

The cooling of the engine was complicated (and critical) enough that the cowling was as an integral part of the engine!


and found this ingenious system

Well that system is not really new. New is that has not been disclosed before

Peter, could you please share the title of that book? looks very interesting and definitely would like to have a look at it.
Thank you!

etn
EDQN, Germany
14 Posts
This thread is locked. This means you can't add a response.
Sign in to add your message