La Rochelle LFBH and its Schengen-defying 48hr PN for all non-French flights, both in and out

Just got this from the airport 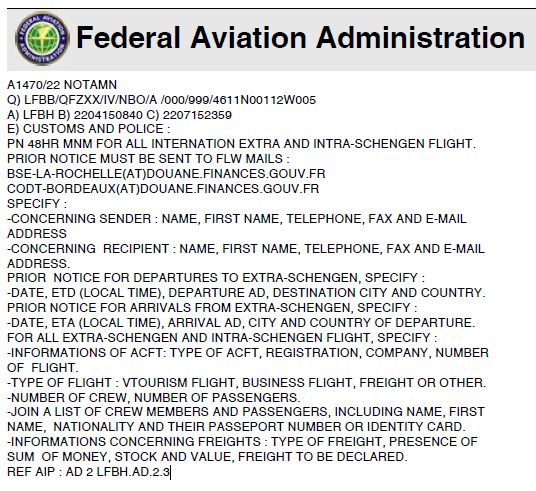 So they want 48hr PN, not 8hr PN which the AIP states

Well, they obviously don’t care if one notifies and doesn’t arrive, so one may as well do that.

From a personal point of view I would if coming from the Schengen area, just pop in to somewhere like LBFN or LFFK, then fly on to LFBH. LFFK needs French speaking and permission from the Maire to use the IAP but is no landing fee. But the AFIS speaks English.
LFBN there is a landing fee but I believe they have Avgas when someone is present.
If coming from outside Schengen, and if you cannot give 48hr notice, I believe you can ask the airport manager at LFBN if they can arrange C+ I

With such a f*cked up NOTAM, I would not be going there. Who wrote and translated that??Some things are really getting intolerable at the PPF airports in France.

My Q would be why they need 48hr PN when La Rochelle has 24/7 police for a) security and b) international airline traffic.

This is apparently just to p1ss off foreigners. And not just Brits (which would be natural these days) but actually all non-French people.

The fact that they want 48hr PN for departures also confirms this.

If I could not do this stupid PN, I would drop into Le Touquet on the way which merely wastes half an hour of my life and €35, but it is way out of the way, and France has also f*cked up all the other N French airports similarly. I guess there is Deauville?

All this will do is make everybody send in the emails

Brits are used to it anyway…

The problem with not going there is that so many nice destinations are the same now.

Otherwise, it’s 24h mandatory PN with all details and good planning (nothing difficult just after you have done it 300 time it start to feel like a pain)

I don’t think so… that’s totally illegal, especially with 9mm carrying French police. Had to get that 9mm mention in there

remember from Shengen without nothing to declare, you are legally allowed to land without PN in places without police, runway, taxiway or terminal…with no requirement to wait !

The problem of PN is specific to places like LaRochelle


I don’t think so… that’s totally illegal, especially with 9mm carrying French police. Had to get that 9mm mention in there

Extra-schengen or extra-EU, sure – but then the touch and go itself would be the illegal thing. But Intra-schengen and intra-EU, why?


then the touch and go itself would be the illegal thing. But Intra-schengen and intra-EU, why?

Of course, touch and go in non-PPF airport for intra-Shengen flights is legal without PN, it’s written black & white here…
Works better when that airport does not have AIP entry and NOTAM board

Since the demise of Flybe (even though is now back, LFBH is not one of its destinations for the moment) and since France tourist season doesn’t start until July, there are very few International flights coming into and out of La Rochelle.
AFAIK LFBH has never been 24/7. IMO this PN Notam is down to the Douaniers considering it not efficient or economical to provide a 24/7 service and not even a PN 8hrs service until July.
Foreign GA is not something LFBH relies on for its existence.

gallois
France
67 Posts
This thread is locked. This means you can't add a response.
Sign in to add your message

La Rochelle LFBH Fly-In 14/15 May 2022
Departure which is illegal per Immigration or Customs - anybody tried it?
Temporary Schengen "suspension" around Europe
How many people drop out of a fly-in (or just don't fly to that airport) if the airport requires a prior notice (PN/PNR) or prior permission (PNR)?