Forum → I Learned About Flying From That

In solid IMC suddenly I didn't know which instruments I could trust.

There I was having just taken off for a flight to revalidate my MEP/IR. I was in a DA 42 with G1000. It was an omnidirectional departure with a turn left heading 120 after take off to avoid a restricted area. I had set a SID in the G1000 fpl but that was not going to be a problem as I guessed that control would come back soon and clear me to the IAF of my destination airport. I should point out that the weather was overcast 200 ft 3000m visibility some CB’s in the region and winds 20G35 and the take off airport. The winds were from 200 with the QFU being 253° The same winds prevailed a the destination airport (although this was an immediate return journey) the QFU there was 285.
Having broken through the first layer of cloud at 2000 ft the clouds were TCU left and right light grey in colour. On the face of it they didn’t look particularly threatening. Even so when the controller came back and gave us the direct we had expected we requested to stay on the current heading until we had climbed to our assigned 4000ft so stay on the edge of the tcu to our right and figuring we would get a better view of the situation and get a feel for the TCU’s. Having done so we then took up a heading to the destination IAF. The TCU’s closed in around us
They were not particularly aggressive but we did have an 83kt headwind.(by the way this was not as forecast the wind charts showed 20kts although some higher gust at lower cloud levels)
Now surrounded by cloud in all directions with only a very occasional glimpse of the ground 1 second or so, the heading display above the HSI decided to read HDG with a cross, somewhere between orange and red over it. The AI started to turn ever so slightly so it was look at the standby AI. That was steady, straight and level although I had to constantly correct as the standby altimeter wanted to rise and fall as we encountered what glider pilots in France call “le pompe” thermals I think in the UK.
The MFD still displayed the magenta line but the little plane Icon revolved in totally different directions to the way the aircraft was actually heading and it kept rotating only stopping occasionally to give one a little hope that there was some logic to it. The PFD was now becoming a nuisance one minute the screen was covered in crosses, sometimes it had only a few crosses the next it had no crosses at all and even on occasion all looked to be working properly before something would happen for you to realise it wasn’t. This would happen in 3 to 5 second bursts.I couldn’t stop my eyes wandering to it with consequence that my new scan of standby AI standby altimeter suffered.I wished I had a piece of card or something to cover up the whole PFD but that would have created another problem as the top line of the pdf also needed to be taken into the scan as this showed bearing and distance to the next way point and the top line of the MFD seemed to work showing track and ground speed. The GPS element was actually functioning and showing the correct magenta line and sequencing of the flight plan but as I said the little aircraft symbol wasn’t pointing in the same direction as the aircraft was heading. So for any heading information it was the compass. As I very rarely use the compass to direct my flight these days I admit I kept forgetting that it turns the opposite way to a DI or HSI. With all this going on I have to admit that I was not having my finest moment in terms of all round performance. By the way I forgot to mention that we had checked on the aux and all the LRU’s were ticked as working as they should.Fortunately I had a very experienced examiner alongside me.
Now in all my IR training I was taught if you lose
primary instruments head immediately for VMC. I’m sure many of you IFR trained will have been tutting and saying exactly this if you have been reading this tale. The problem was there was no VMC that we could guarantee except for nearer the ground and we were over a hilly area, and remember that forecast OVC200.
As I said thankfully I had a very good examiner and with his help (a lot of it) I was able to use the information I trusted and had available to do the RNAV at destination followed by the missed approach that had been entered into the G1000 with a return to take off airport. The bizarre thing was that although the CDI could not be trusted it appeared that the glide slope indicators were working correctly and I was able to use the ILS to descend while desperately trying also to keep an eye on compass,track, and bearing indicators. Fortunately also, although the winds were as forecast the ceiling was a couple of hundred feet higher than forecast.
So what did I learn? Firstly to get back in the simulator and try to create some unlikely situations. The problem was that even the examiner had never come across anything like that before. Being current did not help unless you count becoming proficient again at flying on just compass or bearing track and compass.
But perhaps most useful would be to find a place on the aircraft to temporarily mount either a mobile phone or tablet (it was not my plane) and run “SkyDemon” (other software would be equally as good) but I happen to subscribe to it but only use it for VFR flying.
There were so many other things I learnt that day, far too many to write up but the first 2 about cover it.

We still don’t know what has caused the problem and the engineer is baffled, he has swapped out various units and in fact all seemed to work at one point but 30 minutes later it failed again and so we wait.

Sounds like your ahrs failed. Is there a backup with a reversion switch?

The engineer has tried changing it and same problem. I don’t know about a reversion switch, I have never been introduced to one.The computer shows that all is working properly. They thought at first is was the :Vannes de Flux I’m sorry I’m on one of those rare trains at the moment thanks to strikes and can’t look up the English of even if I got the French exact
The problem is each time they try something everything seems to work then you fire up to go for a test flight and it fails again when it feels like it.

I don’t think there is way to stay ahead of it in IMC of without a well functioning DG, partial panel on compass is only useful to fly straight and level toward VMC

For the issue it is alywas good to get a screenshot of PFD screen and error message after pressing soft keys while in flight if is safe? or after landing? I got an AHRS fail (turn out to be fluxgate connection issue), it was not sporty as yours (happended when I was VMC above but weather was improving really well ahead), I got the same GPS working well but aircraft symbol fiddling around while flying but enough for me to switch to tablet: 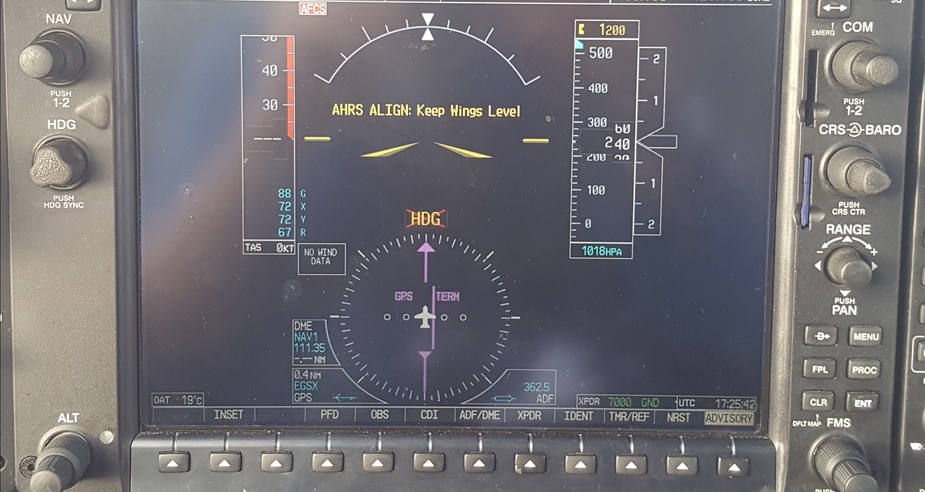 This would happen in 3 to 5 second bursts.I couldn’t stop my eyes wandering to it with consequence that my new scan of standby AI standby altimeter suffered.I wished I had a piece of card or something to cover up the whole PFD but that would have created another problem as the top line of the pdf also needed to be taken into the scan as this showed bearing and distance to the next way point and the top line of the MFD seemed to work showing track and ground speed.

Wouldn’t it have been a help to pull the circuit breaker to put the whole pfd out of service (black) to avoid the distraction?

Why did you decide to go missed at the destination instead of completing the approach and figure things out safely on the ground?
Or did the meteorological conditions force you to in the first place?

“Wouldn’t it have been a help to pull the circuit breaker to put the whole pfd out of service (black) to avoid the distraction?”

Yes if it is not working properly and causing distraction then just switch it off (stops you from trying to debug it and human factor it means: just let it go, but easier to say on the ground

I was told the “training practice” of pulling CB for partial pannel practice was probably the cause of the G1000 glitch I got while flying for real, I was not sure if this is true? or blame on me or someone else

I was told the “training practice” of pulling CB for partial pannel practice was probably the cause of the G1000 glitch I got while flying for real, I was not sure if this is true?

Pulling CB (PFD and MFD) is done regularly when upgrading NAV database, so it can’t cause any G1000 glitch – I guess it’s a myth generated when someone wasn’t able to fix some G1000 problem.

Emir
LDZA LDVA, Croatia
29 Posts
This thread is locked. This means you can't add a response.
Sign in to add your message

NDB Continuation - an abuse of power?
Getting the "leans"...
IFR "War Stories"
I don't get RVs