Why is aviation so full of persnickety characters?

… and why are they so hard to ignore?

There is a few things that reoccur in all forums and bar conversations all the time – discussion about the ins and outs of rules, and how things should be done.

We appear, to the outsider, a community obsessed with minutiae, instead of enjoying flying, and educate people to be in fear of being lectured by their fellow pilots, instead of seeking their advice.

Perhaps one reason why GA is declining…

I think the part of the problem is the link or lack of link between theory, training, reality and experience.

During training, especially training in some commercial schools there is almost literally a procedure for every scenario and this means that the idea of something not being allowed because it is not specifically mentioned is almost true.

The next problem is that in training most things tend to go to plan and idealisms are taught.

Then there is the person who has been taught but has little experience or a confined experience and they don’t know any better from what they were taught.

Then these same people start teaching new people, reinforcing the mantra even more.

I believed the training I had to be good, and for training it WAS good I believe. The problem is that it does little to prepare for reality, and only when you start to go out and do things yourself (often in at the deep end) does it become obvious that there are plenty of things that rules don’t cover, and this leads you to use common sense, and when that common sense (or airmanship perhaps?) develops then you are able to apply it to more circumstances.

For this reason I notice when I am at work (airline F/O) there is a big difference between the captain who has only done this one job for this one company and is fairly new as a captain compared to the older more experienced captain. The first one will say many more times “where does it say we can do that” when the older captain will say “sounds like a plan”

The problem is that the attitude filters down and people will believe it all. Especially when the people with limited experience start teaching/instructing themselves which unfortunately is the way it seems to happen (in EASA land anyway).

That came out as a fairly commercial sided post but I don’t believe it just applies to that – the same thing will apply to GA too. A prime example of this is the UK IMC rating or IR(R) where people will passionately argue that it is an emergency only rating never to be used whenever it can be used fully and bring many advantages with it. Likewise people will argue and say that you can’t fly approaches down to approach minima because there are ‘suggested’ minima in the syllabus for it (can’t remember what they are now, something like 500ft for ILS and 600 for non precision). It’s this person that will often not use common sense to see that the pilot using the IMC rating every week is FAR safer flying an ILS to 200’ than the pilot with the full IR who last flew an ILS when he revalidated the rating months before.

I had one of these on Reddit’s /r/flying the other day (who was also arguing the EASA approach was much superior to the more practical approach that FAA takes to pilot ratings). It’s the first time I’ve encountered it, everyone I know who got the IMC rating got it to actually use it (not as some “emergency” thing). It was a student pilot saying this, too!

With GA having friends like this, who needs enemies?

Indeed… the regulators are usually much more relaxed than what we would have if some GA-forum pilots ran them.

Also the activity is partly self selecting on character profile, and the mountain of rules ensures that people never run out of discussion topics

You also get some really funny character types. For example I know two people who run diametrically opposite personas in two forums. In one (behind a paywall) they post verbosely and politely; in the other (which is not the same forum for both, but both of these are free sites) they do the opposite, and one of them really gets his boxing gloves on. I think some people have way too much time on their hands. Yet, both of these people have known jobs which should keem them fairly busy.

Reddit must be a great site if you want to beat somebody up and then disappear under the waves, until the next time you are having a bad day.


We appear, to the outsider, a community obsessed with minutiae, instead of enjoying flying, and educate people to be in fear of being lectured by their fellow pilots, instead of seeking their advice.

I think it’s the same everywhere. There are all kinds of rules and regulations to how the area outside of schools shall be. All larger toys shall be “approved”, the sand shall be of a certain quality in case some fall down, no toy shall be higher than 2.5 meters or whatever it was. The principal literally said f*ck it! What happened was that we, the parents, made all the toys, because those rules didn’t apply to stuff the parents made themselves. He also got the perimeter extended to include large chunks of forest with 20 m high trees, a stream etc for the children to play in, because the rules did not apply to nature.

Yes, disappear under the waves of downvotes :-)

I have decided that I dont think it is unique to pilots. I take an interest in sailing and their forum attract exactly the same type of contributions. I also have a couple of other interests (although I find myself following their sites less frequently) and there is no difference. I think these boards attract a similiar mix of contributors whatever the subject matter.

I think that Peter is partly right that some are simply frustrated hobbyists whatever the hobby. I was reading an interesting discussion about Blue Water sailing recently and one contributor got quite excited. Eventually he was called on to set out his experience – which he appeared happy to do at length. In reality he had done a reasonable amount of coastal sailing in relatively small boats and clearly believed he was very experienced. In fact his experience was so far removed from the topic of discussion that it was very difficult to see why he felt he had the knowledge to lecture other contributors. As is so often true in life those who have the least to say or are the most humble are the ones to listen to.

I saw this somewhere else the other day, and thought it apropos: 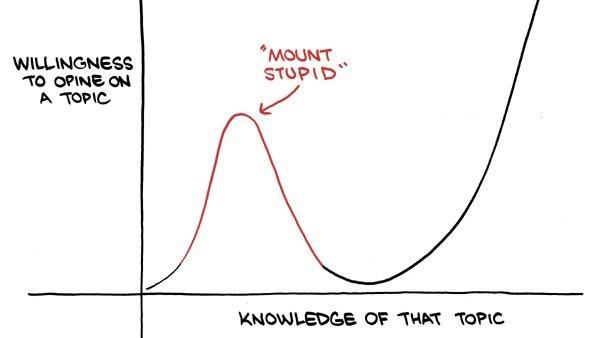 
People who make up rules where there aren’t any

Make up rules, I don’t know. I rather think that a lot of people get told something by the FI’s or pick it up in a forum or two and then believe it to be fact. With the complexity of the rulemaking we do have today and the lack of simple and understandable interpretation of the actual rules in force, it is not at all surprising when people start to interpret them in the way they understood them. Which can be massively diverse. The answer to that would be rulemaking that a normal person can understand without having to consult a lawyer.

Probably because that is how most CAA’s operate. And consequently the fear of retribution is instilled in most pilots at student level.


People who interpret all rules in the most restrictive fashion

See above. That is what most CAA’s do, that is what most companies do these days, therefore restricting themselfs even more than they are already restricted. The consequence is that people will start to interpret all rules in the most conservative fashion to cover their backsides.


People who argue strongly for stuff to be “mandatory”

Those people only show that in many regards we have the rulemaking that most people are often unwittingly asking for. And that is not limited to aviation at all. It’s a simple human reflex to demand that anything which disturbs them to be forbidden while whatever they want to do should be allowed. That is why we do have the regulation hell we have today. Regulations in many regards are the sum of all fears of the members of the legislative.


We appear, to the outsider, a community obsessed with minutiae, instead of enjoying flying, and educate people to be in fear of being lectured by their fellow pilots, instead of seeking their advice.

Unfortunately that is the consequence, yes, and not only in aviation. ANY forum is like that in one way or the other.

You get those who need advice and those who (think they) know and give advise. And if the advisors are not of the same opinion, they will start to fight each other. The advice seeker will eventually throw up his arms and leave as he simply realizes that it’s impossible to figure out which opinion is correct.

Absolutely, and I think I need to put that hat on myself as well. Flying is a very time consuming hobby and most employees simply do not have the time for it but refuse to admit it. Clearly this causes frustration. But at the same time, visiting fora and talking to fellow aviators may well be the only thing we do have time for between work and home comitments, I reckon without having that community, people would simply resign and quit altogether.

Mooney_Driver
LSZH, Switzerland
98 Posts
This thread is locked. This means you can't add a response.
Sign in to add your message

Tail numbers or Aircraft ID that start with F, G, and I
Testing "exotic" characters
Chocolate Hills - My First Aviation Themed Novel
The FAA Common Purpose cost sharing rule, and does it apply outside the USA?