Russian war in the Ukraine

Although the effect of the western propaganda machine is extremely effective, I am quite surprised by the huge misunderstanding on how we got here and the total blackout on how the Russian side thinks, feels, and sees things.

I’m curious. What misunderstanding? What western propaganda? What is the benefit for the general Russian population from this mess? The hundreds of thousands that have left Russia are as interested to know your answers as we are.

The 300k reservists which Putin is sending in are not going to last very long, at the current rate of attrition 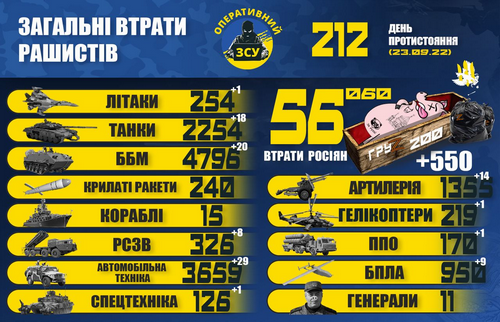 The personnel loss numbers have been confirmed by Russia, in document showing compensation paid to ~8k families per month. But current numbers are rising, due to the Ukrainian offensive and better weapons.

We are essentially fighting the US’s War against Russia

The West has no “war against Russia”. It would be perfectly happy to have Russia there, contained within its borders like every normal country is. There is absolutely zero interest in attacking or invading Russia.

Sure they will do the fake referendums. Easy, because most of the population has left the two regions in question, leaving just pro Russian fighters and a % of pro Russian people.

how the rest of the world does not share our general sentiment.

That was always the case. In WW2, most of the earth’s surface carried on as normal. And any smart arms dealer sells to both sides


The West has no “war against Russia”. It would be perfectly happy to have Russia there, contained within its borders like every normal country is. There is absolutely zero interest in attacking or invading Russia.

Unfortunately we do, although not yet a shooting war. Ukraine is fighting the war for us, because if they lose there is no telling where it would stop. The Baltic states would be high on Putin’s list. Finland and Poland not far below.

Of course “the west” has no interest in the Russian territory but that’s a different thing.

has no interest in the Russian territory but that’s a different thing.

It is not different from the Russian population POV, because the “threat of an attack / invasion by the capitalists / imperialists” is a cornerstone of communist ideology, fed to the masses. I know, having lived in Czechoslovakia. To make the population support the govt of a totalitarian State (which is pretty essential in Russia because the police and armed forces cannot alone subdue large numbers of angry people) you have to create a bogeyman.

It’s like the Albanian bunkers. We had the same thing in CZ but underneath the apartment blocks.

It is of course totally fake because the West would never attack / invade Russia / USSR.

Whether supporting Ukraine also usefully damages the Russian military machine, is a secondary benefit, but Russia can end this and rebuild its military, anytime. They can buy chips and such from China.

This is not to say it is easy for Ukraine. It is after all former USSR, and communism/socialism loves lazy people. And lazy people always vote for the status quo. It takes a lot to break away from this. Most Ukrainians have done it but a lot have not and never will, especially in the east. If Ukraine manages the regain the eastern regions, and Crimea, these people will probably be a permanent 5th column, or will leave and live in Russia (unlikely since Russia is a sh1thole compared to anywhere in Ukraine). Russia has anyway already kidnapped 1-1.5M people from Ukraine… think about that.

The Baltic states would be high on Putin’s list. Finland and Poland not far below.

That will never happen. Look at the state of the Russian armed forces.

Heard in the news this morning that Russian police is collecting “volunteers” for the army. People in prison for demonstrating against the war are given contracts to sign to fight in Ukraine. No training and no motivation whatsoever (for obvious reasons). If they don’t sign it’s prison for at least 10 years. The Russian military forces, the police, the entire country is clearly completely insane. How long before it simply disintegrate? That is probably the real danger, what will rise out of the ashes?

Not sure how you arrived at this estimate. Having grown up in Russia, I know a lot of people who are there now (friends and relatives), of course my selection is by no means representative, but 80% supporters sounds way off to me. If you define “active supporters” as someone who will openly express their support for the government policies, then I believe the number of those is about 10%. Maybe another 10% are actively against the government but they are actively silenced. The remaining 80% don’t have their own opinion on anything going on in politics and will simply go with the flow (“lazy people” as you said).

That’s probably about right. Most in Russia will silently support the govt.

Active anti-regime people will only ever be a few % at most.

But much depends on the general level of law and order prevailing at the time. As soon as things loosen up and the hordes smell blood, they are encouraged. All the time there is tight control, almost nobody will stick their neck out.

AIUI, a pro-Putin referendum in Luhansk and Donetsk is pretty well guaranteed, due to a) historical percentages and b) most people having left.

Even in Russia, there is majority support. Even if 15k body bags come back from Ukraine daily, that’s only a small % of Russian families affected.


That will never happen.

Never say never. You got an increasingly frustrated and quite possibly scared guy in Moscow who knows exactly how his country treats loosers. Anyone in a corner is a dangerous guy and this one particularly. I would not be surprised if he throws a couple of tactical nukes just to make the point: Piss me off some more and I’ll dust of the big ones. As a matter of fact, I wonder why he has not yet done that, particularly in the beginning in February when everyone was really frantic. Never underestimate an opponent. Napoleon did and so did Hitler. The Russians had both of them for Breakfast.

The reason I am sure he won’t use nukes is because he will lose control of the agenda.


That will never happen. Look at the state of the Russian armed forces.

Yes, but that is because the west supported Ukraine. Otherwise we would see a very different story.

Airborne_Again
ESKC (Uppsala/Sundbro), Sweden
1283 Posts
This thread is locked. This means you can't add a response.
Sign in to add your message