I agree that taking off cylinders, just to have a look inside to make there is a camshaft there

would be pretty bad.

Check all the aircraft sales websites; they also occasionally advertise engines. Reims Rockets are popular especially in Poland, so look there.


Also I don’t want to register it in different country, because communication with foreign CAA every year, with anything, like AMP change, ARC issuing, will be not very comfortable.

With the changes of the recent years, there does not necessarily have to be any annual comunication with the CAA anymore. Many people have aircraft in countries whose languages they don’t speak. Many CAAs will also communicate in English.

But you know, every national authority can have slightly different requirements.

You know, they absolutely can’t.

What you are doing is an EASA to EASA registration change. 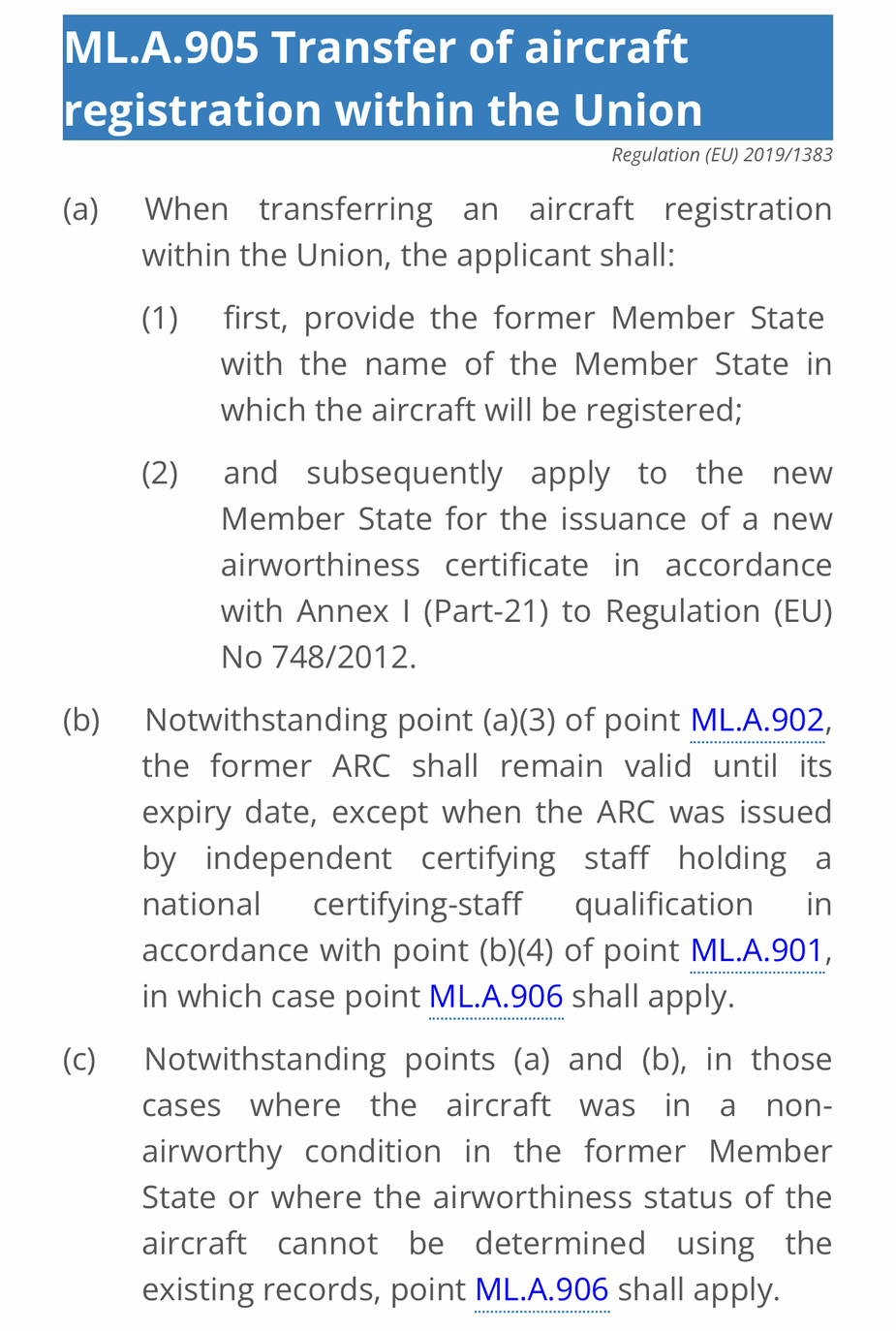 Last time I did check few years ago over here they would take the engine apart and inspect all parts for cracks. So financially it came very close to a sudden stop inspection and no way to do it on the airframe. How much do they want to charge you for that inspection?

What is the goal of the local CAA? An aircraft with its original engine will never have a Form 1 for the engine. or any other parts fitted during production. Do they want some inspection carried out? Are the unsure about part serial numbers and their origin and want a Form 1 for that reason? I remember some CAA caused problems when you tried to put an engine over TBO on their register. You could run past TBO when on the register but not transfer to the CAA when already over TBO. Is that somehow the case?


But this is not no.1 option for me, because every maintenance like that – disassembly, hurts engine.

If you distrust the engine shop to this extent, then I understand your concern, but frankly a good running engine in capable hands should not really suffer from this.

My engine was just given a sudden stoppage inspection and I trust the shop who did it (they also overhauled it a couple of years ago). Otherwise I’d be in the same situation: ALL my cylinders were off at some point and actually the crankcase replaced. But now the engine is good to go for at least 12 years again plus the remainder of the 2000 hrs plus on condition it was overhauled to do. A capable engine shop should be able what you need to do without too much ado and also do a good enough analysis of the engine to see if it has any hidden faults which the “lost” documents would hide.

On the other side: What the heck happened to the documents anyway? And when did you learn they were missing? IMHO it is a massive problem to deal with, as not only did it land you in the problems you have now but it also will scare away any buyer if you should resell it. So I’d get on the back of the guy who sold it to you and he has to find the docs, otherwise I’d put the whole deal in question.


What is the goal of the local CAA?

The local CAA wants to know what the engine times and so on are in order to issue the C of A and without documents that engine is a white sheet of paper. It can be anything virtually.

Actually, from the maintenance log of the airplane, it should be clear when the engine was installed and under what conditions, so the engine hours should be discernable from there. Also the airplane log would most probably show any major repairs done since that installation, with the details and workreports being in the lost engine books. If the engine is indeed factory newly installed into the airplane, it would therefore be easy to at least get the hours.

IMHO, what the CAA is seeing is that there is an engine without logs, therefore they do not wish to take responsibility for issuing a C of A without someone else saying that the engine is airworthy. That is really all that is to it. And in more than one way I can understand the OP that he kind of shares the concern that he does not want to operate an engine which he has no details of. So what is left to do is either to get a capable engine shop to analyze and test the engine, produce new docs for it and release it or he really has to be on the lookout for a replacement engine. One problem I’d see there is, even if he finds a replacement engine, he can not even sell the other one, servicable as it may be, without docs.

An aircraft manufacturer either discards all component documentation, or files it somewhere from where it will never come out. So if you buy a plane containing Part X, fitted when new, you will never get any paperwork for Part X. The aircraft was released under the TC holder’s authority (usually they are EASA 145, plus EASA 21, also) and that means they are authorised to release the whole aircraft without having to prove anything about what it contains. Even if they can find the form they will never give it to you. Of course this also incidentally prevents parts appearing too readily on the used market, with paperwork, which is all good business for the recertification business of Part 145 companies, so everybody has their fingers in the pie

It is completely dumb to dismantle an engine just so you can switch on the laser printer and print off a Form 1 but that is how the certification system works. Well, in Europe. In the US this situation would not arise in the first place (in Part 91 GA; it has arisen in the airline world) for a number of reasons.

Snoopy may well be right that the Czech CAA is playing some dumb game, too. These things do happen; more so if the owner has his back to a wall. I recall a case of a 1972 Robin which had some tail strobe, and a company in NL refused to do an Annual on it, claiming the tail strobe was fitted illegally, despite the owner having a 1972 letter from the factory mentioning this tail strobe. Or something similar; it was posted here a few years ago. Basically the owner got totally shafted into a corner and due to various factors the plane was eventually abandoned. It is now worth scrap; probably less than zero since the said company put in a hangarage bill comfortably exceeding its value…

I agree it is completely dumb to even pull a cylinder. The most dangerous time for any engine is when it operates between 0- 400 hours after it is new, after a rebuild or major work.

Probably the safest time is 1000-2,500 hours but people keep killing engines after 2,000 hours so never find out. They then get the engine rebuilt and operate a far more dangerous engine.

All of this is irrelevant for an EASA to EASA transfer. If the plane was airworthy before the transfer the new NAA shall not question it.

One pilot I know did a D to G, well before brexit, and when the UK CAA went through the various STCs applied they found a mistake had been made by an avionics shop in DE. Not a small mistake but basically one which probably halved the value of the plane. Obviously, details were never posted, the plane was sold at 0.99c (where c is the speed of light), and that was it.

The importing CAA may not be entitled to examine the paperwork on an EU-EU registry transfer, but in reality they do, and you are in a corner because you will have de-registered the plane at the point where you find out there is a problem, so you can’t fly it.

I think the way this works is that they are required to accept the reg, but you can’t stop some official checking the papers, and once they know the exporting reg is an invalid status, then obviously they are not going to accept it. No EU law can force an accepting CAA to accept a plane which is unairworthy. If that was possible, then you could do whatever illegal mod you wanted, do a reg transfer, and the mod would be legalised – because all mods are legalised on a registry transfer.

Not suggesting the OP’s plane is unairworthy but there may be something the Czechs don’t like, and you can expect them to tell an accepting CAA about it, which at best will stir up trouble.


It is completely dumb to dismantle an engine just so you can switch on the laser printer and print off a Form 1 but that is how the certification system works.

No, it is not! You are assuming that the engine is in perfectly fine condition and should be operated as it is. And if you can actually prove that, there would not be the problem discussed here. It might well be the case with this specific airplane.

The story, however, could be told completely different as well: We have an airplane with no engine documentation. Not a missing form 1 but obviously no documentation at all. The only thing we know is that it is not the original engine the airplane was delivered with. So at some point in the past somebody glued another engine into this plane. We do not know where this engine is coming from – not if it has been factory new or if it has been taken from a crashed airplane.

If in such situation the CAA would not ask for a form 1 (or another means of compliance with regulation regarding equipment installed in aircraft), we could drop such requirements at all.
Shock loading inspection? Why bother – just throw away the logs and pretend it’s a perfectly fine engine…
Certified repair and maintenance shops? Why spend the money – just fix the plane in the backyard and burn the logs.

I’m not implying that anything of this has happened in this specific case – just illustrating why not asking for a form 1 would render the entire system of “certified” airplanes useless.


If the plane was airworthy before the transfer the new NAA shall not question it.

That’s the whole problem here: The (new?) owner obviously can not prove that the airplane has been airworthy before the transfer…

Malibuflyer
Germany
79 Posts
This thread is locked. This means you can't add a response.
Sign in to add your message