On the flip side, if people choose to wear a mask, they should not be attacked for it (verbally or physically). Many of those who would attack a mask wearer, when asked, say it’s “freedom” not to wear a mask. By the same token, it is freedom to be able to wear a mask and not be attacked for it. Similarly, it’s disingenuous to argue that businesses should be free to admit or deny whatever customers they want (usually in the context of denying service to kinds of people that the individual concerned doesn’t like) and then get upset when the same business exercises its freedom to require a mask, any more than if the business says “No shirt, no shoes, no service” (a common sign in the conservative south US). If a person doesn’t like it, they are free not to patronise that business. Making physical or verbal attacks against the business/owner is not on.

I’m not aware of any physical or verbal attacks. Most people are just getting on with things.

One of the better signs on this subject was in the local branch of Toolstation (for the non-UK, a 50% trade and 50% retail catalogue/counter shop for hardware and tools) which simply said “Please respect the individual choice of customers and staff to wear, or not wear, a mask”.

Laws vary from country to country, but many people seem unaware that just about any business in the UK is free to accept/decline customers based on any factor they want (apart from protected ones, e.g. race, gender, sexuality). In particular, establishments licensed for the sale of alcohol are free to exclude anyone they want without giving a reason.

Yes; that is the logical consequence of the UK not having ID cards

Covid resurgence in Iceland – restrictions return. To me, Iceland seems to be more logical and fact-based than most countries.
https://www.icelandreview.com/news/government-announces-new-social-restrictions/


Please respect the individual choice of customers and staff to wear, or not wear, a mask


To me, Iceland seems to be more logical and fact-based than most countries.

Maybe. But quite a few of the measures look like to be of the “something must be done” variety. For example closing restaurants at 11pm. Seriously? And the number of interactions of people attending events with more than 500 people is miniscule compared to everyday contact.

I feel the most logical and effective thing would be mass deployment of cheap test kits, and nicely asking everybody to test themselves daily for a period like two weeks. Independent of supposed immunity status etc. At least in a country like Iceland I could see that working.

That’s what the UK has been doing for some time. Unlimited supply of free kits.

Lots of people I know use them regularly. I’ve tested myself several times in the last few weeks. A guy I work with one day a week (he has another job the other 4 days, and I am pretty sure there is a bunch of anti-vaccers there because it is in Brighton which is quite “trendy/left/fashionable”) tests himself every 2 days.

The UK has now settled to a certain level of infected people, around 1% but this seems to be heavily concentrated among those with kids in the house, and some other groups which are anti-vacc, and ~200 deaths/day which the media is bored with, so that is fine

This is still amazing 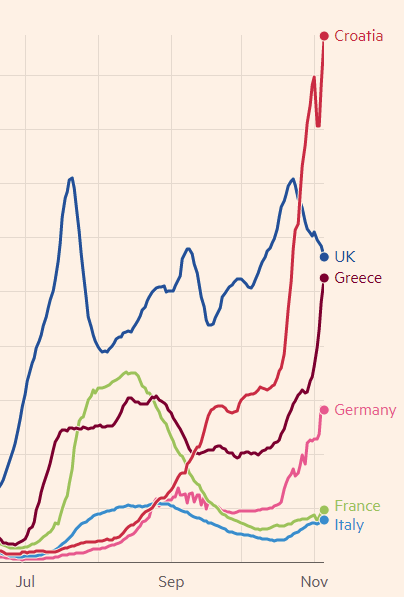 What does Croatia have in common with Greece?

You might want to add a few countries to this graph. The situation is as dire in Austria as well and quite a few others will be going the same way.

I’ve lost count but I think it is still the 4th wave, but it could be the 5th? In any case, Covid has now, with the help of the anti vaxxes and tinfoil hat brigade, outdone the Spanish flu in terms of waves.

Unless the readiness for vaccination changes, I see no perspective for this to change for many years to come.

I am looking anxiously at the vote coming up in Switzerland regarding the Covid Certificate and some other measures. It will be a massive problem if it gets rejected, as it would mean Swiss people would no longer get access to Covid Certificates, could no longer use the European Covid certificate infrastructure (which they helped develop!) and would practically be prisoners in their own country as travel without a valid certificate is practically impossible. Also, if the certificate requirements get dumped, Switzerland will become a Covid hotspot yet again. Let’s hope reason prevails.

Let’s get this clear I am double vaxxed and I am pretty well informed. I doubt I will get the “booster” as I am very worried about the Government coercion and the “one truth” with no debate being propagated. I would be far more likely if we were given proper information. I am totally uncomfortable about the Government vaxxing young kids.

The latest curves of the Vaccine’s effectiveness shows that the Viral load over the first few days (when you are shedding and can pass it on) is exactly the same between the unvaxxed and vaxxed.

I wish I could find the curve published – it was in a medical publication and I will post it later. The result means if you are vaxxed you get less sick but there is no difference passing it on.

What will probably happen is everybody will get this, there will be wave after wave and countries that suppress this like Australia will have this badly for another 5 years. In 5 years time, their population would have aged 5 years and their 80 year olds will be more at risk. The area under the curve will probably be exactly the same in virtually all countries. There is a certain “stock” of vulnerable people. These people get hit and we eventually get herd immunity and people will get infected from time to time. They will have cold like symptoms. The Anti-virals coming out now along with better treatment (the steroids) will help those badly hit.

The counties that have had it badly like the UK will hopefully just get it out of the way. The UK is falling quite rapidly and we are going into the Winter

Is there any proof that once you’ve had it you are unlikely to get it again? Or is that opinion.
@Archer-181 says he is uncomfortable about giving vaccines to children. But haven’t children always had vaccines when they have become available. Measles, mumps, tetanus, tuberculosis, polio (before it becames a sugar cube, but I suppose it’s still a vaccine) rubella, and smallpox.
Funnily enough I was talking with a bunch of friends mixed French and Brits and all in our troisième age. The subject of vaccines came up and we all still had that funny shaped scar that came from, now I may be wrong, it’s a long time ago, the tuberculosis jab.

gallois
France
10000 Posts
This thread is locked. This means you can't add a response.
Sign in to add your message