Err, AFAIK, he was fined by French customs. Dutch customs wouldn‘t make sense if it happened in
France. Also, AFAIK, it was about the arrival, not the departure.

Thanks for clarifying that bit, now it makes sense (version I heard was bogus)

In any case, he still does not seem to understand that ATC flightplan and customs/immigration PNR are two separate things…. 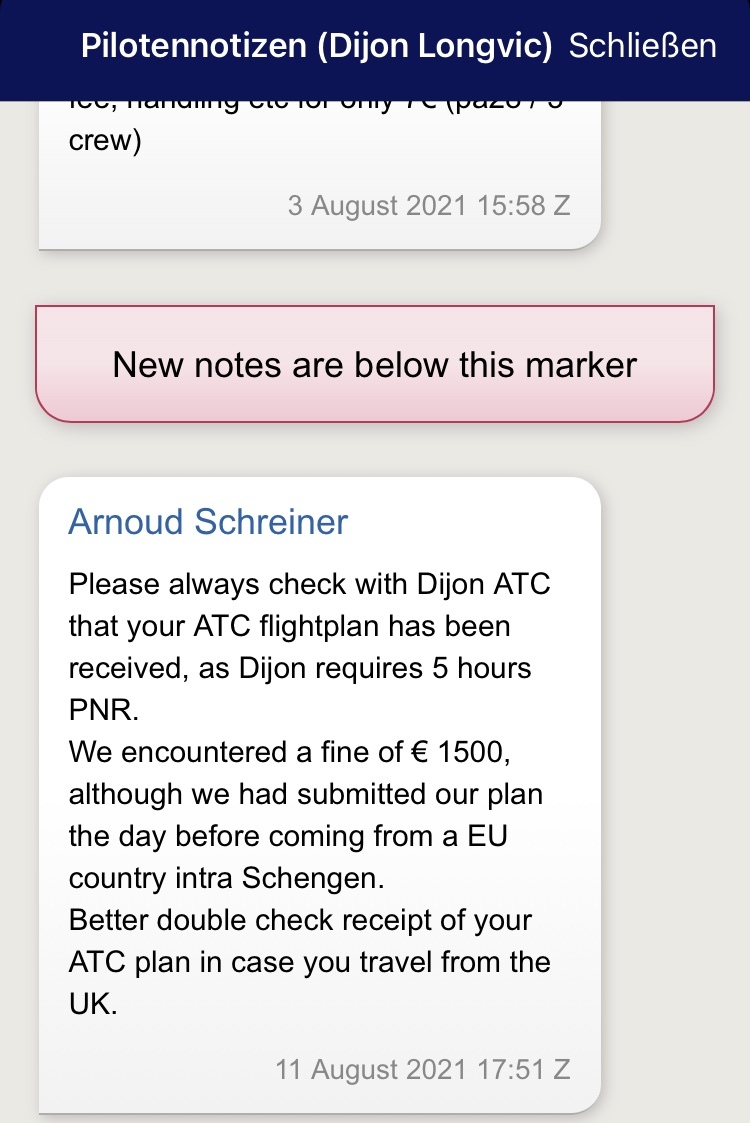 
In any case, he still does not seem to understand that ATC flightplan and customs/immigration PNR are two separate things….

Completely clueless… It’s simply unbelievable that a pilot doesn’t distinguish between ATC, airport authorities and customs/immigration. Has he ever tried to pay landing fee to ATC or to customs?

Since France has lost any interest in the Schengen treaty, maybe they should leave. A six-month “temporary” reïnstatement of border control followed by another six months, followed by…


Completely clueless… It’s simply unbelievable that a pilot doesn’t distinguish between ATC, airport authorities and customs/immigration. Has he ever tried to pay landing fee to ATC or to customs?

In all fairness, you know that none of this is being even remotely taught in the PPL “course”.

Plus, in the case of LFSD, the airport, like many other French ones, didn’t even bother to issue a NOTAM to say that the PN requirement set out in the AIP entry for LFSD now also applies to flights within the EU/Schengen zone. It’s tough.


Since France has lost any interest in the Schengen treaty, maybe they should leave. A six-month “temporary” reïnstatement of border control followed by another six months, followed by…

This is the theory though, as Bosco states, there is nothing stopping you to fly legally (as you would drive a car) from any country in the Schengen zone to any airfield in France (uncontrolled) without any special requirement. I do it all the time, never get checked, asked questions or bothered in the least…

Then what has changed ?

Also since when has filing a flight plan served the notice for PNR? 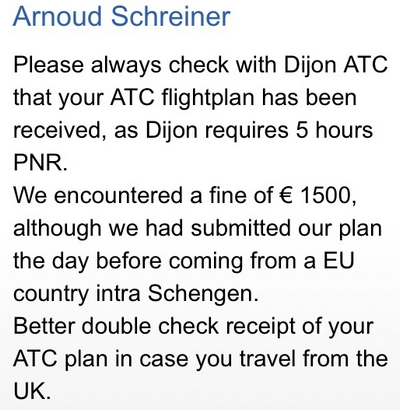 The only airport that ever actually told me that was Prague LKPR. Ai airports generally, union / job demarcation / job protection rules are in place to ensure that staff seeing the FP does not communicate the information to OPS staff who want to receive the PN. I remember a hilarious one from Padova, Italy, where they actually directly told me that the guy will not walk the 5m, on principle

However, most of the time these stories, posted on certain sites (facebook, or some private whatsapp group?) are 50% of what actually happened. The other half turns out to be some action by the pilot which he has not disclosed. I heard one such only yesterday; still awaiting full details. Like one chap who, from vague memory, got a €500 fine at Megara, Greece, due to Customs noncompliance (it is not a port of entry) but actually he landed after airport closing time. Well, if I landed at Shoreham after closing time, I might get a bill for £1000 for overtime for everybody working there (a figure from another vague memory of somebody actually doing it, many years ago, and probably not true today).


Then what has changed ?

The fact they are ALLOWED to put a control in place. Doesn’t mean there is one, but there could be one. If they decide to show up and check, they can.

LFHNflightstudent
LFHN - Bellegarde - Vouvray France
523 Posts
This thread is locked. This means you can't add a response.
Sign in to add your message

Flying and Russian citizenship (Ukraine war related sanctions)
La Rochelle LFBH and its Schengen-defying 48hr PN for all non-French flights, both in and out
How many people drop out of a fly-in (or just don't fly to that airport) if the airport requires a prior notice (PN/PNR) or prior permission (PNR)?
National CAA policies around Europe on busting pilots who bust controlled airspace (and danger areas)