Cessna 182 RG down near Samos


“Bodies recovered with the aid of divers”, so the wreck is accessible and recoverable.

Looks like it. That should help if they are trying to recover it.

Also looks like the accident site is much closer to Samos than originally posted on ASN and other sites. If they were seen by islanders and also one paper reported the crash site being a few miles south of the coast only, that implies that the last positon recorded on FR24 is not at all where the plane came down.

There is a picture posted on Twitter showing the oil contamination at Haifa before the accident flight. It is reposted on ASN. This definitly looks like a forgotten oil cap to me. Anything else would have most definitly precluded any attempt to continue flying. 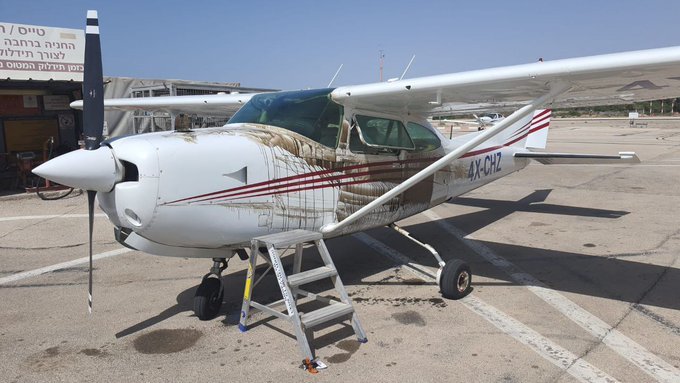 Im not sure how these data are created, but if there is any truth to this vertical speed it could look like loss of control.

There just has to be a story behind this, because only somebody completely mad would fly a plane with such an oil leak.

OTOH if Mossad was after him, he would have never left his house…


There just has to be a story behind this, because only somebody completely mad would fly a plane with such an oil leak.

Incidently I have seen something like this before, years ago. The reason for it was simple: They refilled oil and did not tighten the cap, so it became loose and opened eventuelly. Looked the same. Obviously, it required a massive cleaning of the engine before they could fly again.

Here? I am almost sure same thing. The oil cap let go probably near Haifa and he landed to see the mess. But hey, he had a schedule to meet e.t.c. so refilled the oil, cleaned what he could and left. In this case there was nothing wrong with the engine, even if most probably there was some smoke of the oil remnants in the engine compartment for a while.

For this to be the reason of the accident, there is one major factor which makes me believe it isn’t: The plane flew for 4.5 hours after this spill absolutely normally. If the oil leak was the reason or even the not cleaning, I would expect a fire or something to start MUCH earlier, say after take off or within 15 minutes or so. Not after 4.5 hours.

Looking at some accidents of more pedestrian nature (that is without a prominent victim which might have been in the way of someone) we have seen this so many times: People have a trip and a schedule and therefore disregard obvious No-Go’s on the way. Doesn’t take the Mossad or whoever for that. They were on the way to Skopje by the sound of it (Samos was intended to be a fuel stop) and they were running late probably (due to the oil leak), ended up at night and then got in trouble short of Samos. Why needs to be found out. What if they forgot to fuel as a consequence of the mess?


Im not sure how these data are created, but if there is any truth to this vertical speed it could look like loss of control.

Fire on board could easily do that. Look at SR111. They impacted the ocean vertical.

However, FR24 data is notoriously unreliable for this kind of thing, particularly in extreme situations. For starters, FR looses contact a pretty long way off the actual crash site. This could be because of no coverage or because they switched off the transponder (in fire you keep only the most necessary if any equippment) or for whatever other reason the last return is not where they crashed. It is not unknown in FR to get positions even AFTER a crash occurred, as FR simply continues to calculate for a while if a signal is lost (or was at the time of MH17 for instance, where initially the track continued some 50 miles beyond the crash site!)

This kind of rate of descent could be true but could also be a calculation mistake. I treat this kind of data very carefully and with a bucket of salt.

Were they VFR or IFR? initial altitude looks low for flying in those corners, probably VFR? but navigation looks IFR or on auto-pilot?

Any obvious reason why they suddenly climbed FL120 in last part after Rodos before the crash? does Greece allow NVFR arrivals on their airports or airspace? or it’s “IFR only” after SS+30min?

It is a very good point about leaving the dipstick unscrewed, and an innocent explanation for all the oil. It’s been done before; one former “resident” here did it in a piston twin.


Were they VFR or IFR? initial altitude looks low for flying in those corners, probably VFR? but navigation looks IFR or on auto-pilot?


Any obvious reason why they suddenly climbed FL120 in last part after Rodos before the crash?

It has been suggested the head wind was less up there.

Also as the plane gets lighter, you can climb higher. Step climbs are not really something many people do in GA but that does not mean they don’t make sense at times. I don’t have figures for the C172RG but I would not be surprised if fuel flow is lower at 12000 ft than at 8000 ft. Most non aspirated planes have their sweet spots somewhere in between that range. But my guess would be for wind.

Likewise, the fact that they did that suggests that the flight was normal at that stage unless the climb was to somehow coax range out of a non-optimum fuel situation.

Mooney_Driver
LSZH, Switzerland
28 Posts
This thread is locked. This means you can't add a response.
Sign in to add your message