Flying vacation in Portugal: a paean of praise

We had been to Portugal twice before, once to Lisbon for an extended weekend (landed in Cascais, LPCS) and once in Funchal, Madeira (LPMA) on our way to the Canary Islands. However, both were one-stop IFR flights, so this time we decided we wanted to fly around the country a bit and we really enjoyed it a lot – as a tourist destination, as well as with respect to flying.

Despite the language being terribly difficult, it is very easy to get along as almost everybody speaks at least some English, in fact often very good. We do speak Spanish which helped once or twice, but it wouldn’t have been a major problem without. 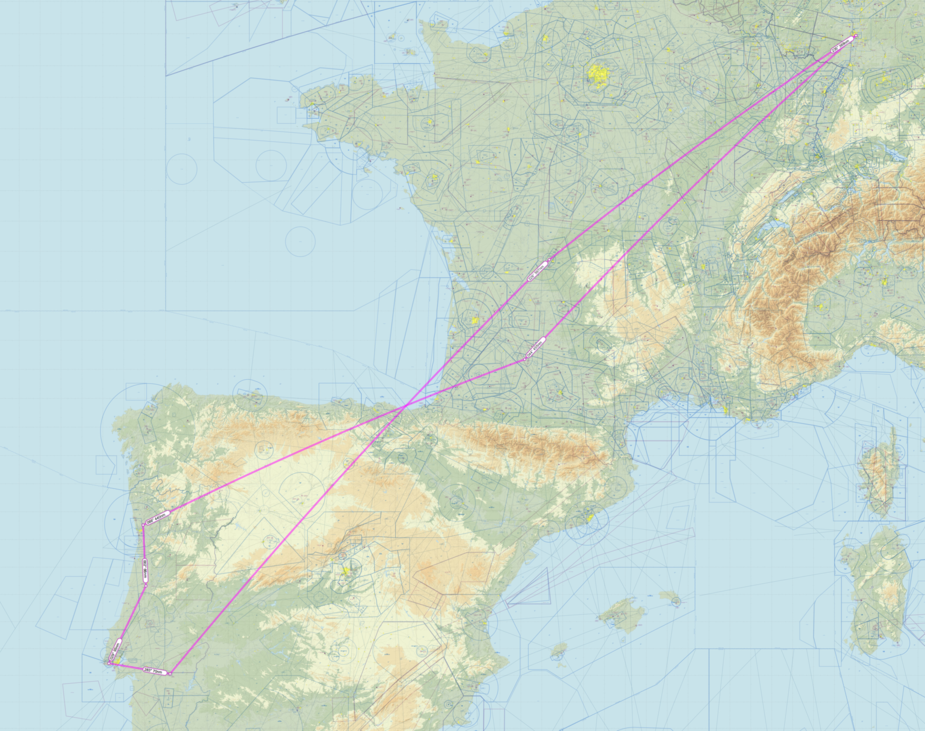 The flights within Portugal were all VFR, so we checked the Portuguese VFR Manual A few things may be worth mentioning: Coimbra and Vilar de Luz are not mentioned in the Portuguese AIP and SkyDemon doesn’t show plates for them. However, there are plates in the VFR Manual. Moreover, there are so-called VFR tunnels defined in the vicinity of Lisbon and Porto. These are prescribed tracks with prescribed altitudes in either direction in C airspace. You need a FPL to fly them but AFIL is explicitly mentioned as possible. We didn’t try, though – we used SD to file and it worked flawlessly. During all our flights OCAS we were in contact with Lisbon Information and otherwise with the respective approach controllers. All were friendly and helpful. They do use names of places you may not be familiar with or you don’t understand. For example the city of Setúbal is pronounced like Shtoobl. However, they seem to know about these things and once you say “standby” and try to locate Shtoobl on the map, they come up with something more appropriate.

Besides the official VFR Manual there is a site set up by Portuguese UL pilots which describes all air strips in the country. It features approach pictures but it’s Portuguese only.

Flying IFR in Portugal is straight forward. Only once we had a little dog leg in our routing but we werte given the shortcut without asking.

The first day of the trip was filled with a lot of flying and bad headwind. First to Limoges, where there were some low clouds. But we met this guy, which we had never seen before: The second leg looked promising, here is autorouters’s interpretation of the GFS data: 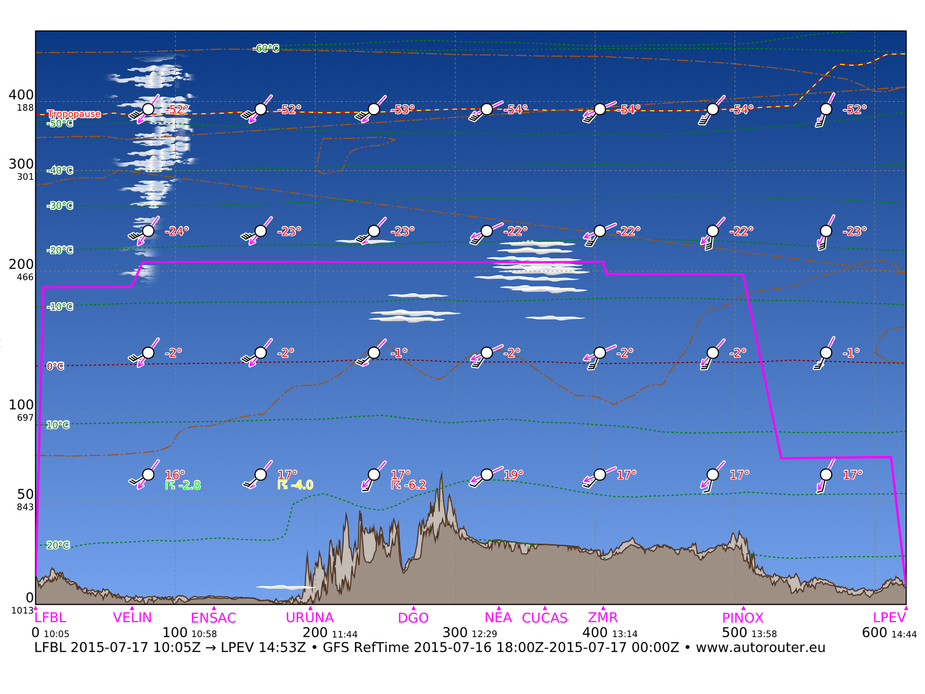 Reality was different, though. Near ZMR we entered some clouds in FL190 which looked like cirrus. At about -5°C it was quite warm. I think it would have been possible outclimb the clouds or at least to get up into much cooler air (our 252 is certified up to FL280). I don’t like flying that high and a knew descending into warm air was very easy, so I just did nothing. I mean, these clouds had no right to be there, I had read the forecast! Nothing happened for about 10 minutes when we noticed clear ice building up very quickly. Being so complacent, I had even forgotten to switch on prop heat. When I finally did, there was quite noticeable roughness but it disappeared not too long after I had hit the switch. Probably ice melted off the blades at different speeds. Airspeed didn’t come down more than 5 knots, but we made it clear to ATC that now we were keen to descend. No problem, at FL120 we were below the clouds at about +2°C: TAS was not as good as up higher and headwind wasn’t much better, so it took even longer, but finally we reached Évora: Landing and parking fees are very modest, only a few Euros and there is Avgas, but we didn’t refuel. Taxis are affordable in Portugal, one from Évora’s airfield to town costs less than 10€. These guys are probably not members here at EuroGA. One of the rather odd sights there is the chapel of bones. It was apparently built to remind GA pilots of the dangers of icing. Our first VFR flight took us to Cascais two days later. Here we had to fly the VFR tunnel. 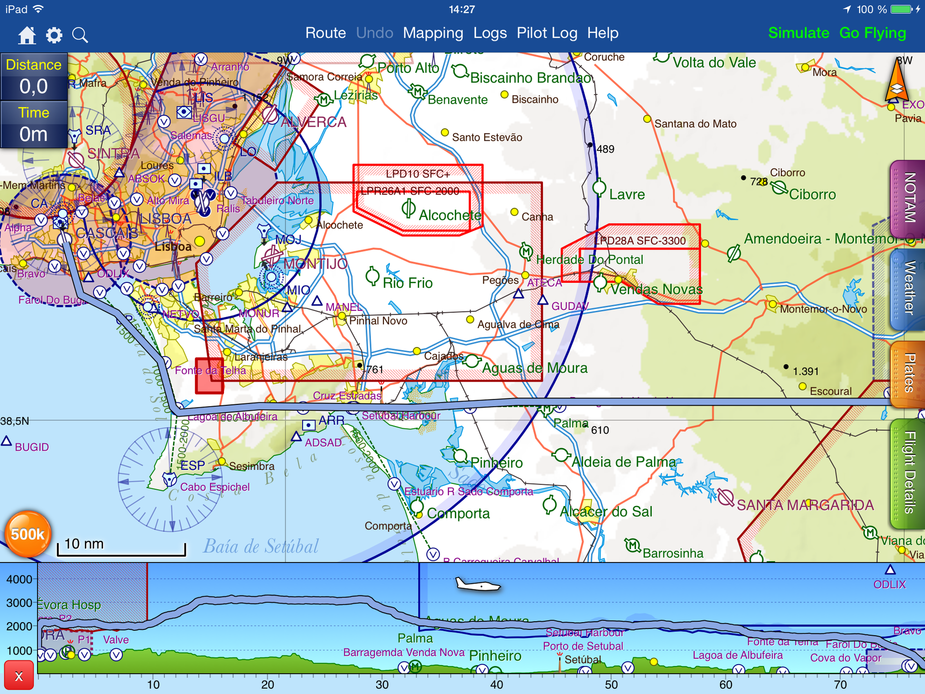 Already after we had turned north, along the coast. LPCS is not exactly a cheap place, landing and parking sums up to more than 70€ for three days. We didn’t refuel this time, but last time Avgas was expensive, as well. A Taxi to Lisbon is about 20€. To Sintra it’s about the same while it is much cheaper to Cascais or Estoril. It’s a stupid idea to take a taxi to the next train station and continue to Lisbon from there, as we did last time. It takes forever and saves less than five Euros.

There is a lot to see and do in this area. The seaside resort towns of Cascais and Estoril are very close by. Here is how they look at night, with Lisbon glowing in the distance: Lisbon is one of the most spectacular capitals in Europe, with attractions of all kinds. Not to forget the Lisbon-style grilled sardines, a dish I love a lot. Have them with some Alentejo white! Finally Sintra features many sites, most prominently the national place with its unique chimneys. For the next leg we thought about some sightseeing along the Tejo, but our Portuguese friends told us that there is no chance to get it. There is a VFR route south of Lisbon but only for helicopters. So we took the route along the coast. It was very very bumpy, it’s hot and always windy in LPCS.

This is Cabo the Roca, the western-most point of continental Europe: Approaching LPCO, where there are no landing fees. There is simple but good restaurant at the field which was crowded with locals. Bacalhau is very popular. They have Avgas in LPCO and at 2.40€ it’s affordable. However, no credit cards accepted and we didn’t have enough cash to pay! A very kind Portuguese pilot who tows banners around central Portugal took me to the next ATM and back. And off he went. And we could get our Avgas from this old army fuel truck. Coimbra again is reachable by taxi at a reasonable price. It is a lovely city famous for its university high upon the hill. No vacation would be complete for us without a few days of hiking, so we took a rental car and drove to the Sera da Estrela national park. There are many trails in the park, often well marked with cairns. You can hike here for a whole long day without meeting more than one or two other parties. Our last stop was Vilar de Luz, the most convenient GA field to visit Porto. It’s quite far from the city, a taxi ride costs about 30€. The runway in LPVL is in terrible shape but there is no landing fee. Porto is nice, but by far not as good as Lisbon. And of course, one has to taste the famous wine. The way home was in perfect weather and we had a nice view of San Sebatián. Refueling in Agen was easy. You need the help of a “Pompier”, he is a friendly fellow but mind the service hours. Avgas was 1.85€ Finally our bird is back in the hangar. So if you want to fly in lovely country with friendly ATCOs, meet nice people and eat some heat food, fly down to Portugal!